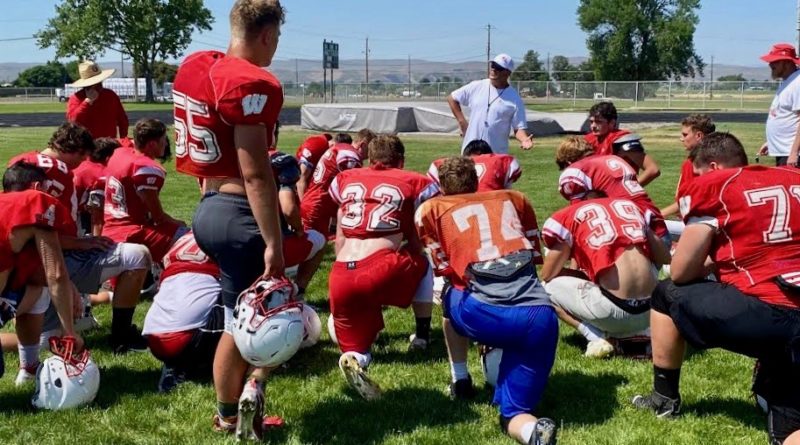 Tom Harrison doesn’t display any football-related trophies in his ranch 25 miles outside of Weiser.

He doesn’t wear any rings or have any pictures hanging on his walls of any of the 10 Gatorade baths he’s taken during his nearly four decades of coaching.

The Weiser High School football coach said he doesn’t need all the glitz and glamour that comes with arguably being the best to ever roam the sidelines in Idaho.

Harrison will be taking his fourth different program to a state title game Friday when his Wolverines play three-time defending champion Sugar-Salem in the Class 3A finals at Holt Arena in Pocatello.

And while it is Weiser’s shot at a third state championship in school history, none of these players were alive when the Wolverines defeated Marsh Valley for the A-2 (now known as the 3A) title.

Fortunately, their coach has been through this a few times. It is Harrison’s 16th trip to a state championship game – 15th as the head man. And his teams have won it all 10 times.

Yet, all those state titles are hardly mentioned around the Weiser program.

“He doesn’t think of himself that way,” Weiser senior quarterback Brett Spencer said. “He knows his successes, but he doesn’t act like he’s some big-time hotshot when he easily could be. It’s more about relationships with him.”

Harrison’s career began in 1981 when Ririe High School took a chance on a wide-eyed 22-year-old fresh out of playing college ball at the University of Montana Western. As might be expected, it didn’t go very well.

The Bulldogs won one game that season.

“I was totally not prepared,” Harrison said with a laugh. “I didn’t like that feeling.”

So, Harrison studied up.

He attended clinics and got his hands on as many coaching books as possible. From how-to guides to autobiographies of legendary coaches, Harrison read them all (and he typically read the books within a few days in order to send them back with the 10-15 day free-trial period).

All that legwork paid off – with the first championship, and the creation of an offense that terrorized opposing teams for decades to come.

Harrison won an 8-man state title with Raft River in 1986 before moving 110 miles up Interstate-86 to Snake River High School a few years later. It was there he became a legend with his Snake T offense – a blend of the run-based Wing-T and veer offenses.

He won another state championship in 1990, but that was only the beginning. The Panthers added back-to-back titles in 1995-96 and put together a 34-game winning streak that ended in a 17-14 loss to Marsh Valley in the 1997 semifinals. But they started another one the very next year, which ended up getting them national attention.

Snake River won 54 consecutive games from 1998-2002, including five consecutive state championships. The 54-game winning streak is the longest in Idaho history, and was the best in the country by a public school at the time, according to the Idaho Statesman.

“Plain and simple, he’s better than the rest of us,” said son and Snake River coach Jeb Harrison, who played and coached on those undefeated teams. “I’m never going to compare myself to Tom’s records, because that’s just not in the cards in the future. We’re not going to win 54 games in a row, and probably no one here in the state will ever again. It’s a thief of joy if you try to compare yourself to something like that.”

Tom Harrison left Snake River and went one town over to Pocatello at the end of that 2002 season.

In just his second season, he took the previously long-struggling program to the championship game. The Thunder made it there the next two years as well, winning the first title in 12 years in 2006. They’re also the last 4A team to beat 11-time 5A state champion and rival Highland.

While Harrison went 79-41 in 12 years, his time there ended unceremoniously.

He resigned following the 2014 season after he was suspended and banned from attending his team’s games by the Pocatello School District for allegations of verbal abuse. Harrison refuted those claims.

“It certainly was a challenge and a struggle,” Harrison said. “But you grow from those kinds of things, and in the long run, what doesn’t kill you, makes you stronger. So I’m just really grateful to still be doing what I like to do, and what I have now.”

Harrison took a break from the spotlight and moved out west to join Emmett’s staff in 2015. He helped the Huskies win the first state championship in school history (3A) under Mike Schroeder that season.

“It was a refresher,” Harrison said. “I think it ultimately made me better.”

Renewed and refocused, Harrison applied and landed the job at Weiser in 2018. He inherited a program that hadn’t had a winning season in seven years. Harrison led them to a 5-4 record and a playoff appearance that first season. The Wolverines started out 7-0 and ended a 15-game losing streak to rival Fruitland the following year.

They have six playoff wins since Harrison’s arrival, matching the school’s overall total from 2010-2016.

“There’s definitely a secret,” said Jeb Harrison, whose Snake River team lost to Weiser, 21-0, in this year’s 3A quarterfinal round. “I thought for sure that I understood my dad’s offense, and I had a good idea of what he was going to do. But Tom’s changed. He developed his own offense this year, and it’s something I haven’t seen before and nobody else is doing. He’s developed his stuff on his own. It wasn’t like he took it from somebody else.”

Others have certainly borrowed from him.

Variations of Harrison’s have been used by many coaches throughout the state, including by his opponent Friday. Sugar Salem coach Tyler RIchins’ father is Dwight Richins, who won five state championships with Shelley and Teton. Harrison personally taught the Snake-T to Dwight, who passed it down to his son.

While Harrison says his studies and schemes have played a part, he gives more of the credit to every staff member and players like Spencer, whom he’s entrusted to call plays this season.

“It’s huge because he’s the kind of guy that wants things done a certain way,” Spencer said. “So, for him to kind of turn that over to me is pretty awesome. It’s really made our relationship grow because we spend a lot of time talking about what things work, (and) when and when to run certain plays. So, him giving me that responsibility has just been a huge blessing.”

“There’s so many things that there’s just no way you can put your finger on it and say, ‘That’s the secret.’ Because there really isn’t,” Harrison said. “It comes through study, effort, vigilance, patience and toughness. You have to be yourself. You can’t go out there and coach like another coach. You can’t be fake. Kids will see right through that.