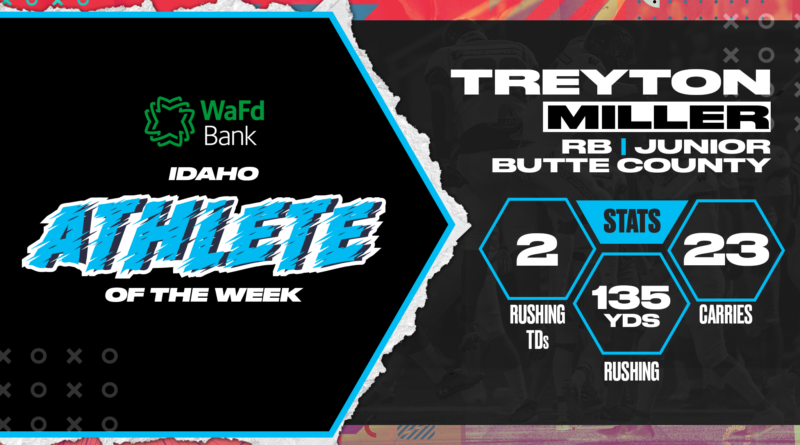 Congratulations to Butte County running back Treyton Miller for being voted SBLive’s WaFd Bank Idaho High School Athlete of the Week for Nov. 1-7!

The junior racked up 135 yards and a pair of scores on 23 carries in a 42-12 quarterfinal win over Notus.

Miller received 45.38% of the vote, beating out Raft River QB Tate Whitaker who finished second with 37.35%. Coeur d’Alene RB Gunner Giulio finished third with 8.34% and Highland PK Ian Hershey finished fourth with 3.91%. There were over 44,000 votes tallied this week!

Kurtis Adkinson, Gooding QB: Used his legs rather than his arm with 143 yards and two touchdowns, including what proved to be game-winner in a 28-21 quarterfinal win over Timberline.

Tiger Adolpho, Rigby QB: The Weber State commit completed 13-of-17 passes for 271 yards and two touchdowns to get the Trojans to the semis for the third consecutive year in a 41-14 win over Capital.

Payton Beck, Oakley QB: Passed for three touchdowns, while running for another two scores in an 80-36 rout over Genesee in the quarterfinal round.

Cage Brokens, West Side RB: Ran for 156 yards and a touchdown on just three carries, while also having one of the team’s five interceptions in a 48-8 quarterfinal victory over Grangeville for the Pirates’ 30th win in a row.

Ian Duarte, Eagle WR: Tallied a game-high eight receptions for 168 yards and a 72-yard touchdown with two minutes and 35 seconds left in a 23-14 win over Coeur d’Alene for the Mustangs’ first playoff road win since 2009.

Tayten Gillette, Gooding RB: Chalked up 129 yards and a pair of touchdowns on 18 carries in a 28-21 quarterfinal win over Timberline.

Gunner Giulio, Coeur d’Alene RB: Recorded 196 yards and a touchdown on the ground, five receptions and an interception in a 23-14 quarterfinal loss to Eagle.

Carson Harris, Sugar-Salem RB: Made the most of his 12 carries with 101 yards and all three of the Diggers’ touchdowns in a 22-16 come-from-behind quarterfinal win over Marsh Valley.

AJ Hill, North Fremont RB: Galloped for 266 yards on just 16 carries, while also having 66 receiving yards in a 44-38 quarterfinal win over Melba.

Hayden Kincheloe, Homedale RB: Terrorized South Fremont on the ground all day with 256 yard and four touchdowns on 24 carries in a 35-10 quarterfinal win.

Corbin Meisner, Meridian DL: Notched two of the six turnovers the Warriors forced against No. 1 Mountain View with a fumble recovery and an interception in a stunning 35-6 quarterfinal win.

Burton Park, Firth WR: Hauled in a 20-yard touchdown catch in the corner of the end zone on a fourth-and-19 with 30 seconds left in a 20-16 quarterfinal win over Declo.

Ryan Payne, Pocatello QB: Threw for 225 yards and three touchdowns as the Thunder erased an early 14-0 hole in a 28-17 quarterfinal win over Bishop Kelly.

Connor Simpson, Carey RB: Racked up 305 yards and two touchdowns on 26 carries to help the Panthers advance to the semifinals for the eighth year in a row in a 60-14 win over Mullan-St. Regis.

Cy Wareham, Genesee WR: Hauled in 11 catches for 190 yards and a score in the first half before a knee injury sidelined him in the second in a 80-36 quarterfinal loss to Oakley.

Tate Whitaker, Raft River QB: Combined for 338 yards and six touchdowns, including 214 yards and four scores on the ground, in a 63-22 quarterfinal win over Potlatch.

Titus Yearout, Lapwai QB: Put up more than 500 yards of total offense and nine touchdowns himself, including 254 yards and four scores on the ground in a 68-36 quarterfinal win over Prairie, which beat Lapwai 58-26 in the regular season.