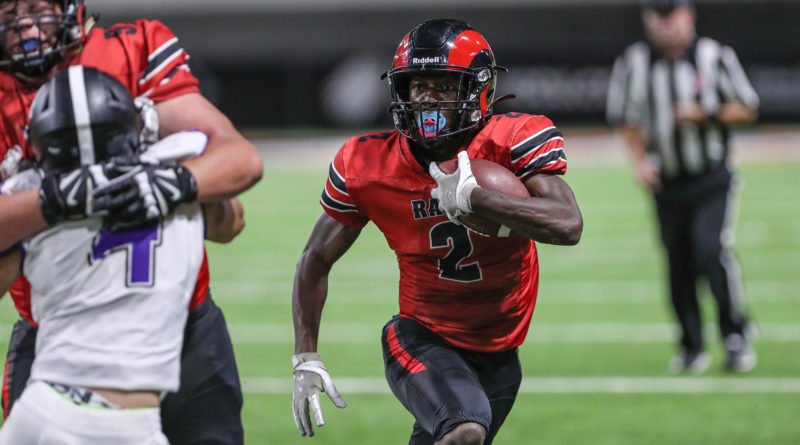 It’s something the longtime Highland High School football coach of 21 years has personally relayed to his multiple-time all-state and record-breaking kicker.

But Hershey continues to back it up.

A week after setting a state record, and hitting a game-winning field goal – Hershey did it again with his 41-yarder as time expired to send the fifth-ranked Rams to their fifth Class 5A title game over the past nine years in a 29-27 win against No. 4 Eagle in a semifinal game at Thunder Stadium.

Highland (10-2) will play Rigby (10-1) for the 5A state championship next week at Holt Arena in Pocatello.

It’s been a mind-blowing two weeks of action for Hershey, who booted a 58-yard field goal – the longest in state history – in a quarterfinal win over Rocky Mountain. And now two game-winning kicks.

“He’s not afraid,” Mariani said. “He loves the pressure.”

Even when the entire Eagle section was mocking and laughing at him.

After the Mustangs (9-3) tried to ice him with a timeout with four seconds remaining, Hershey wanted to stay warm. So after walking around and swinging his arms back and forth, Hershey attempted a practice kick. He slipped on the wet turf and landed right on his backside, prompting Eagle fans to erupt in laughter.

But Hershey immediately got up, turned toward them and raised his hands to bring it on.

He got the last laugh, too: The kick sailed through the uprights with plenty of room to spare. The stadium fell silent as Hershey ran up and down his own section in jubilation.

“I feel like that only happens once a season,” Hershey said. “Two times in a row, in a quarterfinal and a semifinal, means a lot to me. I really hope people see that and I hope it’s a good way to keep getting my name out there, for sure.”

Hershey has offers from Idaho State and Sacramento State. He received the latter after last week’s showing. Hershey, who has visited FBS schools such as Boise State, booted in three field goals for the second week in a row. They all came in the second half when the Rams needed them most after being held out of the end zone.

Highland went up 20-7 after senior wideout Raimon Barela hauled in a 15-yard pass from senior quarterback Jack Whitmer with 2:55 to go in the first half. Barela had just corralled in a 40-yard touchdown reception less than nine minutes earlier. The Rams also scored on their first drive of the game on Whitmer’s 11-yard strike to Fischer Anderson.

Eagle seemingly snatched the momentum, though. Halfback Roy Hull barreled his way in from a yard out with 57 seconds until the break before speedster Ian Duarte, who has an offer from Arizona, torched Highland’s defense for the second time. He turned a simple slant route into a 90-yard touchdown catch to give the Mustangs their first lead of the game, 21-20, midway through the third quarter.

Duarte also had a 73-yard grab late in the first quarter. He finished the game with 252 yards of total offense on just six touches.

However, the Rams weathered the storm and leaned on Hershey. He connected on kicks of 21 and 52 yards, the latter extending the Rams’ lead to 26-21 with 6:32 to go.

But quarterback Jack Benson gave Eagle the lead right back on a 42-yard scramble with 3:18 remaining. Worst yet, the Rams got backed up to their own 7-yard line after a holding call on the ensuing kickoff.

But they did not panic, especially knowing all they really had to do was cross midfield to get into Hershey’s kicking range.

And Highland did what it had done effectively all night – run the football (305 yards). It gashed the Mustangs one last time with 77 yards on nine consecutive run plays.

“We don’t give up,” Barela said. “No lead is safe with us right now. We’ve been playing the best we’ve ever played and I’d say we’re sitting pretty good going to the state championship.”

And Hershey, who is now 18-for-21 on field goals this season, took care of the rest.

Highland, which finished the game with 457 yards of total offense, will now play for the state title for the 20th time since 1984. This will be Mariani’s 11th appearance himself.

“When they play for Highland, there’s expectations,” Mariani said. “I’ve always told them, ‘Listen, the road to the state championship will always go through Highland.'”