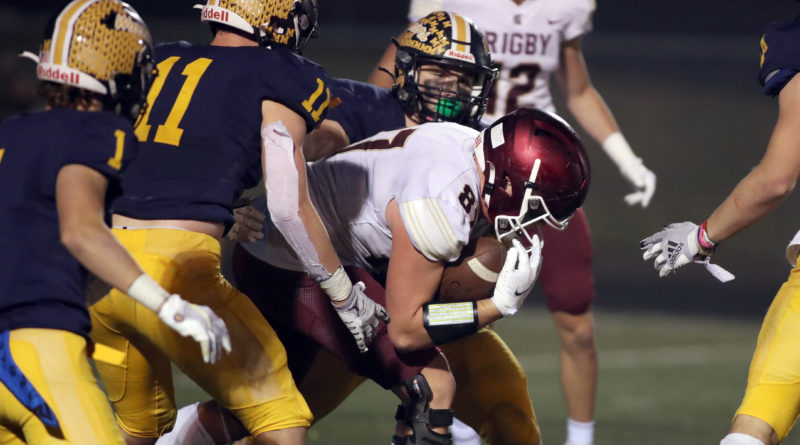 MERIDIAN – In an instant classic at Meridian High School, one stop was all it took for Rigby to punch its ticket to the Class 5A state football finals.

Seventh-ranked Meridian scored touchdowns on its first seven possessions of Friday’s state semifinal, including two in overtime. But the Warriors began triple overtime with a sack, and Malakai Martinez’s fourth-down throw to Quentin Riley was broken up by Ryder Thompson in the end zone.

Unwilling to leave it to the kicking game, No. 2 Rigby opted for a quarterback keeper with star Tiger Adolpho on fourth-and-goal from the 2. Adolpho’s Superman-like dive took him into the end zone, a fitting end to a wild 55-49 Trojan’s victory.

Adolpho threw for 248 yards, ran for 76 and accounted for six touchdowns (four rushing, two passing). The Weber State commit was so exhausted after scoring the game-winner that he nearly passed out on the sidelines.

“Oh yeah, I knew he got it,” Rigby running back Zheik Falevai said of the final play. Falevai had a big game himself, carrying it 28 times for 162 yards and two touchdowns.

“We trust all of our guys, so when it goes in anyone’s hands, it’s money.”

Meridian (8-4) pulled even at 35-35 on a Kross Antonnacchi 5-yard touchdown run with 1:50 remaining in regulation. Rigby (10-1) blocked the ensuing PAT kick, then flirted with getting into field-goal range before time ran out.

It was the Warriors’ only stop of a game that featured no punts or turnovers.

Both teams scored in the first overtime and failed to convert their PAT kicks. In double overtime, both notched touchdowns and two-point conversions.

The Rigby defense finally made a play with a first-down sack of Martinez in the third overtime. It came down to a fourth-and-goal from the 11, and Thompson dislodged the ball from Riley in the left corner of the end zone.

“Ryder’s been balling out all season,” Falevai said. “He’s a lockdown corner for us.”

Rigby ran behind its gigantic offensive line to finish off the game, and earn a rematch with Highland in the 5A state championship game. The Trojans defeated the Rams, 44-21. back in October.

“We’re all excited ,and it’s going to be a blast,” Falevai said.

It was a bitter end to a successful season for the Warriors, who won their first playoff games since 2007. Meridian’s four losses were by a combined 11 points.

“We wanted to change this program, and we really did, I hope,” Antonnacchi said. “Next year, my boys are going to keep doing it. The studs are there, so we’ll be good.”