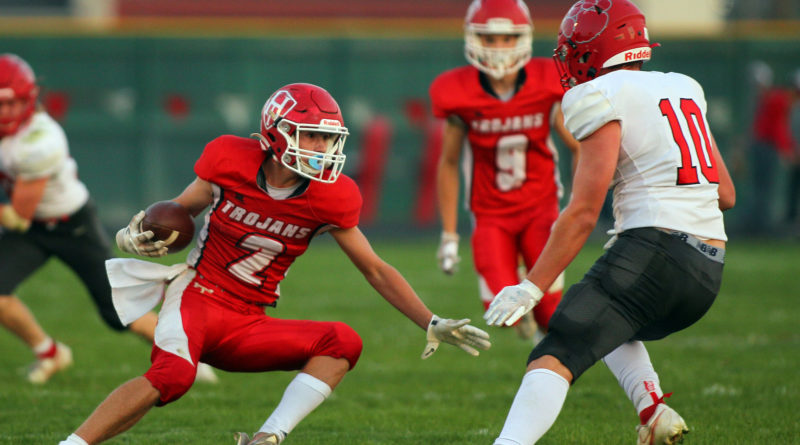 Here is an inside look at the top high school football games across the state of Idaho during the 12th full weekend – or semifinal round of the state playoffs – of 2021 (all rankings are from end of regular season):

About the Rams: They enter their fourth semifinal in the past five years after knocking out reigning state champion Rocky Mountain, which had won two out of the past three state titles. They’ll now look for their third state final appearance over the last five years. But it won’t be easy against arguably the hottest team in the 5A right now. However, QB Jack Whitmer (2,691 yards, 27 TDs) and K Ian Hersey, whose range seems limitless, give them a great chance.

About the Mustangs: Eagle extended the classification’s longest winning streak to seven games by snapping Coeur d’Alene’s run of semifinal appearances at four. So the Mustangs enter their first final four in five years with a ton of confidence – even without injured leading rusher Deegan Martinho. That’s because QB Jack Benson (2,023 passing yards), RB Roy Hull (605 rushing yards) and WR Ian Duarte (910 receiving yards) have more than picked up the slack.

Game nugget: First ever meeting between the two teams.

About the Trojans: Rigby regained its swagger in a 41-14 quarterfinal blowout of perennial contender Capital. It’s a good thing, too, because the Trojans will need it against a red-hot Meridian team brimming with confidence after annihilating No. 1 Mountain View. Weber State commit Tiger Adolpho (152-225, 2,176 yards, 21 TDs; 485 rushing yards, seven TDs) might be the best quarterback in the state, and has accounted for multiple touchdowns in every game this fall.

About the Warriors: The last time the Warriors were in a state semifinal (2007), a banner came home with them. That could very well be the case again if last week was any indication. They dismantled the state-favorite Mavericks with their top-ranked defense (10.6 ppg and 29 turnovers) with six takeaways alone. But the Warriors can also beat teams offensively with QB Malakai Martinez, RB Kross Antonnacchi and WRs Davis Thacker and Quentin Riley.

Game nugget: Skyline has won the past two meetings by a combined score of 97-7.

About the Thunder: It’s probably time to stop doubting Pocatello (and coach Dave Spillett likes to remind people of that). The Thunder have won their last six games – five by double digits, including a 28-17 triumph over perennial power Bishop Kelly last week. They’re also the only team yet to lose in the 4A classification. QB Ryan Payne has carried the load lately, but expect RB Ryken Echohawk to get going again.

About the Grizzlies: Not that long ago, people were asking, “What’s wrong with Skyline?” The defending champs were 1-3 – the worst start in nine years. Now the Grizzlies are one win away from playing in their fourth title game in the past six years. The turnaround has been sparked by their fifth-ranked defense (16.7 ppg; hasn’t given up more than 21 points in past four games), along with QB Lachlan Haacke (1,716 yards, 26 TDs) and WR Kenyon Sadiq (843 yards, 14 TDs).

Game nugget: Rematch of the past three state title games, all won by the Diggers.

About the Diggers: The sky seemed to be falling for the reigning champs at 0-2 – the worst start since 2004. But since then, Sugar-Salem has shown it is still the team to beat with seven consecutive wins, six of them by double-digit margins. And the Diggers defense hasn’t allowed more than 16 points in any of those wins. They also have a proven offense with RB Carson Harris (730 yards, 11 TDs) and WR Jonah Schulthies (506 yards, four TDs).

About the Trojans: This isn’t the state championship game. But for Homedale, it almost has to feel like it. The Trojans have lost three consecutive times to the Diggers. However, this one is in their backyard – a place they haven’t lost at in 1,867 days. Homedale also has perhaps the best running back in the state in Hayden Kincheloe (1,547 yards, 22 TDs), and a defense that’s had three shutouts and allowed 82 points the entire season.

Game nugget: Gooding has won two out of the past three meetings.

About the Wolverines: This is the furthest Weiser has been in a decade. And it doesn’t plan on stopping here – not with the classification’s best scoring offense (40.8 ppg) and a future FBS quarterback at the helm in Brett Spencer. Their lone loss was a 14-6 defeat to top-ranked Homedale on the road, so they know how to battle the fellow top dogs. And coach Tom Harrison knows a thing or two about winning this time of year with 10 state titles to his name.

About the Senators: Gooding is in the 3A semifinals for the first time in four years after three consecutive losses in the quarterfinals. Now the Senators are seeking their first state championship game berth since 2015. But this will be by far and away their toughest test to date. However, with senior Colston Loveland (852 yards, 14 TDs) – the ninth-rated tight end in the country and a Michigan recruit – along with QB Kurtis Adkinson (2,715 yards, 35 TDs), they’ll be more than ready for it.