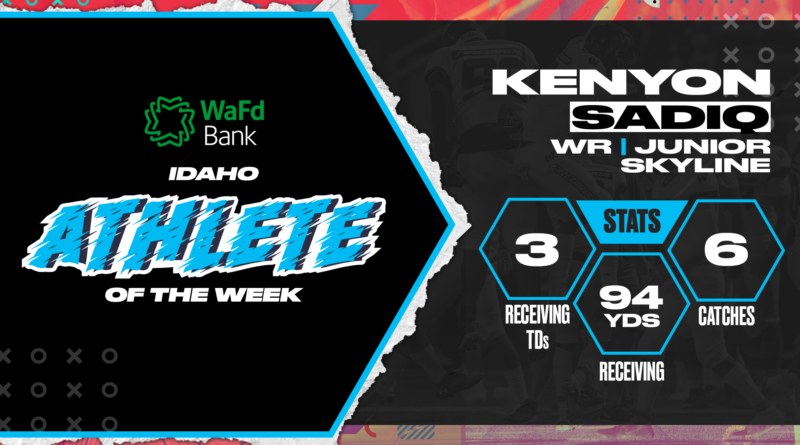 The junior bagged six catches for 94 yards and three touchdowns, while also adding a 1-yard scoring run as the Grizzlies doubled up Lakeland 42-21 in their first-round playoff matchup.

Sadiq received 40.12% of the vote, beating out Blackfoot QB Jaxon Grimmett who finished second with 21.47%. Nampa RB Daniel Carrillo finished third with 21.25% and Skyline Girls Cross Country’s Nelah Roberts finished fourth with 7.56%. There were over 15,000 votes tallied this week!

Kross Antonnacchi, Meridian RB: Antonnacchi came up just 1 yard shy of 100 yards, but did score two rushing touchdowns and a receiving one in a 47-28 win over Madison for the Warriors’ first playoff win in 14 years.

Jason Buss, Bishop Kelly WR: Buss hauled in four passes for 118 yards and a pair of scores in a 49-21 win against Twin Falls in the first round of the 4A playoffs.

Daniel Carrillo, Nampa RB: Carrillo galloped for 177 yards and two touchdowns on 29 carries to lead the Bulldogs in a 37-29 upset over No. 3 Emmett in the opening round of the 4A state tourney.

Ben Dredge, Madison QB: Dredge went 21-of-27 for 257 yards and a touchdown, while running for 99 yard and three touchdowns on the ground in a 47-28 first-round loss to Meridian.

Santi Diaz, Vallivue QB: Diaz totaled three scores, including a 27-yard touchdown pass on a fourth-and-27, and nearly 200 yards of offense in a 28-12 stunner over No. 1 Minico in the first-round of the 4A playoffs.

Jaxon Grimmett, Blackfoot QB: Grimmett threw for 407 yards and three touchdowns in a 52-24 rout over Middleton in the opening round of the playoffs.

Krue Hales, Pocatello DB: Hales put the game away with a 100-yard interception return for a touchdown in the closing moments of a 24-6 opening round win over Bonneville.

Tyler Howard, Potlatch RB: Howard notched 172 rushing yards and three scores on 16 carries, while also corralling in a touchdown catch in a 46-8 first-round win over Grace.

Angus Jordan, Genesee QB: Jordan completed 21-of-30 passes for 303 yards and four touchdowns in a 62-36 first-round win over Murtaugh.

Ja’Vonte King, Blackfoot WR: King brought in 10 catches for 197 yards in a 52-24 drubbing over Middleton in the first round of the state tournament.

Seth Knothe, Bishop Kelly RB: Knothe came up just shy of a 200-yard game with 196 and four touchdowns on the ground in a 49-21 first-round playoff win over Twin Falls.

TerRyck Pennington, Skyview WR: Pennington had nine catches for 222 yards and three scores in a 45-28 5A playoff lost to Highland.

Cody Power, Dietrich WR: Power had not one, not two, not three, not four, but five touchdowns in a 60-38 first-round win over Council.

Marcus Staley, Camas County WR: Staley chalked up three touchdown catches, including the game-winner with 30 seconds remaining in a 42-36 upset over No. 3 North Gem in the first-round of the 1A DII playoffs.

Dillon Stosich, Melba WR: Stosich posted four receptions for 145 yards and a touchdown in an 18-12 first-round win over West Jefferson.

Kody Walk, Capital DE: Tallied five sacks, while having 10 carries for 84 yards and two touchdowns on offense in a 44-13 5A first-round win over Lewiston.

Cy Wareham, Genesee WR: Wareham pulled in nine catches for 202 yards and two touchdowns, with a 65-yard pick-6 in a 62-36 playoff win over Murtaugh.

Jack Whitmer, Highland QB: Whitmer combined for 250 yards of total offense and five touchdowns, including 73 and three scores on the ground in a 45-28 opening round win over Skyview.