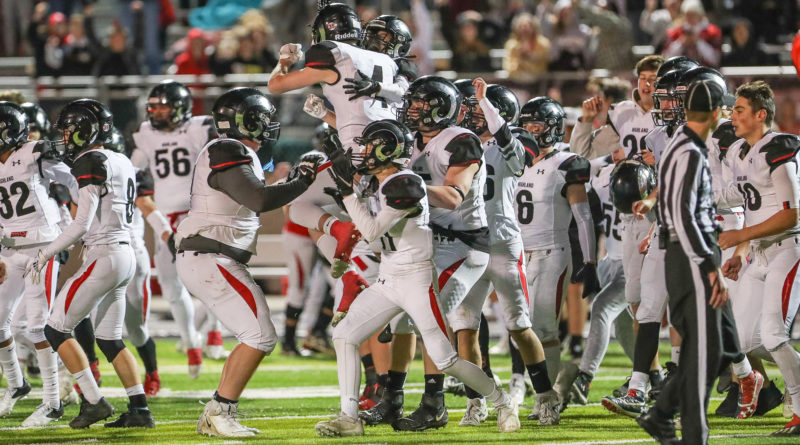 MERIDIAN – Ian Hershey was only looking for one person after Friday night’s game.

Jeremy Hershey, who doubles as his kicking coach, eventually found his son, and the two of them embraced.

“That was probably the longest time I’ve ever hugged him,” Hershey said with a grin.

The two had plenty to celebrate.

Hershey set a state record on a 50-yard field goal, broke his own record later in the night on a 58-yarder and then his gut-punch shot from 45 yards ended up being the game winner in the fifth-ranked Rams’ improbable 22-21 come-from-behind win over reigning state champion Rocky Mountain in the Idaho Class 5A quarterfinals Friday night at Brighton Stadium.

“I’ve been working all summer (with) these camps I go to. I get a lot of pressure during (them),” Hershey said. “I’ve really just been preparing for this moment.”

But it appeared as if Hershey wasn’t going to get that moment with the Rams trailing by 18 points less than four minutes into the third quarter.

Highland had held tough, down 7-3 at halftime. But the No. 3 Grizzlies opened the floodgates at the start of the second half.

Kade Thompson caught a swing pass from Tegan Sweaney for a 30-yard touchdown on their first possession of the half. They then came away with a quick turnover on a Parker Weatherly interception return to the Highland 14-yard line. One play later, Hunter Steacker corralled in a last-second pitch from Sweaney and ran it in for the score to give them a 21-3 advantage at the 8:30 mark of the third quarter.

“We were thinking, ‘We can’t give up,'” said Highland senior quarterback Jack Whitmer, who threw the pick to Weatherly. “There’s always hope.”

Colton George then punched the ball right out of the hands of Lucas Leavitt on the Grizzlies’ first play of the ensuing drive for a turnover, and the Rams took over at the Rocky Mountain 28-yard line.

Highland capitalized when Whitmer connected with Colton Sneddon on a 14-yard scoring fade route to suddenly put his team within one score at 21-16 with 42 seconds to go in the quarter.

“That’s the thing, you gotta have a short memory and keep battling,” Highland coach Gino Mariani said. “He did that and showed some true leadership.”

As did the man of the hour – Hershey.

After breaking Kyle Jackman’s (Highland) 5A record (45), and the all-classification record of 47 yards previously held by Ryan Bloxham, who set it with Burley 31 years ago, with a 50-yard boot for the game’s first points with 1:08 remaining in the first quarter, Hershey missed on his next attempt. His 53-yard try right before the half sailed wide left.

But even with strong wind gusts reaching 30 mph swirling around him, the team’s confidence in him never waived.

“He’s got a crazy-strong leg,” Mariani said. “He’s pretty trustworthy. He works on it so hard and he wants to be very good and he is.”

He followed that up with the 45-yarder that came with even more pressure attached to it, knocking it through with 3:25 to go to give the Rams their first lead since the first quarter.

“He’s a savior” Whitmer said with a laugh.

Highland’s defense then held firm. After the Grizzlies got into Rams’ territory with a little more than a minute left, Kody Colvin made a huge play. The senior defensive end sacked Sweaney for a 7-yard loss back at the Rocky Mountain 44. Sweaney missed on his next two throws before finding Art Williams, who scored on a 3-yard run in the second quarter. But Williams was about 10 yards short of the sticks for a turnover on downs with just 21 seconds to go.

After a Whitmer kneel down moments later, and the celebration was on.

It’s Highland’s first win over Rocky Mountain in four years. The Rams had lost the past three meetings, which included the 2018 state final, last year’s quarterfinals and earlier this season in a 12-7 defeat in late August.

“We wanted this matchup,” Hershey said. “Especially after last year in the exact same quarterfinal spot when they knocked us out. We came into this game knowing it’s the same situation and it’s going to be a fist fight.”