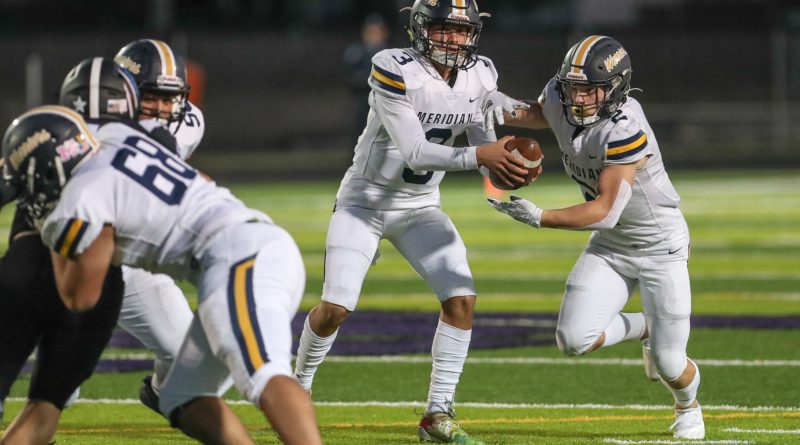 MERIDIAN – Seventh-ranked Meridian found itself in the familiar position of holding a halftime lead at No. 1 Mountain View.

The opening-week showdown ended in a bitter 14-13 loss, a result that the upstart Warriors struggled to leave in the past.

Powered by a ball-hawking defense that forced six turnovers, Meridian avenged its Week 1 defeat with a 35-6 thrashing of previously-unbeaten Mountain View in a blustery Class 5A quarterfinal. The Warriors (8-3) advance to face Rigby (9-1), a 41-14 winner over Capital, in next week’s state semifinals.

“They got us at the beginning of the season, and we knew we could come back,” Warriors junior linebacker Nathan Reynolds said of Mountain View (9-1), which erased a 13-0 halftime deficit in the first meeting between the teams. “In practice, we just had the mindset of ‘They’re not the better team.'”

Despite falling behind 6-0 in the first quarter, the Warriors were clearly the better team Friday night.

Mountain View, fresh off a bye following a rout of Rocky Mountain in the 5A Southern Idaho Conference championship game, punted on its opening possession and grabbed the lead on a 1-yard Dominic Sotomayor run. The Mavericks’ next eight possessions went fumble, punt, fumble, end of half, fumble, fumble, interception, interception.

“When you’re playing a great opponent, you can’t make mistakes and expect to be in a game like this,” Mountain View coach Judd Benedick said. “And it came from people who are usually highly-reliable players for us, so it’s hard to get mad at anybody for anything like that because they’re a big part of the reason you are where you are.”

With the wind helping, Malakai Martinez hit Davis Thacker for a 20-yard touchdown on the first play of the second quarter to get Meridian on the scoreboard. Kross Antonnacchi made it 14-6 at the break with a powerful 4-yard touchdown run.

Meridian’s offense kept the pressure on in the second half while the defense made play after play. The Warriors scored all 35 of their points off turnovers.

“I mean six turnovers in one game, props to them,” Antonnacchi said of the defense. “They stepped it up from last game, they were really upset with how they did. And to let it out on the No. 1 team in the state probably felt good for them.”

It was a bitter end to a memorable fall for the Mavericks, who put together a perfect regular season that included two victories over rival Rocky Mountain.

“It’s just an incredible group of seniors with great leadership,” Benedick said. “All those (accomplishments) are really special, and you can’t take any of that away from them.”