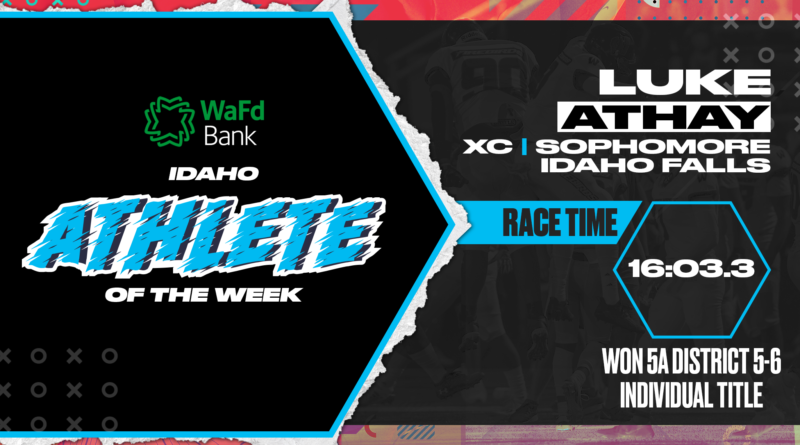 The sophomore won his first career 5A District 5-6 individual title with a time of 16:03.3.

Athay received 45.91% of the vote, beating out Watersprings’ Jrew Plocher who finished second with 26.19%. Sandpoint’s Parker Pettit finished third with 12.85% and Sandpoint’s Tori Pelkey finished fourth with 0.51%. There were over 24,000 votes tallied this week!

Tori Pelkey, Sandpoint Girls Volleyball: Pelkey had a team-high of 7 kills and 3 blocks in the Bulldogs’ loss to Moscow.

Eli Gregory, Blackfoot Boys Cross Country: Gregory repeated as 4A individual champion with a time of 16:18.3.

Elliotte Kortus, Lake City Girls Soccer: The WSU commit scored the game-winning goal in the 77th minute to lift Lake City to a 1-0 win over Boise for its third state title in program history in the Class 5A finals.

Kurtis Adkinson, Gooding QB: Bagged five touchdowns, including four on the ground to help the Senators win their eighth Sawtooth Central Idaho championship in the last 10 years with a 43-6 win over Kimberly.

Jafeth Bendele, Minico RB: Scored all four of the Spartans’ touchdowns to lead them to an undefeated regular season and the Great Basin Conference title in a 26-19 win over Twin Falls.

Jack Benson, Eagle QB: Threw for 175 yards and two scores, while adding another 65 and two touchdowns on the ground as the Mustangs clinched a playoff berth in a 62-14 win over Kuna.

Quintez Evans, Mountain View RB: Carried the ball 37 times for 184 yards and three touchdowns to lead the Mavericks to their first overall 5A Southern Idaho Conference title in a 26-6 win over Rocky Mountain.

Isaiah Griffin, Coeur d’Alene WR: Grabbed seven catches for 109 yards and two touchdowns as the Vikings kept their playoff hopes alive in a 38-7 win over Lewiston.

Bridger Hatch, North Gem QB: Recorded seven touchdowns and in the process, set the school record for most career total touchdowns with 78 in a 62-18 win over Rockland.

Jack Johnson, Genesee RB: Rushed for 101 yards and two touchdowns, while also making his presence known on defense with 8.5 tackles in a 24-22 win over Kendrick.

Jordan Lenz, North Fremont QB: Passed for 120 yards and two touchdowns, including a 48-yard game-winner, while also running for a team-high 71 yards, as the Huskies claimed their fourth straight 2A Nuclear Conference title in a 22-21 win over No. 2 Firth.

Trenton Lorentz, Prairie RB: Averaged more than 10 yards per carry for 142 yards and a score in a 58-16 win over Troy.

Tyler Medaris, Middleton WR: Hauled in nine passes for 152 yards and three touchdowns as the Vikings punched a ticket to state in a 42-20 win over Columbia.

Blayne Meyer, Horseshoe Bend RB: Tallied 136 yards and three scores in a 38-36 win over Council to give the Mustangs the 1A Division II Long Pin league title.

Parker Pettit, Sandpoint QB: Rushed for 172 yards and two touchdowns, with another 103 yards through the air as the Bulldogs claimed their second straight 4A Inland Empire League title in a 37-10 win over Lakeland.

Jrew Plocher, Watersprings QB: Excelled at all facets of the game – running (329 yards, two TDs), passing (111 yards, three TDs), returning a kickoff for a score and took an interception to the house all in a 48-38 win over Challis.

Troy Smith, Camas County RB: Did it on both sides of the ball with 111 yards and two touchdowns to go with seven tackles on defense in an 80-26 win over Hansen.

Tegan Whitaker, Raft River WR: Netted a 60-yard punt return touchdown, a receiving touchdown and nine tackles on defense to lead the Trojans to a 1A D1 Snake River Conference title in a 22-16 win over No. 2 Oakley.

Carter Woodland, Notus RB: Racked up 258 total yards and five touchdowns to help the Pirates claim the 1A D1 Western Idaho Conference title with a 62-19 win over rival Wilder.

Titus Yearout, Lapwai QB: Combined for 324 yards and seven touchdowns, including five scores through the air in a 58-32 win over Potlatch.

Camden Young, Skyview DB: Recorded two interceptions, one of which he returned 98 yards to the barn, and had four catches for 67 yards and a touchdown as the Hawks secured a spot in the playoffs with a 41-14 win over Borah.