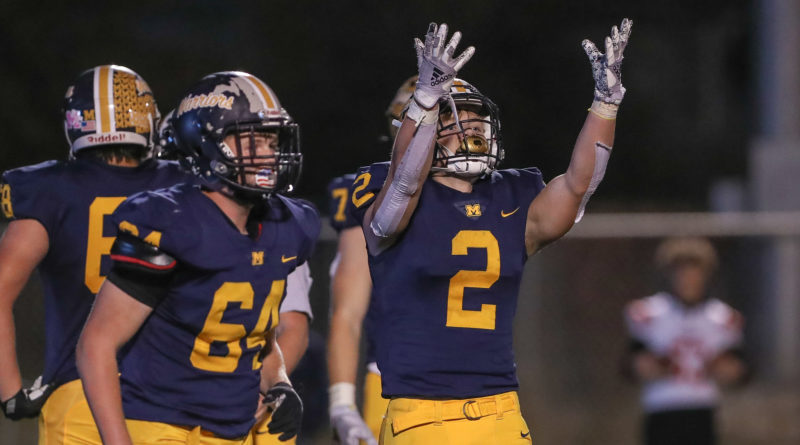 MERIDIAN – As star receiver Davis Thacker and others sat on the bench at the end of the first quarter, Malakai Martinez had a message for the red-hot Meridian offense.

“We’ve been known to start good and end bad,” Martinez said to his teammates. “We’re not ending bad tonight.'”

Unlike early-season games against Mountain View and Eagle, the seventh-ranked Warriors protected their lead Friday and pulled away late for a 47-28 opening-round Class 5A playoff victory over visiting No. 9 Madison. It’s Meridian’s first playoff win since capturing the 2007 state title.

“It’s been a process and a long time coming,” third-year coach John Zamberlin said. “These guys, I’m proud of them because they work extremely hard. … I’m happy for them, happy for the fans, for everybody.”

Twelve months later, Meridian entered the locker room up 26-21 on Madison (6-4). This time, the Warriors finished the job.

“It almost felt like a repeat, and I was glad we could redeem ourselves, come out and show that we are a second-half team,” Martinez said.

The Warriors scored on the opening drive of the third quarter, but Madison answered with a touchdown of its own and forced the game’s first punt on the period’s final play. Trailing 33-28, Bobcats quarterback Ben Dredge was sacked by Holden Armstrong for a big loss on third down. Madison punted it back, and sophomore speedster Marco Del Rio finished the game off with a pair of rushing touchdowns.

Dredge, a tailback turned quarterback, passed for 255 yards, ran for 115 and accounted for all four Bobcats touchdowns (one passing, three rushing). Madison used a five-wide set on nearly every snap.

“It’s a team game,” Zamberlin said. “Defensively this year we’ve done a lot of great things, and there have been times offensively where we’ve struggled. Tonight … the offense was clicking and playing well.”

The victory gives Meridian a rematch with Mountain View (9-0) in next week’s quarterfinals. The Southern Idaho Conference rivals met in Week 1 with the Mavericks earning a 14-13 come-from-behind win.

“They are undefeated right now, they’re riding high,” said Martinez, who suffered a shoulder injury in the loss and missed half of the regular season. “It’s going to be a great game.”