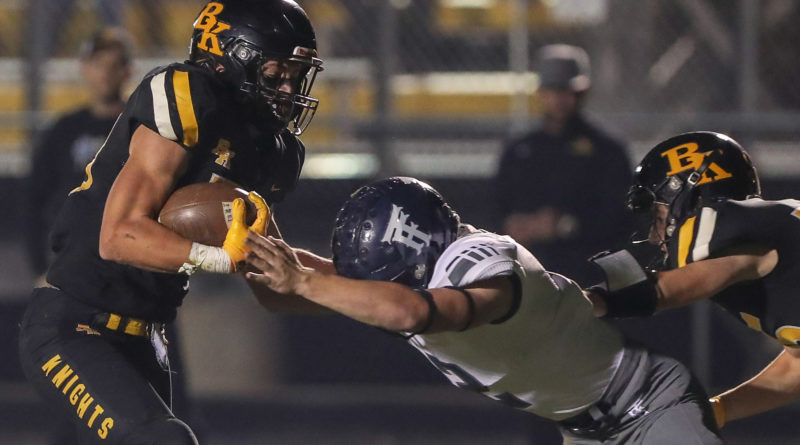 BOISE – The first thing Bishop Kelly coach Tim Brennan said to his team in the post-game huddle was, “Now you guys get to get up and watch film Monday morning.”

The statement got a mixed reaction, at best.

“It’s kind of a bittersweet thing,” senior running back Seth Knothe said while laughing. “… But it means we’re still playing and still going and working towards that ring. So, it’s a great thing.”

Yeah, the No. 4 Knights can’t complain with the results. They made sixth-ranked Twin Falls look like anything but in a 49-21 rout in the first round of the Class 4A state playoffs Friday night at Nick Ysura Field.

Bishop Kelly (8-2) will play on the road against No. 2 Pocatello (9-2) during next week’s quarterfinal round.

“That’s not even the best we got, too,” said senior wideout Jason Buss, who hauled in a pair of touchdown catches. “We saw it out there in the first half. We made some mental mistakes and physical mistakes and that kind of held us back. So, we just want to show the rest of the state that we’re out here and we’re ready to win.”

They jumped out to a 14-0 lead on a 27-yard pass from Hadley Smith to Jack Heffner and on a 3-yard run by Knothe a little more than eight minutes into the game. But a dropped pass by Logan Fettic, who would have scored on a 59-yard pass, opened the door just a bit for Twin Falls.

Teagen Severe returned the ensuing punt 77 yards for a touchdown with 32 seconds remaining in the opening quarter. However, the Knights answered on their next drive on a 4-yard run by Knothe with 7:35 to go in the half.

The Bruins cut the deficit down to single digits again less than a minute later on a 4-yard pass from Austin Crum to Jace Mahlke. Bishop Kelly responded again, though. This time it was a 48-yard pass from Smith to Buss 23 seconds later that pushed the lead to 28-14.

A big second half was correct.

The Knights completely took over with 21 unanswered points in the third quarter, and a lot of it  had to do with the defense. Twin Falls recorded just one first down, and its three possessions of the quarter were punt, fumble and three-and-out.

Bishop Kelly capitalized with two more touchdown runs by Knothe, including one that was set up by a fumble recovery by Jack Marshall. Smith also connected with Buss again on a 66-yard touchdown that basically put the game away at 49-21 with 2:45 to go in the third quarter.

“It takes everyone to win a game,” Smith said. “O-line, d-line, all those people.”

Including Smith, who arguably had his best game of the season. He went 13-for-20 for 227 yards, three touchdowns and zero interceptions in the Knights’ run-heavy offense. Buss caught four of those passes for 118 yards.

“People don’t know a lot about them because we haven’t thrown the ball that much,” Brennan said. “… But it’s not about those stats. It’s about where we end up as a team at the end of the year. And they understand that and that’s what it’s about. That’s what Bishop Kelly football is about – us getting together and then just winning one game at a time.”

It’s also about running the football, which the Knights did well, too. Knothe had another 100-yard game with 196 yards and four touchdowns. The senior did limp off, but returned to the game.

Bishop Kelly is going to need him against the Thunder, too. They’ve won their past five games, and haven’t lost to a 4A team this season. But the Knights, who have won seven consecutive games themselves, will be ready.

“I think it’s just up to us,” Buss said. “The mental and physical mistakes are the only things that can hold us back. But I know, and our team knows, we’re a better team. So we just gotta ride down there and show them who we are.”