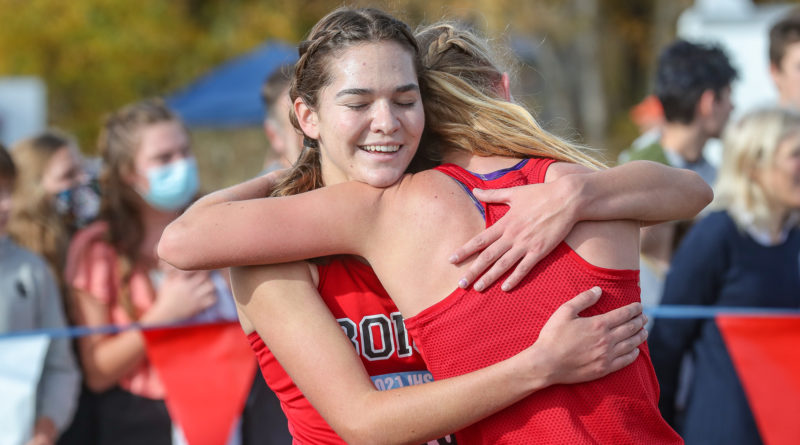 The Boise High School girls cross country coach and his team made some Friday afternoon at Eagle Island State Park.

The Brave four-peated for the first time in program history at the Class 5A state championships. They totaled 27 points – 86 more than runner up Rocky Mountain, and 88 better than Mountain View and Eagle – with six runners placing in the top 12, including individual winner Allie Bruce.

So strong, Idaho High School Activities Association (IDHSAA) officials didn’t even wait for the official results to give the Brave its well-earned hardware Friday.

Boise was without its top three runners at the district meet last week. Bruce and sisters Sammy and Logan Smith all missed the meet because they were playing in the 5A state girls soccer finals. And yet, the Brave still won its fourth district title in a row by 12 points.

“It’s not just our top seven that are good,” Bruce said. “It’s way farther down than that. I’m just so proud of them. They all stepped up and they all did so (well).”

So the only real suspense for the Brave was which one of its runners would win it, Bruce or Sammy Smith? The sophomores had faced off four times this season – with each winning twice.

In fact, Bruce is the only runner in Idaho to beat Smith head to head – and did so again Friday. But she needed the final 200 meters to do so.

They were neck-and-neck down the final straightway before Bruce pulled away in the last 30 meters to win her individual state title in 17 minutes, 47.9 seconds after taking third last year. Smith beat Bruce by 37 seconds last year.

“Honestly, I don’t know,” Bruce said about what the difference was today. “I was happy. I was grateful to be able to run. I love running, so it’s really fun. I tried to focus on that rather than wondering what place I would get.”

Smith was nursing a left calf injury that she suffered in last week’s state soccer final. It didn’t appear to affect her for most of the race, though. However, during the final moments, her face strained and leg buckled, allowing Bruce to win by nearly five seconds.

“Obviously, I would have liked to have a different result,” Smith said. “Especially at the end there. Had I not been injured, I could have tried to kick a little bit harder.

“I couldn’t really run much at all this week just cause it hurt a lot to stride out and stuff. But I’m just glad that I was able to race today.”

Logan Smith (seventh), Annika Zuschlag (ninth), Lydia Nance (11th) and Jamie Hamlin (12th) made up the rest of the score, while Kayla Wiechowski just finished outside of the medal podium in 23rd for the Brave, which makes a case that this is the best in program and state history.

Boise didn’t lose a single race, won by an average of 57 points, is ranked among the top six programs in the country by both Milesplit (No. 4) and DyeStat (No. 6), and at one point, had the second-best average 5-kilometer time in the nation at 17:42.

“You got to look at the last four years, and every team in that group can be considered for the best in Idaho state history,” Olswanger said. “What more can I say?”

It was a fitting sendoff for seniors Logan Smith, a Stanford soccer commit, Zuschlag and Hamlin, who is the most tenured member on the team. She’s the only one who has been a part of all four state championships. Hamlin was an alternate as a ninth grader before running in the past three state meets.

She followed in her older sister’s footsteps, too. Emily Hamiln, who ran at the University of Washington, was a three-time individual state champion. Jamie Hamlin will also run in college, with schools such as Oregon State and Utah showing her interest.

“It’s been such an amazing experience,” Hamlin said. “Cross country and running have just become a huge part of my life, and all four years, I’ve just been able to watch our team grow together and we’ve built up this great team culture.”

A culture that Olswanger started when he came over from Meridian six years ago when Boise was struggling just to make it to state. Fast forward to today, the Brave hasn’t lost to a team from Idaho in 1,462 days – and counting.

Olswanger said a few of his runners will compete individually at the NXR Northwest Regional Championship on Nov. 12-13 at Eagle Island State Park. But Boise will run as a team at the Pacific Northwest Regional XC Showcase in Lakewood, Washington a week later to finish its prolific season.

ROCKY MOUNTAIN REGAINS STATE TITLE: After a two-year absence, the Grizzlies took their place at the top of the mountain again with their fourth state championship in the past six years. They had five runners in the top-15, led by Trent Wigod, who took second, to finish with 40 points – 16 better than Idaho Falls. Boise (81) and Rigby (149) finished third and fourth, respectively.

Idaho Falls sophomore Luke Athay won the individual boys title by 18 seconds with a time of 15:19.8

PRESTON COMES BACK TO WIN FIRST TITLE SINCE 2008: A year after losing out on a state title to Skyline by five points, the Indians didn’t leave any doubt this time. They won by 30 points with 59 to claim their first state championship in 13 years. Angelie Scott paced them with a third-place finish in 19:19.2. McKinley Scott (7th) and Oakley Reid (14th) both also finished in the top-15. Pocatello (2nd), Skyline (3rd) and Twin Falls (4th) rounded out the rest of the placings.

Skyline sophomore Nelah Roberts is halfway to four state titles with another individual one in a time of 17:53.3

BLACKFOOT WINS FIRST STATE CHAMPIONSHIP IN IHSAA ERA: The Broncos rode to their first state title in the IHSAA era, which began in 2000, with four runners in the top-11, including individual champion Eli Gregory (15:43), with 44 points. Matt Thomas (3rd), Justin Whitehead (8th) and JT Morgan (11th) were the others. Preston was next with 57 points, while Twin Falls (111) and Pocatello (127) also saw the podium.