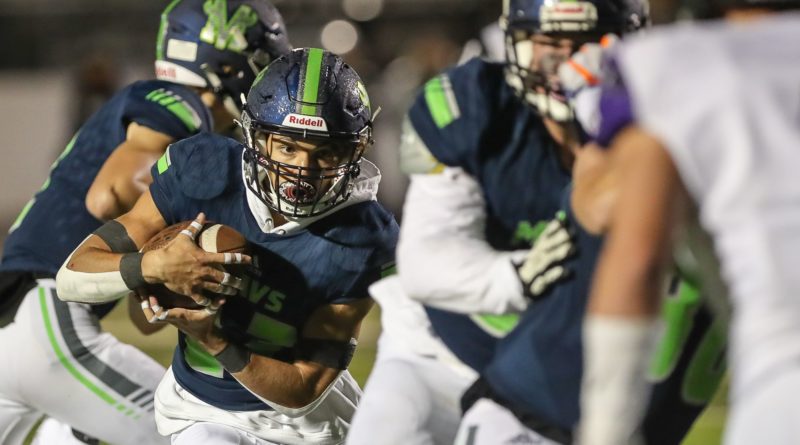 But the Mountain View High School football coach decided to bust them out considering the moment.

He pulled out the “Ted Lasso” dance after his team’s 26-6 win over Rocky Mountain in the 5A Southern Idaho Conference championship game Friday night at Idaho Central Credit Union Stadium.

While the No. 2 Mavericks (9-0 overall, 6-0 5A SIC) have won divisional titles in 2014, 2015 and 2017, the league didn’t have an overall conference championship during any of those time periods. So effectively, this was their first outright conference title in program history.

“They were like, ‘Coach, if we win, you have to do a dance,'” Benedick said. “I was like, ‘Alright, I can do that. I got some old school moves I can break out.’ So I had to follow through on my promise there.”

Senior running back Quintez Evans scored all three touchdowns and had 184 yards on 37 carries for Mountain View, which became the first team to beat No. 3 Rocky Mountain (7-2, 4-2) twice in a season in 12 years. It was the Grizzlies’ worst loss in two years, too. The reigning state champions also suffered their first double-digit league loss in five years, and scored their fewest amount of points in a game since 2017.

“It’s amazing because it’s history,” Evans said. “No team here has ever beaten Rocky Mountain twice in a season. So it’s amazing to see that we did that. We played together as a team, we stayed together, and that’s what happened.”

The Mavericks did so with their defense, which entered as the second-best in the state (11.1 points per game). They came away with four second-half turnovers that turned the tide of the game.

Junior linebacker Max Maile got it going by recovering a fumble around midfield – eventually leading to a 1-yard touchdown run by Evans to extend the lead to 14-6 with seven minutes, 24 seconds remaining in the third quarter.

Mountain View added three more points on a 29-yard field goal by senior kicker Mason Labra just a little more than a minute later. Sophomore Grayson Flatten set it up by recovering the ensuing kickoff after the Grizzlies misjudged it.

The Mavericks then came away with a fumble recovery after the Grizzlies decided to go for it on fourth and 1 at their own 41-yard line. The direct snap bounced off the hands of freshman running back Taeshaun Reese and into the ones of Mountain View junior linebacker Ivan Perkins.

Evans was stuffed on a fourth-and-goal run at the 1-yard line, but the Mavericks still took advantage. Rocky Mountain junior punter Dawson Anderson couldn’t handle a low snap and was promptly tackled in the endz one by senior defensive lineman Tyler Halford for a safety to increase the lead to 19-6 with 59 seconds remaining in the quarter.

“It was kind of like sharks to blood,” Benedick said. “There was a little blood in the water, and they started feeling it. “… Pretty soon, they’re playing better and they don’t think that anybody can get the best of them.”

The Mavericks put the game away for good in the fourth quarter. It started with an interception by junior defensive back Khye Ackley. When senior starting cornerback Alameen Abimbola went down with an injury, Ackley was his replacement. Three plays later, Ackley read the eyes of Rocky Mountain quarterback Tegan Sweaney perfectly. He stepped right in front of a pass intended for Jackson Mason for the pick, which set Mountain View up with first down at the Grizzlies’ 40.

“It was a big moment,” Ackley said. “Alameen got hurt, and I just wanted to do it for him and all the other injured kids on our team.”

Evans ran for his third and final touchdown on a 1-yard run a few moments later that padded the lead to 26-6 with 7:15 to go in the game. The Grizzlies got the ball one final time, but were forced to concede the game with a punt after Halford came flying off the edge for a sack on a third-and-14 play with 2:01 remaining. A few more runs by Evans, and the celebration was on.

Mountain View is off next week with a first-round bye. The Mavericks will then host the winner of Madison-Meridian in the 5A quarterfinals. They also get home-field advantage until the state championship if they make it that far.

Mason Jacobsen scored the lone touchdown on a 2-yard run in the second quarter for Rocky Mountain, which also gets a bye next week and will play the winner of Skyview-Highland.