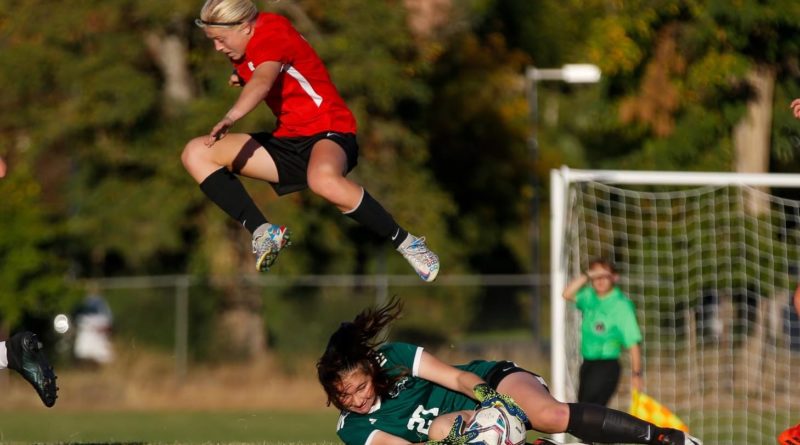 If the Boise High School sophomore wasn’t, would she have been invited to (and attended) the Under-17 (U17) U.S. Women’s National Soccer Team training camp?

But confining her to that simply isn’t doing her justice.

At 16, is she the most complete athlete in the state?

“She’s definitely in the conversation,” Boise High cross country and track coach Aaron Olswanger said. “From what we get to see day in and day out, she’s just an extraordinary athlete.”

Smith was in skis before she could walk, and was kicking a soccer ball around shortly after. She’s tried her hand at a little bit of everything over the years – swimming, hockey, lacrosse and even tackle football.

In fact, during that season of football for the North Junior High School team, she broke her arm making tackle. That didn’t stop her from finishing the season – or honoring her first U.S. Women’s National Soccer camp invitation, cast and all.

Eventually, Smith had to narrow her focus down to just four sports by the time she entered high school. She does both cross country and soccer in the fall, skiing in the winter and track and field in the spring, all while finding the time to maintain a 4.0 plus grade-point average.

“I am incredibly busy, probably more busy than any kid my age should be,” Smith said with a laugh. “But I love being busy. I wouldn’t want to have it any other way. It’s kind of what makes me happiest when I’m going around doing different things that I love.”

Smith ran in two Junior Olympics before joining the varsity cross country team last fall. She posted six of the seven best times in the state, including a mark of 17 minutes, 27.9 seconds at the Nike Cross Virtual Championship. Smith also won the individual Class 5A title by more than 32 seconds to help Boise, which was the No. 1 team in the nation at one point last season, win its third consecutive state title.

Later that spring in track, Smith won four state titles, including going undefeated in the 1,600- and 3,200-meter runs, and being part of state record-setting 4×800-meter relay with her older sister Logan, who is committed to Stanford for soccer. Sammy was the one who handed Logan the baton in the anchor leg.

The two of them are also teammates in soccer.

Smith looks like she might be a repeat winner in cross country this season, too. She has two wins, and her personal record time is almost seven seconds faster than it was last year.

“Oh, she’s already in the same conversation as Maggie Liebich (Princeton) and Eve Jensen (San Francisco),” Olswanger said about her potentially already being the best runner in program history. “She’s only a sophomore, and you hate to put these expectations and titles on them, but she’s definitely in the picture.”

When the cross country season is over, Smith and her family head to their house in Sun Valley where she begins her skiing season. She competes in both Nordic and mogul skiing. Smith has won junior national championships in both events.

Smith has been invited and participated at U.S. Development Team Elite Junior camps. According to Rick Kapala, the program director and head coach for the Sun Valley Ski Education Foundation, Smith is one of the two best U-18 nordic skiers in the country, and should make the U.S. Team at the World Junior Championships next winter.

“This isn’t about a kid who is freakishly physically gifted,” Kapala said. “I mean, obviously she is, but the biggest gift she has is the ability to apply herself over and over and over again without adding emotional burden or psychological pressure.”

It’s something that Smith is no stranger to, especially lately.

A member of the Boise Thorns club soccer team where she’s played up against girls three years her elder since the age of 6, Smith just returned from U17 training camp in Chula Vista, California. It was her third national camp invite since 2019, and she was one of only 36 players nationwide invited, and the first from the Gem State to attend since Boise High alum Grace Hancock, who played at Washington State University, did back in 2013.

The camp, which ran from Oct. 10-17, will help determine the 20-player roster for the 2022 FIFA Youth Women’s World Cup in India next August.

“I think it was super beneficial just to be in an environment where I was training with some of the best players in the country,” Smith said. “I definitely learned a lot and was able to kind of watch some phenomenal players and see how they played and see if there are ways in which I could implement the stuff they were doing into my own game. It was also really beneficial to be coached by such a highly regarded staff, because I think they have a lot to offer and I’m eager to learn. So overall, it was a phenomenal experience and I was super lucky that I was able to go.”

The U.S. Women’s National Soccer Team will hold two more camps before making a final decision. If Smith were to move on in the process, she would receive another camp invite next month – with the final one coming in January.

No soccer player from Idaho has ever officially made an U.S. National Soccer Team. Centennial grad Sofia Huerta, who currently plays for the NWSL’s OL Reign, came the closest. She was on the provisional roster for the 2018 CONCACAF Women’s Championship, but didn’t make the final cut.

But Smith isn’t thinking about any of that right now – at least this week.

She’s just focused on trying to deliver Boise its first state championship since 2013, especially since she missed districts last week for the training camp.

Smith, who has 14 goals and 12 assists this season despite constant double and triple teams, returned Thursday in style by scoring what proved to be the deciding goal in the 32nd minute in a 2-1 win over Eagle during the opening round of the state tournament.

“That’s just the type of kid that she is. She’s very respectful and understanding and doesn’t want to assume anything or take advantage,” Boise High girls soccer coach Nicole Arsenault said. “The humble is the first part that you see out of her in terms of your personal interaction with her.”

The Brave (15-3-1)  will play at 3 p.m. Friday in the semifinals against Rocky Mountain, which has beaten them in the title game the last three years.

So that should keep her busy.

“You could write a book about her,” Kapala said. “It’s Sammy’s world, and we’re just enjoying the view.”