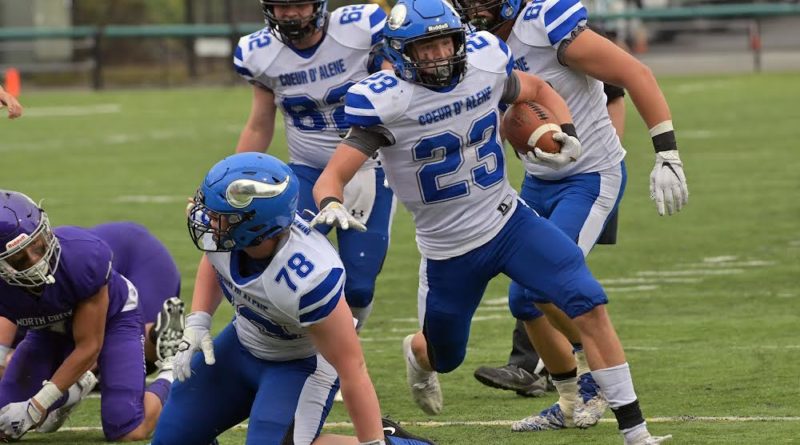 Here is an inside look at the top high school football games across the state of Idaho during the ninth full weekend of 2021:

Game nugget: This is for the 5A Southern Idaho Conference championship.

About the Grizzlies: The Grizzlies have been waiting for this since Sept. 3 when Mountain View snapped their 29-game 5A SIC winning streak that went back nearly four years. Rocky Mountain has rattled off six consecutive wins – six by double figures – to make it to the league title game in back-to-back seasons. QB Tegan Sweaney (1,641 yards, 19 TDs, four INTs) and RB Art Williams (531 yards, eight TDs) have been pivotal during that stretch.

About the Mavericks: Mountain View has the axe and now it wants the league title, too. It would be the first since 2017 when the Mavericks won their pod. They’re the only 5A team with a top-two offense (38.9 points per game) and defense (11.1 ppg), which they’ll need against the three-time defending league champs, who haven’t been beaten by the same team in a season since 2009. QB Dawson Wahl (1,430 yards, 16 TDs, INT) and RB Quintez Evans (835 yards, 12 TDs) will look to do just that.

Game nugget: Vikings have won the last four meetings by an average of 32.7 points.

About the Bengals: The Bengals are the only team in the 5A Inland Empire League that controls their own destiny. A win and they’re the conference champs. But Lewiston has every matchup over the past 12 seasons by double figures to Coeur d’Alene. But the Bengals do have the best offense in the 5A ranks (45.3 ppg), thanks to QB Jace McKarcher (2,180 total yards, 28 TDs) and the 5A’s leading rusher in RB Cruz Hepburn (1,171 yards, 18 TDs).

About the Vikings: On the other hand, Shawn Amos’ group needs a win in order to guarantee itself a shot at the playoffs, which is odd for a program that has reached the state semifinals in each of the past four seasons. A Coeur d’Alene victory, along with a Post Falls win, would create a three-way tie (decided by Kansas tiebreaker at a later date). QB Brayden Bengston, RB Gunner Giulio and company will look to create that chaos.

Game nugget: 4A Great Basin Conference title is on the line.

About the Bruins: The Bruins might be the most underrated team in the 4A classification. Their only blemish was a seven-point loss to Pocatello, which would be the No. 1 overall seed if the state playoffs started today. Twin Falls has won its last six games by an average of nearly 34 points since. The Bruins like to keep the ball on the ground with James Noorlander and Wyatt Solosabal, who have combined for 1,052 yards and 16 touchdowns.

About the Spartans: It’s odd to say that the No. 1 overall team in the classification needs to prove it, but that almost feels like the case with the Spartans. The way the season has played out, none of their wins have come against teams with winning records. Minico’s opponents are a combined 18-45. But the Spartans have that opportunity now. Jafeth Bendele (782 yards, nine TDs) and Joseph Terry (341 yards, three TDs) lead a stable of quality running backs.

Game nugget: Winner is the 2A Nuclear Conference champion.

About the Cougars: The Cougars very well could have been the No. 1 team in the state. Their only hiccup was an overtime loss to No. 1 West Side, which has the state’s longest winning streak at 29 games – a game they were in position to win (Firth gave up a 33-yard run with no time remaining). But the Cougars would settle for ending the Huskies’ three-year reign atop the Nuclear Conference. RB Sam Park is closing in on 1,000 yards and QB Gage Vasquez has 11 touchdown passes.

About the Huskies: In the midst of all of this West Side and Firth talk, North Fremont has kind of gotten lost in the fold. It shouldn’t as all it’s done is go unbeaten and win the past six games by an average of almost 33 points. The Huskies have also won the last three regular season matchups against the Cougars by double digits. And North Fremont is out for revenge after a 7-6 loss to Firth in the 2020 state semifinals. Jordan Lenz and AJ Hill anchor a dynamic backfield.

Game nugget: 1A D1 Snake River Conference title is up for grabs.

About the Hornets: The defending state champions have looked the part all year. No team has gotten closer than 20 points. And that was the first game of the season. Since then, the Hornets have outscored their opponents 344-12. Having one of the state’s highest scoring offenses (57 points per game) has contributed to that with QB Payton Beck and WR Dace Jones making the offense go.

About the Trojans: Raft River was the last team to beat Oakley on Oct. 23, 2020, which handed the Trojans the league title. But the Hornets took the state title at Raft River’s expense via a 52-22 beatdown in the state championship game. So now it’s the Trojans’ turn for payback. Like Oakley, they’ve rolled through their schedule with an average margin of victory of 39.3 ppg. RuB/LB Thaine Loughmiller does everything for them.