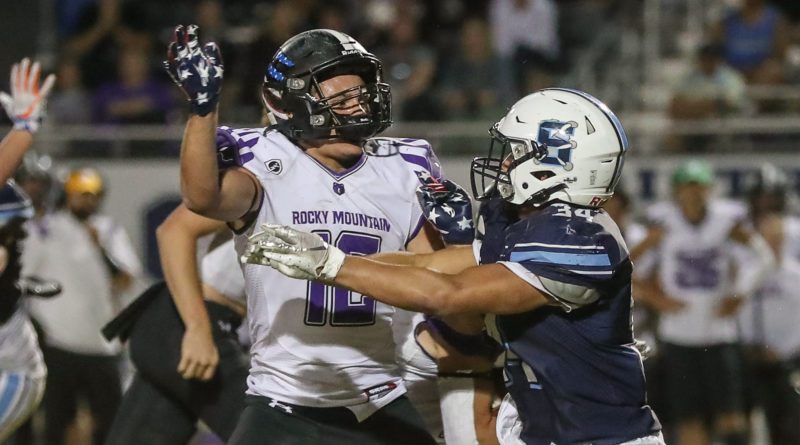 This week: Travels to Madison on Friday night.

Down four key players, the Trojans still made the Rams look like anything but the No. 5 overall team in the state with almost 400 yards on the ground, led by Zheik Falevai’s 180 rushing yards and four scores.

This week: Hosts No. 3 Rocky Mountain in the 5A SIC championship game Friday night.

Dawson Wahl went 21-of-27 for 248 yards and five touchdowns as the Mavericks finished the regular season unbeaten to set the stage for another showdown against Rocky Mountain with the 5A Southern Idaho Conference title on the line.

This week: Travels to No. 2 Mountain View in the 5A SIC championship game.

Art Williams gashed the Warriors for 142 yards as the Grizzlies held off a late rally to earn a spot in the 5A SIC title game in back-to-back season. Now, they will look for payback against Mountain View, which snapped their 29-game league winning streak.

The Mustangs rode up the rankings with their fourth consecutive win – and first shutout of the season, with four different players scoring on the ground, including Roy Hull going for 110 yards and a touchdown on eight carries.

The Rams suffered their worst loss in five years with three turnovers and just 243 yards of total offense, but with chaos below, still managed to keep their spot in the top-5 – for now.

The Vikings gave up a 61-yard pass in the closing minute, which allowed the Trojans to beat them for the first time in six years and put their hopes of a fifth 5A Inland Empire League title in a row in jeopardy.

Meridian couldn’t end a decade-long losing streak to the Grizzlies, and have now lost three games by a combined five points to three of the top four teams in the state. Translation – one of the best teams in 5A.

This week: Travels to Fruitland on Friday night.

The Trojans did what no one had yet to do – stop Brett Spencer, who has a NCAA Division I offer from the University of Idaho – to win their 19th consecutive conference game, and fourth league title in a row.

This week: Travels to Malad on Friday night.

The Pirates posted their third shutout of the season with a 29th win in a row – the longest in the state – and are now just one win away from their fourth consecutive 2A South East Idaho Conference title, and second unbeaten regular season in a row.