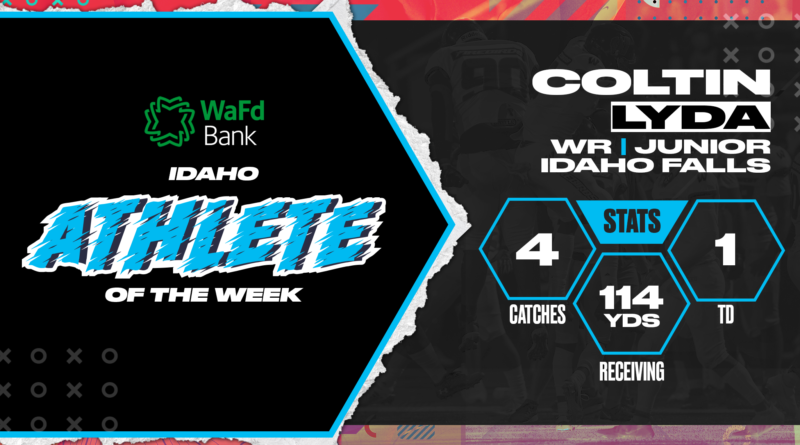 The junior notched four catches for 114 yards and a 40-yard TD that kickstarted a 17-point rally in the fourth quarter in a 38-34 win over Skyline in the Emotion Bowl.

Lyda ran away with this week’s honor, receiving 63.14% of the total vote. There were over 41,000 votes tallied this week!

Kross Antonnacchi, Meridian RB: Rumbled for 164 yards and two scores in a 48-7 win over Boise.

Jacob Carney, Centennial CB: Carney scored not one, but two defensive TDs, including a 99-yard fumble return in a 35-25 win over Kuna.

Daniel Carrillo, Nampa RB: Rushed for 166 yards and a pair of TDs in a 55-20 win over crosstown-rival Columbia.

John Cornish, Lakeland RB: Finished with 141 rushing yards and three TDs, all in the first half in a team’s 59-0 rout over Moscow.

Quintez Evans, Mountain View RB: Racked up 169 rushing yards and a pair of TDs on 33 carries in a 24-6 win over Capital.

Brody Hasselstrom, Prairie RB: Had 191 yards of total offense, including 151 on the ground, and four TDs in a 58-26 win over Lapwai.

Cruz Hepburn, Lewiston RB: Recorded 242 yards of total offense and all four of the Bengals’ TDs, including the game winner in the final minute of a 30-29 win over Post Falls.

Hayden Kincheloe, Homedale RB: The Trojans’ rushing attack was nearly all Kincheloe with him having 343 of the 399 yards and four TDs in a 48-0 blanking of Payette.

Seth Knothe, Bishop Kelly RB: The 4A classification’s leading rusher continued to add to his total with 169 yards and two TDs in a 55-6 win over Caldwell.

Ty Koepp, Kendrick QB: Passed for 275 yards and four TDs, while adding a 20-yard score on the ground in a 54-0 rout over Timberline.

Jordan Lenz, North Fremont QB: Galloped for 278 rushing yards and three TDs, including a 90-yard run, in a 44-18 win over Aberdeen.

Thaine Loughmiller, Raft River RB: Did it on both sides of the ball with 127 rushing yards and two TDs on offense, and 12 tackles, two fumble recoveries and one sack on defense in 50-0 win over Murtaugh.

Colston Loveland, Gooding TE: Michigan commit hauled in six catches for 173 yards and three TDs, while also running for a 38-yard score in a 58-0 win over Filer.

Ashton Madsen, Preston DB: Madsen came away with five turnovers just by himself, including three interceptions, one of which he returned 27 yards to the house in a 32-0 shutout over Century.

Jrew Plocher, Watersprings QB: Had a big night in all phases with 460 all-purpose yards and four TDs in a 62-24 loss to North Gem.

Sierra Grizzle, Mountain View volleyball: Grizzle had 14 kills, 7 digs and 5 aces in a 3-0 win over Capital on Oct. 5.

Brett Spencer, Weiser QB/S: Spencer had 4 tackles and an interception on defense and went 16-of-22 passing for 310 yards and 4 touchdowns in Weiser’s 52-0 win over McCall.

Brock Spencer, Weiser WR/DB: Spencer had four tackles and an interception on defense and six receptions for 150 yards and two touchdowns on offense in Weiser’s win over McCall.