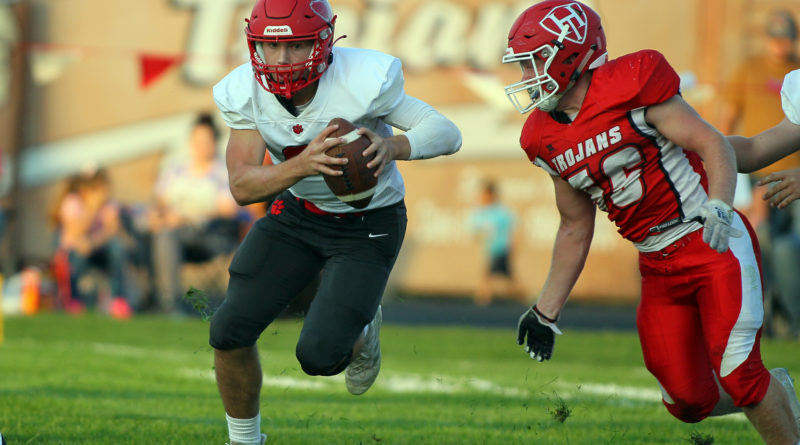 The eighth week of the fall 2021 Idaho high school football season was filled with big-time performances.

Here’s a quick look at some of the top stars and best individual performances from the Week 8 slate of games across the “Gem State.”

TJ Hibbard, Prairie RB: Hibbard racked up 213 yards and three touchdowns on just 11 carries in an 84-50 win over Genesee to wrap up the Whitepine League Division I league title.

Parker Pettit, Sandpoint QB: Pettit totaled four touchdowns himself, including three in the fourth quarter, and nearly 200 yards of offense in a 41-6 win over Moscow.

Parker Brown, Timberline (Weippe) QB: Brown put up eight touchdowns and nearly 500 yards of total offense himself, with 391 of that coming through the air in a 78-66 shootout win over Lewis County.

James Billingsley, Timberlake RB: Billingsley ran for 155 yards and a pair of touchdowns on 21 carries in a 27-14 win over No. 6 Kellogg.

Zheik Falevai, Rigby RB: Falevai flirted with the 200-yard mark with 180 yards and four touchdowns, including three in the fourth quarter, to help the No. 1 Trojans run over No. 5 Highland 44-21.

Cage Brokens, West Side RB: Brokens bagged four touchdown runs, including a 66-yarder, and had most of the team’s 400 yards on the ground in a 53-0 rout of Aberdeen.

Matt Christensen, Pocatello WR: Christensen had 118 yards with a touchdown, and then turned right around for two interceptions on defense in a 17-14 win over No. 7 Preston.

Parker Rushton, Borah RB: Rushton carried the Lions to their fifth straight win – literally – with 40 carries for 183 yards and a touchdown in a 24-19 victory over Capital.

Art Williams, Rocky Mountain RB: Williams galloped for 142 yards and two scores on 20 carries to help the Grizzlies earn a spot in the 5A SIC Championship game in a 24-21 win over No. 7 Meridian.

Dawson Wahl, Mountain View QB: Wahl completed 21-of-27 passes for 248 yards and five touchdowns as the Mavericks remained perfect on the season with a 48-8 win over Kuna.

Atonio Fifita, Skyview RB: Fifita piled up 212 yards and a touchdown on 36 carries in a 38-31 loss to Timberline.

Trais Higgins, Nampa WR: Higgins hauled in 12 catches for 200 yards and a touchdown in a 52-50 win over Middleton.

Seth Knothe, Bishop Kelly RB: Knothe firmly maintained his status as the 4A classification’s leading rusher with 220 yards and two touchdowns on 23 carries in a 35-20 win over Vallivue.

Landon Cheney, Nampa Christian QB: Cheney threw for 244 yards and five touchdowns as the Trojans moved within one win of the 2A WIC title by doubling up No. 4 Melba 40-20.

Carter Woodland, Notus RB: Woodland put up four touchdowns and 411 yards of total offense, with 236 of that coming on the ground in a 62-22 win over Rimrock.

Colten Meyer, Horseshoe Bend QB: Meyer amassed eight touchdowns and 345 yards of total offense, including 165 yards and three scores on the ground in a 72-20 win over Garden Valley.

Connor Simpson, Carey RB: Simpson compiled 231 yards and five touchdowns on just 17 carries in a 32-22 win over No. 4 Castleford.