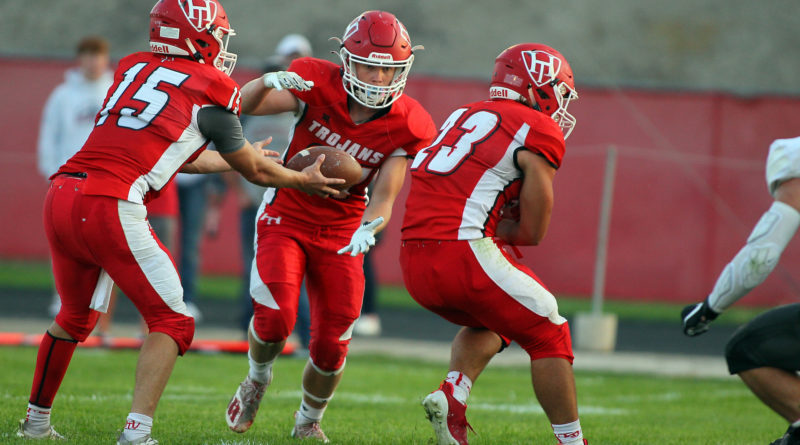 HOMEDALE – Seniors Hayden Kincheloe and Brett Spencer chatted and took a picture at midfield together before saying goodbye following a hard-fought battle between both of their highly-ranked and championship-contending respective teams.

Kincheloe left with bragging rights over his longtime friend and rival after the No. 1 Trojans’ 14-6 win over the third-ranked Wolverines on Friday night at Deward Bell Stadium.

“We’ve been going at it since seventh grade,” Kincheloe said. “Big rivalry. We actually beat them in the seventh grade championship, 12-6, so very similar score. I’ve known Brett for a long time. I love the kid, but I don’t like him when we’re on the field because he’s a crazy athlete. He’s the best athlete in the state of Idaho.”

Homedale (8-0 overall, 4-0 3A SRV) held Spencer, who has an NCAA Division I offer to play quarterback from the University of Idaho, to less than 100 yards passing and rushing. He went 11-of-19 for 95 yards and a score, while running for another 94.

It was well below his average with Weiser (7-1, 3-1) coming into the highly-anticipated 3A Snake River Valley Conference showdown averaging 45.1 points per game. The Wolverines hadn’t scored fewer than 34 points in a game this season. The six points, which didn’t even come until the fourth quarter, were the fewest in a game by them in four years.

“I think that was goal No. 1, 3 and 5,” Homedale coach Matt Holtry said about containing Spencer. “Stop No. 2. He’s a heck of a player. You gotta tip your hat to him, he made big plays here, made some big runs, and you have to expect that when you have that kind of caliber athlete out there.”

Spencer gave Weiser life after managing to get off a wobbly throw while getting drilled by Homedale junior defensive end Rylan Binford. The pass found its way to younger brother – sophomore running back Brock Spencer, who made a remarkable diving catch for the 22-yard touchdown that cut the deficit down to 14-6 with 11 minutes, 30 seconds remaining.

The Trojans tried to prevent Brett Spencer from touching the ball again on their ensuing drive. They did manage to burn 8:08 off the clock, but a turnover on downs at the Weiser 27-yard line gave Spencer the ball back with 3:13 to go.

A couple of quick passes and some runs by Spencer allowed the Wolverines to get past midfield. But that’s where the Homedale defense stiffened. On third and short, Spencer just slipped out of the grasp of Homedale senior linebacker Willy Haun. But Haun popped right back up and caught back up to Spencer after he stopped to look to throw for a sack and an apparent fumble. However, officials ruled Spencer down. But it still set up a fourth-and-17 at the Weiser 43.

Spencer lined up in the shotgun before a bad snap forced senior running back Willy Shirts to pick the ball up and pitch it back to him. But by that time, Haun was already flying off the edge and right into Spencer’s face. So Spencer had no choice but to just heave it up and hope for the best. The throw went straight up in the air and bounced right off the ground for a turnover on downs with less than a minute to go to preserve the Trojans’ win.

“We know defense wins championships, that’s for sure,” said Haun, who finished with seven tackles and two sacks. “We’re just here to protect our offense. We do our job, they do their job, it’s a win-win on both sides and we know we can do that together.”

Homedale jumped out to a 14-0 lead. But it didn’t score the game’s first point until there was 2:38 remaining in the first half. Junior quarterback Jaxon Dines ran the ball in from 10 yards out. The score was set up by a 31-yard wideout pass from senior Eli Heck to senior John Brown.

The Trojans then scored on their opening drive of the second half after forcing Weiser to a quick three-and-out. Kincheloe doubled up their lead on a 9-yard run with 4:02 to go in the third quarter to cap an 11-play, 65-yard drive that spanned almost six minutes.

“That was a big momentum change,” Kincheloe said. “No one really had momentum and then us establishing that touchdown set the tempo. They came back and scored, but without that touchdown, we don’t win the game.”

Kincheloe and Dines combined for 227 yards on the ground. Dines recorded a game-high 136 yards, while Kincheloe nearly cracked the century mark himself with 91 for the Trojans, who won their 17th conference game in row and 28th straight at home.

And with Fruitland losing on Friday, the Trojans won the 3A Snake River Valley title – for a fourth consecutive year.