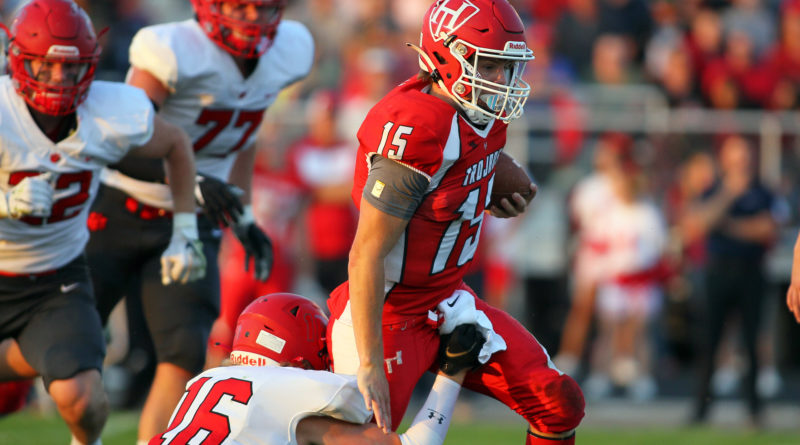 Here is an inside look at the top high school football games across the state of Idaho during the eighth full weekend of 2021:

Game nugget: The 5A High Country Conference title is on the line.

About the Rams: Highland has rode its fourth-ranked defense (12.3 points per game) to six consecutive double-digit wins. But its vaunted defense will be tested against the state’s second-best offense (41.2 ppg), which has a NCAA Division I quarterback to contend with in Tiger Adolpho (Weber State). So the Rams’ offense, which is ranked seventh (34.7 ppg) will need to do their part, too, especially QB Jack Whitmer (1,722 yards, 12 TDs).

About the Trojans: There’s a lot of uncertainty facing the Trojans this week. They’re already going to be down one player in all-state preseason LB Logan Fredrickson, who is out two weeks minimum with a knee injury. WR Taylor Freeman (ankle) and CBs Ryder Thompson (hip) and Zxaeb Falevai (hand) are all questionable. But Rigby is still a dangerous team with Adolpho (1,618 yards, 17 TDs, four INT) and RB Zheik Falevai (524 yards, 10 TDs).

Game nugget: The Grizzlies have won the past nine meetings.

About the Warriors: Meridian is two points away from being undefeated with losses to No. 2 Mountain View (14-13) and No. 6 Eagle (24-23) – games in which it led in the fourth quarter, too. QB Malakai Martinez finally seems fully healthy after missing most of the year with a shoulder injury. He threw three touchdowns against Boise last week. And RB Kross Antonnacchi (775 rushing yards, 11 TDs) is in contention for the league rushing title.

About the Grizzlies: The Grizzlies can clinch the 5A Southern Idaho Conference Foothills Division title with a victory. A win would also put them in the conference championship game in back-to-back seasons – and a rematch with No. 2 Mountain View would await them. But Rocky Mountain has to take care of a Meridian team, which is out to prove something, first. QB Tegan Sweaney (1,430 passing yards, 17 TDs) has really come on strong.

Game nugget: The winner is in the driver’s seat for the 3A Snake River Valley crown.

About the Wolverines: This is Weiser’s second 7-0 start in three years. But the last time the Wolverines began a season like that, Homedale ran them off the field, 34-14, the very next game. As a matter of fact, Weiser hasn’t beaten the Trojans in a decade. Reigning co-league MVP Brett Spencer (QB/DB) will look to change all that. Spencer, who has an offer from the University of Idaho, can light teams up with his arm and legs.

About the Trojans: Homedale has had a stranglehold on the league for the past three years now – and 16 games in a row in the 3A Snake River Valley. Also, the Trojans just don’t lose at home, winners of 27 consecutive games dating back to the 2016 season.. QB Jaxon Dines (1,365 total yards, 19 TDs) and RB Hayden Kincheloe (1,088 rushing yards, 15 TDs in five games) will look to help preserve those streaks.

About the Mustangs: The Mustangs were dismissed a bit following their 0-2 start, even though those losses were to 3A’s No. 5 Fruitland and No. 3 North Fremont. And people are still kind of looking past them even after a 44-21 win over Cole Valley Christian. But this is the game where Melba can show this is still its conference. The Mustangs are putting up 43 points per game, thanks to their three-headed rushing attack of Trace Stimpson, Gabe Shaffer and Kaden Dayley.

About the Trojans: The Trojans showed they were for real with a 28-20 win over Delco, which just made it to the state semifinals last year and has four state championships to its name. And with five consecutive wins themselves, they enter with a ton of confidence.against a team they haven’t beaten in four years. QB Landon Cheney (1,460 passing yards, 18 TDs) doesn’t get his due, and RB Dane Bradshaw (921 yards, 12 TDs) should eclipse the 1,000-yard rushing mark.

About the Wolves: The Wolves doubled up reigning state champion Dietrich earlier this season. Can they now knock off the defending runners-up in the same season? Castleford definitely has a shot – behind an offense that has put up points (49.0 ppg). QB Eric Taylor and RB Gus Wiggins are the one setting the pace. A win Friday would give the school its best season since 2012.

About the Panthers: The gold standard of this classification, Carey has been to four consecutive state championship games, winning twice. And there is no reason to believe the Panthers won’t be back there in November. They are the highest-scoring team in the state at 58.6 points per game. RB Connor Simpson is the Panthers’ playmaker, but keep an eye out for QB Chase Bennion.