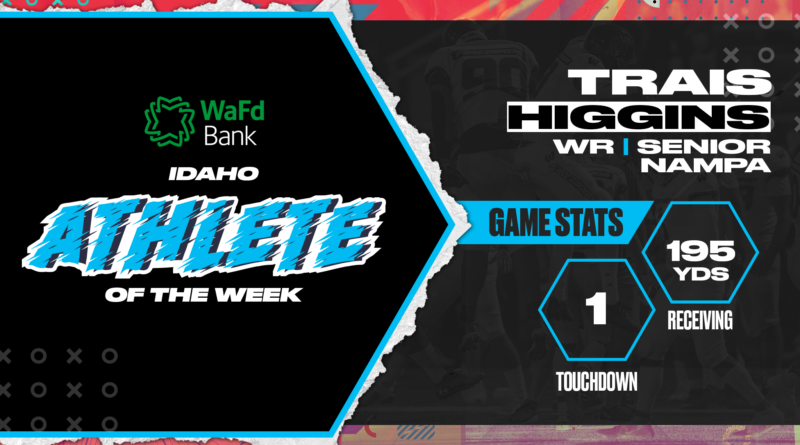 The senior racked up 195 receiving yards and a TD, which was a 6-yard catch with 16 seconds remaining, in a 39-38 come-from-behind win over Vallivue.

Higgins ran away with this week’s honor, receiving 76.68% of the total vote.

Cesar Aburto, Murtaugh RB: Reached the 200-yard rushing mark for Red Devils to go with two scores in a 74-52 win over Lighthouse Christian.

Gatlin Bair, Kimberly WR: Speedster caught nine passes for 149 yards and three scores, while also taking a 75-yard punt return to the house in a 48-6 win over FIler.

Junior Benties, Murtaugh RB: Nearly eclipsed the 300-yard rushing mark with 280 yards and four scores, while also finishing with 61 receiving yards and a TDn in a 74-52 win over Lighthouse Christian.

Dane Bradshaw, Nampa Christian RB: Rushed for 214 yards and two scores on just 14 carries in a 43-16 win over New Plymouth.

Mason Brown, Lapwai RB: Chalked up 178 yards and three scores, including a 99-yard run, on just nine carries in a 44-22 win over Clearwater Valley.

Max Clark, Capital QB: Threw for 348 yards and accounted for six TDs, including four scores through the air as the Eagles beat the Brave for the 32nd straight time in a 50-28 win.

Gerrit Cox, Sandpoint RB: Rumbled his way for 171 yards and two scores, while grabbing a 33-yard TD catch in a 28-13 win over Lake City.

Ian Duarte, Eagle WR: Hauled in seven catches for 94 yards and a TD, while also taking a 73-yard punt return to the house in a 32-10 win over Timberline.

Bridger Hatch, North Gem QB: Rushed for 230 yards and six TDs on only 10 carries in a 54-0 shutout over Challis.

Seth Knothe, Bishop Kelly RB: Toted the ball an astonishing 42 times for 315 yards and five TDs for his best performance of the season in a 51-42 win over Middleton.

Jace McKarcher, Lewiston QB: Passed for 225 yards and two TDs, while running for another 88 yards and three scores in a 48-13 win over Moscow.

Jaden Pitcher, Grace RB: Put up 211 yards of total offense and five TDs, with 115 yards and four scores coming on the ground in a 53-36 win over Rockland.

Parker Rushton, Borah RB: Came within 18 yards of a third consecutive 200-yard rushing performance, and had two TDs, including the game winner in a 27-24 victory over Kuna.

Tegan Sweeney, Rocky Mountain QB: Passed for 254 yards and four scores, while also returning a fumble for a TD on defense in a 51-14 win over Owyhee.

Caden Taggert, Skyline RB/WR: Totaled 100 yards rushing and receiving, while also hauling in a score in a 28-14 win over Madison.

Tyson Tucker, Potlatch QB: Ran for 194 yards and four TDs, while also throwing for another 94 yards and a score in 60-0 shellacking of Logos.

Carter Woodland, Notus RB: Did it all for the Pirates with 212 yards and four TDs, while also making 10 tackles and even forcing a fumble in a 60-14 win over Idaho City.

Titus Yearout, Lapwai QB: No incompletions as he went a perfect 8-for-8 for 187 yards and two TDs, while running for another 138 and two scores in a 44-22 win over Clearwater Valley.