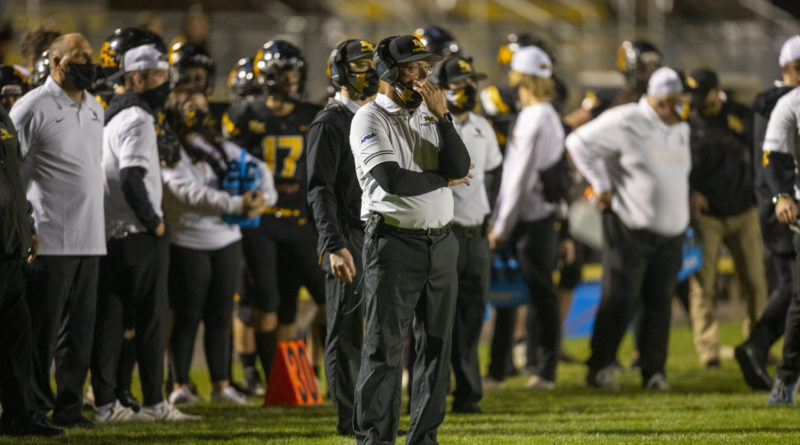 Tim Brennan’s resume through his 26 seasons as the football coach at Bishop Kelly High School in Boise speaks for itself.

He’s a six-time state champion with 227 victories (and counting) – with a winning percentage north of 74%.

But his latest contribution to the game has nothing to do with him being on the sidelines, but rather behind a desk.

Brennan recently just filed paperwork to create the first-ever football coaches association in the state. The Idaho State High School Football Coaches Association, as it will be known, expects to be up and running after Christmas.

“I can’t wait, and I think it’s one of those things that even five years from now, we’re gonna look back and wonder what we ever did without it,” said West Side coach Tyson Moser, who has wanted an association since he first started with the program more than 20 years ago.

“It’s one of those things that we’re gonna look back and go, ‘How did we function without an association? What were we doing in the past?’ It’s one of those pioneer things where you’re setting something up that’s going to benefit coaches for decades to come.”

Moser is not the only football coach excited about it. He said that everyone he’s spoken with is fully on board for one. And Brennan said he’s heard nothing but positivity in the hundreds of email exchanges he’s sent throughout the years to get this thing going.

Brennan has had the idea for quite some time. It initially spawned while serving on national committees, such as the American Football Coaches Association and USA Football.

But with Brennan admitting to being in the twilight of his coaching career, he decided now was the time to finally get one up and running in the Gem State. He visited with coaches from states such as Oklahoma and Texas, whom he had met while attending those national conventions, and asked them how their own state football associations worked before making his own one official with the filing of a 501(c)(6) for a non-profit organization last month.

“It’s one of the things I wanted to try to get done before I hung it up,” Brennan said. “I wanted to make sure to get something going and organize our football coaches a little bit better to work together on stuff.”

He plans on having a president, vice president, secretary, board members and a constitution about how each one will be selected, and the length of their respective terms. The president of the Idaho State Coaches Association has a two-year term.

It’s been rumored that Brennan might end up being the first president.

“Tim’s done all the work. Tim needs to be the president,” Moser said. “I don’t know if he wants to do that or not, but he needs to be the first up for sure. As coaches, we get so caught up in our season, in our sport, in our own school and it’s hard for us to see the bigger picture. But he’s a guy that cares about the entire state, not just at Bishop Kelly.”

“Nobody’s really said anything to me,” added Brennan with a laugh.

Regardless of who it is, there will be equal representation from all districts and classifications with the goal of getting every school in the state to join.

In order to become a member, schools must pay a yet-to-be-determined fee. But Brennan said accommodations will be made to the smaller schools who don’t have as many resources as the bigger programs. So a 5A Timberline, which is the state’s largest school, would pay more than 2A’s Firth. And once the school pays the fees, all of the football coaches from that program will become members.

“I’m coming from a small school and I think sometimes the smaller schools feel like we kind of get forgotten, left out, and don’t really matter. But Tim wants to include us as much as he wants to include anybody,” Moser said. “He’s as worried and concerned about getting us on board as he is the 5As and 4As. He wants to protect the sport and do what’s best for it.”

Brennan said the money will be used for things such as putting on coaches clinics, setting up statewide meetings for topics to discuss, selecting their own all-state teams and sending fellow coaches to some of the same national conventions he’s gotten to attend.

“Not many coaches in Idaho go to those national conventions, and part of it is because of the resources,” Brennan said. “It would be great to inform our own coaches about what they’re doing in places like Illinois and how they’re dealing with similar issues.”

Issues such as dealing with a seeded state tournament. Moser said that having a state football coaches association would have helped them get rid of the pre-determined state brackets sooner. The Idaho High School Activities Association only switched over to a seeded tournament with RPI and now MaxPreps rankings only a few years ago.

But now coaches will be able to bring up their concerns directly to bodies such as the IHSAA – as one unified body.

“It’s not just about having a voice with the state, but that we get to know each other and support each other,” Brennan said. “If you’re not playing them on Friday night, you might as well help them out any other time.”