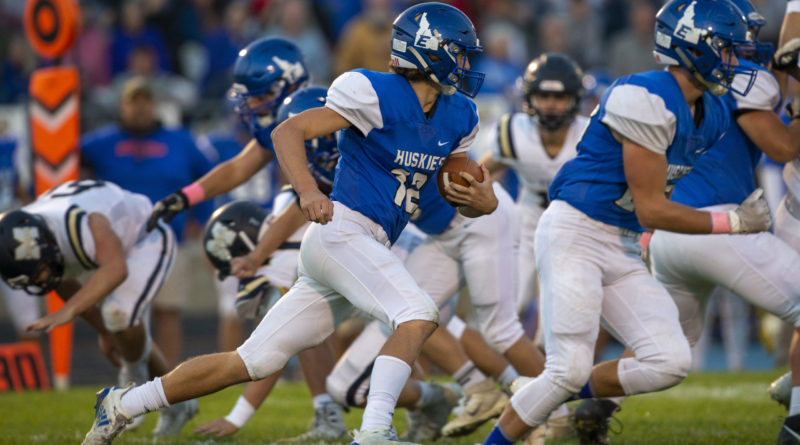 MIDDLETON – When Rich Hargitt left his team’s locker room, he immediately sat down on the curve.

The Emmett High School football coach needed a moment to fully process this one – as did the rest of the shocked spectators in attendance.

The No. 2 Huskies scored 14 points in the final 65 seconds to pull off an unbelievable 42-41 win over sixth-ranked Middleton on Friday night – when all the Vikings had to do was kneel out the clock.

“I needed a couple minutes,” Hargitt said. “I tell the kids all the time, ‘We’re all mortal, we’re all gonna die someday, but the memories you make in this life are invaluable.’’ They are an amazing, amazing thing that you get to hold onto for a long time, and I don’t think I’ll ever forget the end of that one.”

Huskies senior quarterback Caden Young connected with senior wideout Caseyn Pearson for a seemingly meaningless 16-yard touchdown pass in the corner of the end zone with 1:05 remaining in the game.

The late score cut Middleton’s lead down to 41-35. Emmett had no timeouts. And the Vikings recovered the pooch onside kick. All they had to do was run out the clock.

But something else came into play – the 4A SIC three-way tiebreaker.

For Middleton to take over the No. 1 seed it had to beat the Huskies by at least 13 points Friday night – something that was firmly in the mind of Vikings coach Bill Brock, who decided to have his offense try and score more points rather than take a kneel down.

The gutsy call backfired when Vikings senior quarterback Ky McClure coughed up the football on a scramble, and Emmett senior linebacker Chase Warner jumped on it. The fumble recovery gave the Huskies the ball back at the Middleton 20-yard line with 26 seconds to go.

“I just feel bad,” Brock said. “I shouldn’t have been so greedy. It doesn’t matter how I rationalize it. It was a stupid decision on my part and one that cost us the game.”

Young completed a 7-yard pass to sophomore wideout Caiden Hinsz near the sideline before scrambling out of bounds for a 7-yard run. The plays set up a first-and-goal at the 6-yard line with just four seconds to go.

“I told our coaches on the headset, ‘There’s no debate. Caden Young will not give this ball up,'” Hargitt said. “He’s going to put it across the paint and he’s going to end it himself.’”

That’s exactly what Young did, too.

He took the shotgun snap, ran to the left, cut towardsthe middle of the field and barreled his way through four Viking defenders to tie the game at 41-41 with no time left on the clock.

“That’s definitely one of the craziest games I’ve been a part of,” Young said. “I’ve never scored a buzzer-beater touchdown, so I can add that to my resume, which is pretty cool.”

Young then turned right back around for his placeholder duties. He fielded the snap cleanly, got it down with laces in for senior kicker Jorge Rivera, who drilled the game-winning PAT for the improbable come-from-behind win.

“These kids are gonna be sitting around boring the living daylights out of their grandkids some day telling them the day they pulled off a 13-point deficit in the last minute and a half or whatever it was,” Hargitt said. “Thank god I got to be a part of that.”

The win puts No. 2 Emmett (6-1 overall, 5-0 4A SIC) in prime position for their second consecutive league title. The Huskies just have to win one of their final two games to secure another conference crown. They host Columbia (2-5, 2-3) next week before closing out the regular season at home against Vallivue (4-3, 3-2).

“I don’t think anybody but us believed in us,””Young said. “We’re still gonna work hard. We still have two games to win if we want to be conference champs for sure. So that’s what we’re going to do. We’re going to go out there, hit them hard and finish out as strong as we can and see what the playoffs have in store for us.”

Young combined for 338 yards of total offense and had a hand in all six of the Huskies’ touchdowns. He ran for a game-high 257 yards and five touchdowns including an 81-yarder on the first play of the second half that tied the game at 21-21.

“He’s the best football player in the state of Idaho, and it’s hands down,” Hargitt said. “I’ve tried to tell people. Some people believe it. Some people don’t. But hopefully they saw it.”

McClure also totaled more than 300 yards of offense himself. He passed for 243 yards and three scores, while running for another 81 and two touchdowns. Tate Johansen hauled in nine catches for 100 yards and a touchdown for the No. 6 Vikings (4-3, 3-2), who will visit Nampa (3-4, 3-2) next Friday.