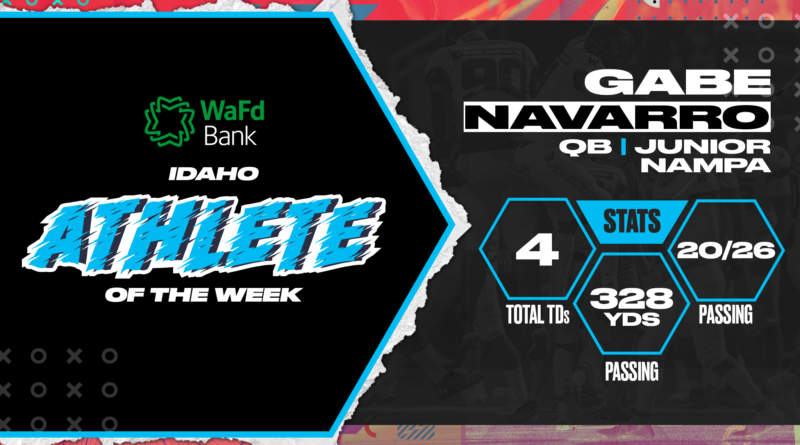 The junior completed 20 of 26 passes for 328 yards and a TD, and added three more rushing scores in a loss to Emmett. He finished with more than 400 yards of total offense.

Navarro received 51.23% of the vote, beating out Idaho Falls QB Skyler Olsen who finished second with 42.56%. Post Falls WR Carson Tucker finished third with 3.64% and Shelley DB Tomy Bradshaw finished fourth with 1.06%. There were over 124,000 votes tallied this week!

Lizbeth Soto, Vallivue girls soccer: Soto had five goals and an assist in an 8-1 win over Nampa.

Tiger Adolpho, Rigby QB: On the day he committed to Weber State, Adolpho went 16-of-23 for 264 yards and three TDs in a 51-12 rout over Thunder Ridge.

Gatlin Bair, Kimberly WR: Brought down four catches for 159 yards and three TDs in a 49-28 win over Mountain Home.

Tomy Bradshaw, Shelley DB: Registered three interceptions to help the Russets hold onto a 21-19 win over Hillcrest for the first 5-0 start in five years.

Cruz Hepburn, Lewiston RB: Entered the school records books with 244 rushing yards on 20 carries, which is thought to be a top-five mark, including two long TD runs in a loss to Sandpoint.

Donovan Jones, Eagle TE: Hauled in seven catches for 90 yards, including a 28-yard catch in traffic on a 4th-and-15 with 2:29 left that set up the game winning score in a 24-23 come-from-behind win over Meridian.

Hayden Kincheloe, Homedale RB: Hit the 200-yard rushing mark for a second consecutive week with 273 and three TDs on 20 carries in a 49-7 win over McCall-Donnelly.

Ty Koepp, Kendrick QB: Threw for 148 yards and two TDs, while adding 123 yards and three scores on the ground in an 82-12 win over Lewis County.

Tyler Lindhardt, Preston WR: Racked up seven catches for 103 yards and three scores to help the Indians beat Blackfoot for just the second time in a decade in a 27-26 win.

Jace McKarcher, Lewiston QB: Passed for 248 yards and three TDs, and added another 114 yards and a score on the ground in a loss to Sandpoint.

Blayne Meyer, Horseshoe Bend RB: Tallied 243 yards and three TDs as the Mustangs (4-0) remained unbeaten in a 50-30 win over Watersprings.

Skyler Olsen, Idaho Falls QB: Passed for 180 yards and ran for 70 more on the ground with three total TDs to keep the Tigers (5-0) unbeaten with a 32-20 win over Pocatello.

Carson Tucker, Post Falls WR: All but one of Tucker’s catches resulted in a TD as he finished with five receptions for 77 yards and four TDs in a 41-14 win over Lakeland.

Caden Young, Emmett QB: What more can he do? The all-state quarterback rushed for 180 yards and four TDs, and added 95 passing yards and a couple of scores in a 40-30 win over Nampa.