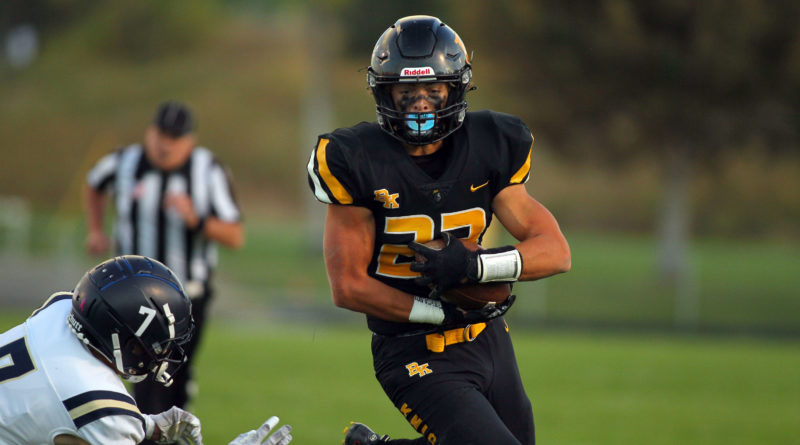 That was 24 times more than his next closest teammate – and only six fewer than Middleton quarterback Ky McClure, who threw the ball 48 times.

Enough work? Nah, the Bishop Kelly running back said after the game. He said he wasn’t even tired – and could carry the football another 42 times, if he had to.

“Whatever to help my team win”” Knothe said with a grin. “I feel great right now.”

So does the rest of his team after he had 315 rushing yards and five touchdowns in a 51-42 win Friday night over Middleton at Nick Ysursa Field.

“He’s just different,” Bishop Kelly coach Tim Brennan said. “We’ve had backs that maybe were faster, but we haven’t had backs that were as physical and just as talented as he is. I mean, he’s as good as we’ve had for a long time.”

The performance was Knothe’s best of the season thus far. He just outdid the 313-yard and 5-TD showing in the opening game of the year in a 35-33 loss to Eagle on Aug. 27 when Bishop Kelly missed on a last-second field goal.

Knothe, the 4A classification’s leading rusher, wasn’t about to lose like that again – and against his former school no less. He transferred from Middleton to Bishop Kelly for his ninth grade year.

“He had a huge game, and he’s a huge part of what they do, which we knew going in,” Middleton coach Bill Brock said. “But we didn’t have an answer for him tonight, obviously.”

Knothe got it going early with a 34-yard touchdown run by going through the heart of the defense and down the near sideline to give Bishop Kelly a 13-8 lead with 1 minute, 27 seconds remaining in the opening quarter. Knothe then had a 2-yard touchdown run moments later to put the Knights back up in front 20-14 early in the second quarter.

But his real magic didn’t come until the second half.

It stayed that way for the rest of the game as Bishop Kelly kept matching Middleton’s high-powered Air Raid offense, and that was mainly due to Knothe. He single- handedly scored all of their second-half points with other runs of 3 and 20 yards – with the latter coming with 8:14 remaining that put the game away for good.

Knothe racked up 169 yards and three scores alone in the second half. The latest outing brought his season total to 1,116 yards and 21 touchdowns. He’s now averaging 223.2 yards and more than four scores per game.

“It’s starting to be hard work paying off,” said Knothe, who has interest from the likes of University of California at Berkeley.. “I worked my butt off all summer, all last spring. And I really got my team to put in work, too, and my line. I’m glad we could all work hard. The summer is paying off for all of us.”

The win keeps Bishop Kelly in the hunt for its first 4A Southern Idaho Conference championship since 2018. The Knights were behind the 8-ball a bit after a surprising league loss three weeks ago.

“Thanks for bringing that up,” Brennan said with a laugh.

But with the Huskies facing tough games against Middleton (next week) and Vallivue later in their schedule, it could open the door for the Knights. Regardless, Brennan is impressed with how his team has responded with three consecutive wins.

“I knew they’d come back and work hard and they have and so we just got to continue to get better and maybe we’ll get another shot at Emmett if we can get to the playoffs,” Brennan said.

Bishop Kelly will be home again next week against Caldwell (0-6).

Meanwhile, McClure had a hand in every Vikings’ touchdown, and combined for 452 yards of offense. He went 32-of-48 for 353 yards and three touchdowns. McClure also was the team’s leading rusher with 99 yards and three scores.