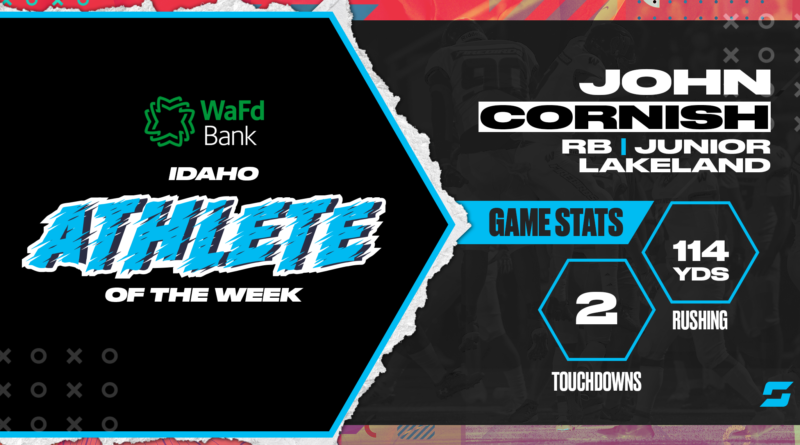 Congratulations to Lakeland running back John Cornish for being voted SBLive’s WaFd Bank Idaho High School Athlete of the Week for Sep. 13-19!

Cornish received 46.8% of the vote, beating out Clark Fork RB Carter Sanroman who finished second with 29.9%. Coeur d’Alene WR Isaiah Griffin finished third with 7.88% and Sandpoint girls soccer’s Kylie Williams finished fourth with 6.2%. There were over 28,000 votes tallied this week!

Eden Bower, Skyview volleyball: Bower was was named to the All-Tourney team of the Durango Classic in Las Vegas as the Hawks took 9th in the national tournament.

London Ispen, Centennial volleyball: Ispen had a stat line of 12 kills, 13 digs and two aces in a five-set win over perennial power Timberline.

Katie Compas, Parma volleyball: Compas chalked up 12 kills, 20 assists and a pair of blocks in a sweep over Homedale.

Jaxon Dines, Homedale QB: Dines combined for 263 yards and three TDs, including 176 and two scores on the ground, in a 38-21 win over Sandpoint.

Taylor Freeman, Rigby WR: Freeman hauled in 10 catches for 128 yards and a pair of TDs in a 35-0 shutout over Hillcrest.

Ezra Godfrey, Highland WR: Godfrey had five receptions for 132 yards and a 74-yard TD in a 41-14 blowout of Pocatello.

Brody Hasselstrom, Prairie RB: Hasselstrom finished one yard shy of a 300-yard game, but did still manage six TDs on the ground in a 72-24 win over Logos.

Angus Jordan, Genesee QB: Jordan threw for four TDs and ran for a 70-yard score in a 50-44 win over Clearwater Valley.

Caden Kelley, Rocky Mountain LB: Kelly recorded three tackles for loss, a pair of sacks and an interception to lead the Grizzlies in holding Centennial to just 49 yards of total offense in 58-0 blanking.

Hayden Kincheloe, Homedale RB: Kincheloe tallied an even 200 yards rushing and two scores on 29 carries in the 38-21 victory against Sandpoint.

Bobby Lee, Timberline LB: Lee piled up eight tackles, three sacks and a fumble recovery in a 35-15 win over Kuna.

Ky McClure, Middleton QB: McClure passed for 439 yards and four TDs to just one interception, while also scoring on a 3-yard run in a 42-16 win over Vallivue.

Jace McKarcher, Lewiston QB: McKarcher accounted for 283 yards, including 128 on the ground, and five TDs himself in a 63-21 win over Eisenhower (WA).

Jrew Plocher, Watersprings QB: Passed for 263 yards and three TDs, added 109 rushing yards and another score -and had an interception on defense in a 41-26 loss to Grace.

Parker Rushton, Borah RB: Rushton had an eye-popping 213 yards and five TDs on the ground in a 54-42 win over Boise.

Carter Sanroman, Clark Fork RB: Sanroman racked up 180 yards and two TDs, while also kicking a field goal in a 39-22 win over Lakeside.

Jonah Schulthies, Sugar-Salem WR: Schulthies corralled in seven passes for 114 yards and a TD in a 28-14 win over Marsh Valley.

Jack Whitmer, Highland QB: Whitmer went 17-of-21 for 308 yards and two TDs, while adding two more scores on the ground in a 41-14 rout over Pocatello.

Caden Young, Emmett QB: Young chalked up 300 yards of total offense with a TD through the air and on the ground in a 28-0 win over Ridgevue.