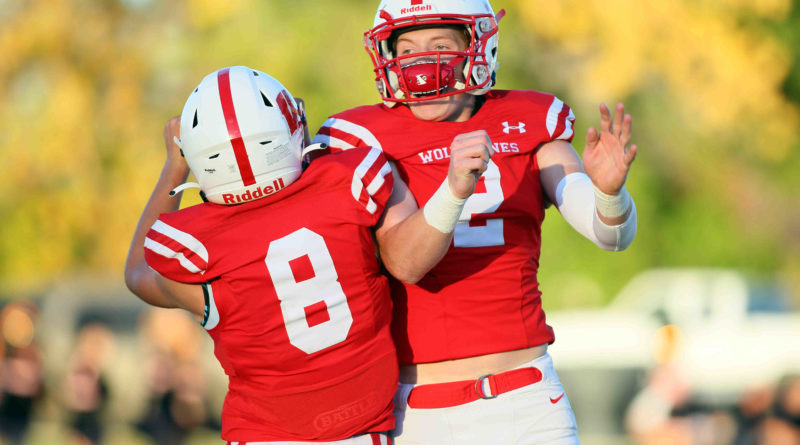 The Weiser High School senior quarterback tossed three touchdowns passes, including one to his younger brother, Brock, and his team opened 3A Snake River Valley Conference play with a bang by scoring 34 unanswered points in a 40-18 come-from-behind victory over arch rival Fruitland.

But the best part of it all won’t come until next week.

“My English teacher says every year if we beat Fruitland, she makes the whole team (a) pie. So we’re getting pie this week,” Spencer said with a smile.

Caramel apple pie to be exact.

By the looks of it early on, the No. 3 Wolverines (5-0) weren’t going to get their favorite dessert.

They fumbled the ball on their first play of the game when Fruitland senior lineman Mark Church forced Spencer to cough it up on a sack and junior lineman Marcus Jones recovered. The No. 7 Grizzlies (2-2, 0-1) turned that into points on a 6-yard run by junior quarterback Luke Barinaga for an early 6-0 lead.

Fruitland then rattled off 12 consecutive points on touchdown runs of 71 and 7 yards by seniors David Juarez and Alex Gonzalez, respectively, which put Weiser in an 18-6 hole with 51/2 minutes remaining in the first half.

It was the biggest deficit the Wolverines had faced all season.

“I don’t know if we were ready to play at the start like we needed to be,” Weiser coach Tom Harrison said. “We didn’t quite have that intensity. It took us a little while to get on track, but there were some true, true efforts by our guys to even keep us in so we could have a shot in the second half.”

The Wolverines did score right before the half thanks to a couple of lucky breaks. Spencer stretched the ball out on a fourth-and-1 play at Weiser’s own 33-yard line and got the first down by the nose of the football.

Spencer then completed a 32-yard pass to senior wideout Evan Haggerty at the 1-yard line on a tipped ball that went right through the hands of Barinaga. Senior halfback Jack Burke scored on the next play by diving towards the far pylon to trim the deficit down to 18-13 with 1:06 to go.

“We had some good fortune, there’s no question about it,” Harrison said with a laugh

It continued in the second half. Weiser had a third-and-17 from the Fruitland 45-yard line. Spencer appeared like he was going to be sacked in the backfield. But at the last moment, he heaved a throw down the near sideline. The wobbly pass somehow found its way to senior running back Willy Shirts, who found himself wide open.

“All I was thinking was, ‘I better catch it,'” Shirts said.

He did just that and ran the ball all the way down to the 10-yard line. Two plays later, he punched it in from 3 yards out to give the Wolverines the lead for good at 20-18 with 4:35 remaining in the third quarter.

“After that, we really kind of kicked it into high gear and decided that we’re really going to bring it to them,” Shirts said. “The momentum built off of that and we just got going.”

Spencer threw a 26-yard touchdown pass to Haggerty after his brother punched the ball right out of a Fruitland receiver’s hand. It was the first of three forced second-half turnovers by the Wolverines. Spencer then connected with Brock on a 30-yard score to extend the lead to 32-18 with 9:01 remaining.

But Spencer and the Wolverines were not quite done yet.

An interception by Kaleb Grove led to Spencer throwing his third and final touchdown on the night. He rolled out and threw a 9-yard touchdown pass to junior wideout Brayden Walker, who had the cannon go off right behind him, to really put the game on ice with 6:08 left.

It’s Weiser’s third win over Fruitland in the past four meetings. The Wolverines have won those games by an average of 33 points after losing 15 consecutive times to the Grizzlies from 2006 to 2018.

“Fruitland-Weiser has been a rivalry since who knows when,” Spencer said. “But our grade has never been afraid of them. We’ve always been wanting to play them.”