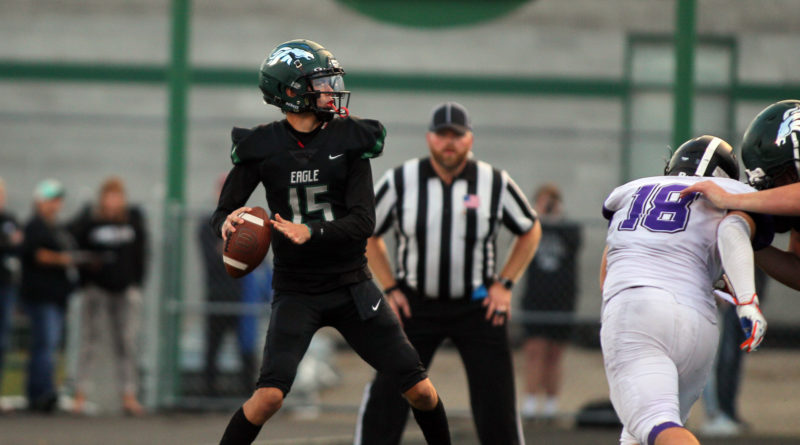 Here is an inside look at the top high school football games across the state of Idaho during the fifth full weekend of 2021:

Game nugget: The Mustangs have won 14 consecutive meetings over the Warriors, dating back to 2008.

About the Warriors: Meridian just snapped one 14-year series skid when it routed Capital, 35-0, on Thursday. Can the Warriors do the same thing this week? Ninth grade QB Zeke Martinez has continued to play beyond his years (660 passing yards, eight TDs). But don’t forget about RB Kross Antonnacchi (427 rushing yards, six TDs) and WR Quentin Riley (422 receiving yards, four TDs), who both rank in the top three in the 5A SIC in their respective categories.

About the Mustangs: Eagle has lost back-to-back games against a pair of top-three opponents in 5A in Rocky Mountain (48-28) and Mountain View (28-21). Last week’s loss to the Mavericks was particularly disheartening because it was in the final seconds. Good news – Eagle has not dropped three in a row since 2005. QB Jack Benson (801 passing yards, eight TDs) and WR Ian Duarte (401 receiving yards, four TDs) have a groovy connection.

Game nugget: In the past 12 meetings, each teams has won six games, dating back to 2006.

About the Thunder: It was deja vu for the Thunder last week: Another 3-0 start obliterated by crosstown rival Highland. Pocatello is hoping to repeat another aspect of last season by bouncing back with a win over this opponent (32-6 win in 2020). Getting RB Ryken Echo Hawk, who was held to just 62 yards after three consecutive 100-yard games, going again will be crucial, especially with question marks at quarterback.

About the Tigers: Raise your hand if you had the Tigers starting their season with a 4-0 mark? It has been a remarkable turnaround, especially since they came into 2021 on an 11-game losing streak. Off to their best start since 2013, Idaho Falls is getting a lot of mileage out of RB Kyan Jesperson who has rushed for at least 100 yards in all four games, including a 185-yard, three-TD performance against Thunder Ridge.

Game nugget: Bengals have won five of the past six meetings, including a 24-6 home victory in 2020.

About the Bengals: This is a group many in the 5A Inland Empire had been pointing to for years – and now it appears Lewiston is arriving to be league championship factors. A win against the reigning 4A semifinalists would be a nice boost to the statewide profile. Bengals will run, run – and run some more behind RB Cruz Hepburn (616 rushing yards, four TDs) and QB Jace McKarcher (383 rushing yards, 11 TDs).

About the Bulldogs It was surely a shock to the system giving up nearly 500 rushing yards to 3A powerhouse Homedale last week – and that run defense will be tested again at home. QB Parker Pettit (391 passing yards, 250 rushing yards, five total TDs), RB Gerrit Cox (327 rushing yards, seven total TDs) and the offense will need all the firepower they can find to keep up with the state’s top-scoring squad.

Game nugget: Weiser has won two out of the past three meetings, including a 42-0 victory in the 2020 state playoffs.

About the Grizzlies: Following a bye after a 26-21 loss to Cole Valley Christian, this will be Fruitland’s first game against a non-2A classification opponent. And with all the attention centered on Weiser and Homedale in the 3A Snake River Valley Conference, this would be a good time to join the party. The five-time 3A champions will rely on their run-heavy Wing -T offense by a committee of rushers, led by RB David Juaraz.

About the Wolverines: Weiser football is back! The Wolverines are off to their second 4-0 start in three under legendary 10-time state championship coach Tom Harrison – with a win over reigning 4A runner-up Emmett. Senior QB Brett Spencer, who has an offer from the University of Idaho and is also an all-state safety, and RB Willy Shirts are leading a rushing attack that is racking up yardage – and pummeling the interior of defenses.

Game nugget: The Hornets were just one of two teams to beat the Senators last fall – and only one by double digits (32-12 victory).

About the Hornets: Don’t let the classification-down tag fool you – Declo knows how to play power football, led by RBs Keegan Ramsey and Derek Matthews, who have combined for more than 1,300 rushing yards and 18 touchdowns this season. Matthews is also a three-time state wrestling champion. Declo’s only loss in the past 12 games was to West Side in last year’s snowy 2A semifinals (7-0).