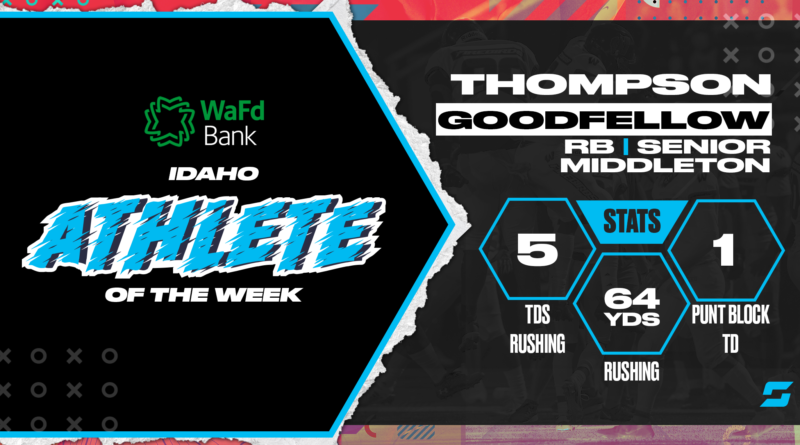 Congratulations to Middleton running back Thompson Goodfellow for being voted SBLive’s WaFd Bank Idaho High School Athlete of the Week for Sep. 6-12!

The senior scored nearly every time he touched the ball. He ran for five TDs and 64 yards on just six carries, while also blocking a punt return for a touchdown in a 70-16 shellacking over Caldwell.

Goodfellow received 44.48% of the vote, beating out Post Falls RB Jacob Sullivan who finished second with 32.83%. Kamiah RB Colton Sams finished third with 8.47% and Lapwai QB Titus Yearout finished fourth with 5.77%. There were over 25,000 votes tallied this week!

Adee Butler, Century volleyball: Butler had 22 kills, 5 aces and 3 digs in a 3-1 win over Skyline.

Kross Antonnacchi, Meridian RB: Antonnacchi rumbled for 114 yards and two TDs, while also starting the game with a 98-yard kickoff return for a score in a 52-7 dominating win over Timberline.

Adam Ball, Mullan/St. Regis RB: Ball ran for 165 yards and three touchdowns, but that’s not even the most impressive part. He did so on just four carries (41.3 yards per carry) in a 72-20 blowout win over Lakeside.

Taylor Freeman, Rigby WR: Again, when the Trojans needed a spark – the ex-quarterback gave it to them with eight catches for 115 yards and two TDs in a come-from-behind 28-14 victory over defending 4A champion Skyline

Kyan Jesperson, Idaho Falls RB: Jesperson flirted with 200 yards on the ground with 185 and three TDs to lead the Tigers to their first 3-0 start in eight years with a 21-12 win over Thunder Ridge.

Angus Jordan, Genesee QB: Jordan completed 9-of-11 passes for 254 yards and three TDs, while adding 122 yards and two more scores on the ground in a 62-36 win over Potlatch.

Javonte King, Blackfoot WR: King hauled in five receptions for 137 yards and a TD. But the real highlight was his 38-yard Odell Beckham Jr.-esque catch in the third quarter that turned the tide of the game in a 35-21 win over Snake River.

Kaimen Peebles, South Fremont QB:  Peebles passed for 241 and three TDs to help the Cougars (3-0) remain unbeaten in a 34-16 win over Aberdeen.

Jrew Plocher, Watersprings QB: Plocher racked up 352 yards of total offense and seven TDs as the Warriors picked up their first win of the season in a 58-12 rout over Mackay.

Colton Sams, Kamiah RB: Sams paved the way for Kubs with 248 yards and four TDs on only 15 carries. He also had eight tackles on defense in a 50-6 rout over Logos.

Jacob Sullivan, Post Falls RB: Sullivan nearly eclipsed the 200-yard mark with a 187-yard, three-TD night as the Trojans downed Moses Lake (WA) 42-26 for their first win of the season.

Jack Whitmer, Highland QB: Whitmer accounted for 332 yards of offense and three passing TDs in a 45-6 rout over rival Century.

Caden Young, Emmett QB: Young carved up the typically vaunted Bishop Kelly defense with 209 rushing yards and a pair of scores, while also throwing an 18-yard TD pass in a 21-0 blanking.