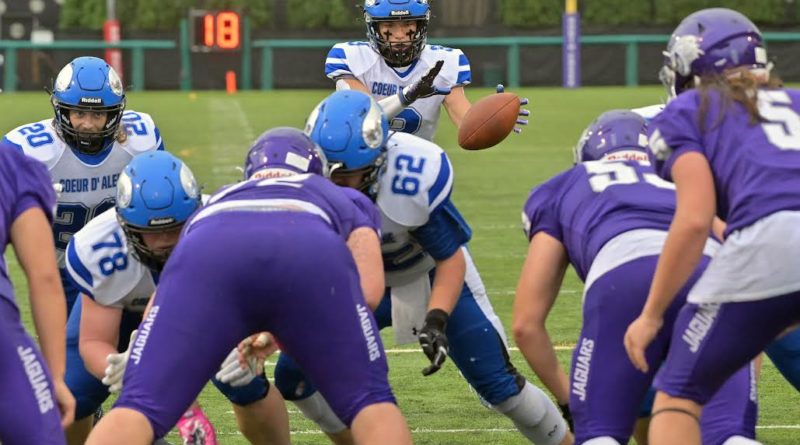 That is a fact.

And the Vikings will take a hard-earned victory back East.

After Kennedy McGill tossed a touchdown pass to Stephen Woodward in North Creek’s half of overtime, the Jaguars decided to go for the victory right there.

But Woodward was stopped just short of the goal-line on the two-point conversion reception, and the Vikings held on for a 43-42 win Saturday afternoon at rain-soaked Pop Keeney Stadium.

Coeur d’Alene trailed by two touchdowns late in the third quarter before the offense found its way. Quarterback Brayden Bengtson completed 19 of 31 passes for 216 yards and a pair of touchdowns.

McGill was a one-man wrecking crew, rushing for 222 yards on 23 carries, and was also 17-of-30 for 181 yards. He passed for three touchdowns, and ran for three more.

“That was a great test,” Vikings coach Shawn Amos said. “We will learn a ton from that game.”

Here are three observations from the Coeur d’Alene-North Creek game:

IT WAS A STATE-OF-WASHINGTON PRODUCT THAT SAVED THE VIKS

The home crowd was in a frenzy after McGrill delivered a down-the-middle 62-yard touchdown strike to Max Boden to give North Creek a 28-14 with a half-minute remaining in the third quarter.

Everything was going the Jaguars’ way.

And Isaiah Griffin took it from them.

Griffin, who started at Gonzaga Prep before transferring to Coeur d’Alene last fall while Washington was on COVID-19 pause, returned the ensuing kickoff 88 yards for a touchdown. The Viks got the two-point conversion, and suddenly only trailed, 28-22.

“It was instant momentum for us,” Coeur d’Alene running back Gunner Giulio said. “After that, we were popping.”

From that point on – the entire fourth quarter and overtime – the Vikings’ offense gained 139 yards and scored three touchdowns.

After that, it was back and forth – right to the final failed North Creek two-point conversion attempt in overtime.

“Even though it isn’t as pretty as we’d like it, they are battlers. Tradition carries you a little bit.”

KENNEDY MCGILL IS THE BEST QUARTERBACK IN 4A KINGCO

One of the best moves North Creek coach Torrey Myers made last spring was moving Jack Charlton out to wide receiver so McGill could play four games under center at quarterback.

And just months later, he looks vastly improved – and way more confident. He is making the right reads. He gets passes out quickly – and on points. And he can be a running playmaker, too.

“He was fast. He was slippery,” Giulio said. “He is a good player.”

And he might have recorded the best individual run in school history in the third quarter.

Myers opted to go for it on fourth-and-1 from the North Creek 32-yard line. McGill lined up directly behind the center, and made a push into what looked like a rugby scrum full of bodies.

The pile kept moving. No whistle could be heard. And suddenly, McGill charged out of the pack for a 68-yard touchdown.

“I was just trying to get the first down … and move the chains,” McGill said. “But my O-Line parted the sea for me. I took a few steps and all I had was an open field. It was a surprise, for sure. But I hopped, got out of there and I was running wide open.”

He finished with a career-high 403 yards of total offense – and a school-record six total touchdowns.

“This does feel like my team,” McGill said. “And I believe this is our most complete team. This was a step in the right direction by coming within one point of a state championship team like that.”

WHAT DOES THIS WIN MEAN FOR COEUR D’ALENE MOVING FORWARD?

Last season, the Vikings certainly made the case they were the best team in the state of Idaho.

But they were upended in the 5A semifinals on the road at Rocky Mountain for their only loss (or real close game).

Needless to say, it hurt.

And to start the 2021 season, the Vikings went to Lehi in Utah, and were pounded, 33-7. And in the second week, they nearly blew a big lead to North region rival Sandpoint before pulling out a 24-22 win.

With 34 seniors, most of them returning from last year’s squad, can this win get the Vikings on a roll? Amos thinks so.

“I think we have a chance to be pretty good if we take care of ourselves,” Amos said. “We are our worst enemies right now.

“But we take pride getting on a bus, driving 51/2 hours, getting off the bus and playing good teams like this. … We’ve played three good teams in a row, and on the road every time. We will go five weeks without a home game. But it is what we have to do to play teams that are good.”