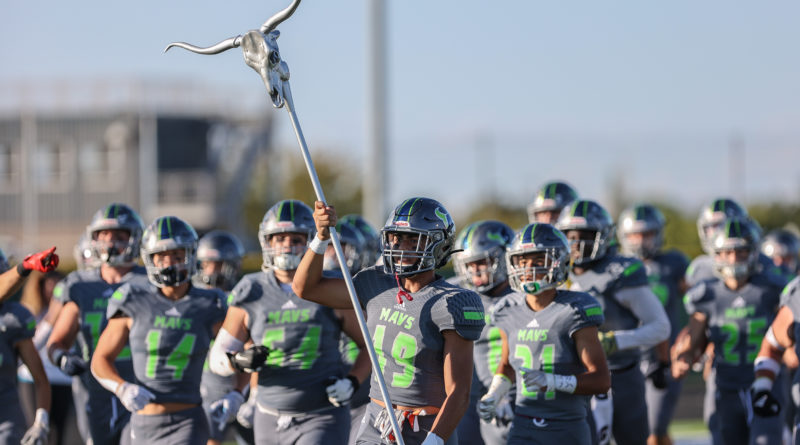 Dominic Sotomayer hauled in a pair of touchdown receptions from quarterback Dawson Wahl, including the game-winner on a five-yard pivot route with 14 seconds to play.

“I was a little covered at first, but I knew Dawson would see me,” Sotomayer said. “I started moving to get open. He saw me, got it to me, and we scored.”

It was the Mavericks’ (4-0) third victory of the young season over a team they lost to a year ago. Mountain View knocked off Meridian in Week 1 and downed Rocky Mountain the following Friday.

“It’s like a landmark; those are the three teams in our district every year that are the standard,” Mavericks head coach Judd Benedick said. “If you beat those three guys, then you are doing things the right way, you’re playing well.”

No. 7 Eagle (2-2) led by a point at halftime and went up 21-13 late in the third quarter when quarterback Jack Benson scored on a 42-yard read-option around the right side.

Makaii Pattwell had an electric 50-yard catch-and-run on the final play of the third quarter to jumpstart Mountain View’s offense. Two plays later, star tailback Quintez Evans ran it in from 20 yards out and then threw a wildcat pass to Mason Ashby for the tying two-point conversion.

The Mavericks were set to regain the lead midway through the fourth, but Wahl fumbled a snap at the 3 yard line that was recovered by Eagle’s Jedidiah Rathbun. Both teams also had multiple big plays called back due to penalties.

“We definitely did a lot of good things tonight, but there’s still a lot we need to improve,” said Sotomayer, who had five catches for 56 yards. “We had a lot of mental mistakes, and we need to work on that.”

Wahl completed 15 of 25 passes for 228 yards with two TDs and no interceptions. Evans finished with 119 rushing yards on 23 carries and also returned two kickoffs into Broncos territory.