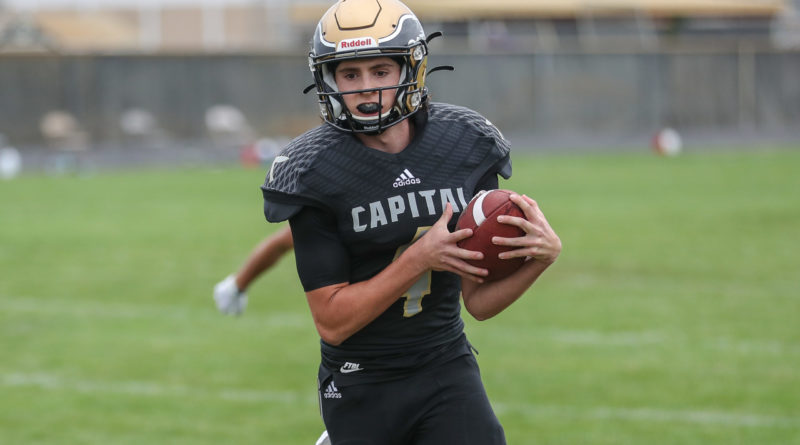 With his right arm in a sling, Max Clark used the other one to pull down his baseball cap so no one could see them.

Tears poured down his face as he walked off the Capital High School football field with his parents last October during the third game of the 2020 season.

The news was bad: Clark, the team’s starting quarterback, had just broken his collarbone for the second time in three years. It cost him the rest of his season.

But now, the senior signal caller is healthy – and is the 5A Southern Idaho Conference’s leading passer.

In three games, Clark has completed 76 of 98 passes (at a 76% clip) for 1,041 yards and 14 touchdowns, with just one interception for the No. 4 Eagles. They host eighth-ranked Meridian on Thursday night in their biggest test of the season at Dona Larsen Park.

“Both times I’ve gone through this injury, I’ve moved forward and rarely thought about it,” Clark said. “Doubts have never crept into my mind. I know I’ve worked hard, and the support I’ve been given throughout this whole process is awesome. It’s as if it never happened. We’re here now.”

Clark is a coach’s son. His father Bob Clark spent the better part of two decades at Boise High School, including 13 as its football coach, before coming over to Capital in 2017 as the running backs coach for longtime friend Todd Simis, the Eagles’ coach.

Max Clark came along, too. and immediately familiarized himself with the storied program. He was at each practice and on the sideline for every game as an eighth grader.

“He’s a football rat,” Simis said. “We just knew he was going to understand the game very well, and had paid very close attention from a small age to how the game of football works and operates. We had a pretty good inkling that he was going to be one of those guys that was all in.”

Clark proved that his ninth grade year. After breaking his right collarbone in the first freshman-team game of the season against Timberline, he returned to play in the last game of the year.

He then played on the junior varsity squad, and was also the varsity backup as a sophomore before finally taking center stage last year.

In his first-ever varsity start, he accounted for seven touchdowns and 264 yards of total offense himself – including 253 passing yards and six scores in the Eagles’ 55-12 win over Skyview in a COVID-19-delayed season.

Those six touchdown passes were the most by a Capital quarterback since University of Montana alum Makena Simis – Todd’s son – also threw for six scores during the 2012 season.

Clark’s debut came as no surprise to the coach.

“He just did what Max does,” Simis said.”He just executed the plan, didn’t make any mistakes and made some nice throws. I knew he would do what we asked him to do and I knew we had good guys around him. He had a hot hand, and it was fun to see, for sure.”

But Clark’s time under center was once again short-lived. Nearly two weeks later in a game against Timberline, a defender landed on him during a fly-sweep run in the first quarter, and the force of the collision planted his right throwing shoulder hard into the ground.

Clark instantly knew it was bad.

He broke the same right collarbone – on the same field against the same team, no less. The break occurred right where the 4-inch screw from his first surgery had ended.

Clark still gutted out for the remainder of the quarter so his back-up, Avery Downey, could finish the game, and not go over the allotted five-quarter rule (between JV and varsity games).

“Clarks are tough is what my dad says,’” Clark said. “So until the coaches pull me out, I’m not coming out because I love my team, and I love my school and would do anything for them.”

That was evident when Clark also helped Downey break down film before and after practice. He also worked with him during practice, and was on the sidelines for the remaining games, always offering advice.

“He flipped the switch pretty quick,” Simis said. “It was painful, sad and you hate to see injuries like that, but as much as he could, he turned the page to how can I help the team? That’s how Max is about everything.”

Clark was given a six-week timetable following his surgery to return to football. But three weeks later, he posted a video of himself slinging the ball around at practice, hoping to convince the coaching staff he could be ready for the team’s Class 5A quarterfinal playoff game against Mountain View in early November.

But none of that came to fruition – Clark sat, and Capital lost the game, 21-14.

The what-ifs are long gone now.

Clark helped the Eagles win the Famous Idaho Potato Bowl Challenge 7-on-7 passing tournament in July before putting on full pads for the first time in almost a year on Aug. 26 against Nampa at Dona Larsen Park. He went 26-of-41 for 257 yards, including three scores in a 35-21 win.

“I’m happy for him. He’s deserving of everything,” Simis said. “Just knowing what he’s been through, and the level of play he’s performing at – I’m excited for him. He’s planned and prepared for this moment.”

He followed that opening-day performance by going 24-of-25 for 396 yards and six touchdowns against Owyhee, and finally a 24-of-31, 346-yard, five-touchdown outing against Centennial last week.

So Clark certainly isn’t hiding from anyone anymore.

“I’m embracing it and loving every second of it,” Clark said. “Football is the highlight of my life right now. Any opportunity I’m given, I’m grateful for.”