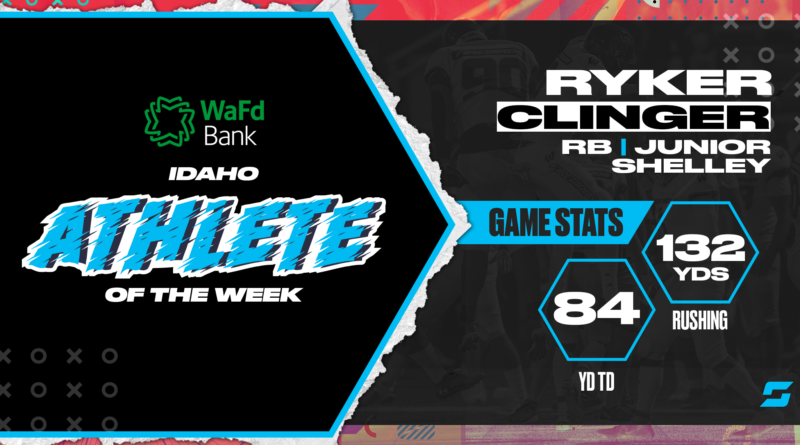 Congratulations to Shelley running back Ryker Clinger for being voted SBLive’s WaFd Bank Idaho High School Athlete of the Week for Aug. 30-Sep. 5!

The junior galloped for 132 yards, including an 84-yard TD in a 20-7 win over reigning three-time 3A champion Sugar-Salem.

Clinger received 56.15% of the vote, beating out Moscow QB Leon Hutton who finished second with 35.98%. Deary QB Kalab Ricard finished third with 2.41% and Butte County RB Treyton Miller finished fourth with 1.5%. There were over 23,000 votes tallied this week!

Brayden Bengtson, Coeur d’Alene QB: Bengtson completed 21-of-32 passes for 218 yards, and kicked a 20-yard field goal in the final minutes that proved to be the game winner in a 24-22 win over Sandpoint.

Thomas Calder, Lakeland RB:  Calder chalked up 101 rushing yards and three total TDs, with the third coming through the air on a 55-yard catch in a 39-14 win over Columbia.

Jaxon Dines, Homedale QB: Dines used both his arm and his legs with 110 passing yards and three TDs to go with 133 yards and two scores on the ground in a 54-8 win over Ontario (Ore.).

Quintez Evans, Mountain View RB: Evans pounded the rock 30 times for 184 yards and a pair of TDs in a 26-20 win over reigning state champion Rocky Mountain.

Leon Hutton, Moscow QB: Hutton tallied 316 yards and five TDs, including the game winner with 30 seconds remaining in 40-33 come-from-behind win over Clarkston (WA). He also ran for a score.

Angus Jordan, Genesee QB: Jordan accumulated almost 500 yards of offense by himself with 263 yards and four TDs through the air, while adding another 220 yards and three scores on the ground in a 52-28 win over Logos.

Ty Koepp, Kendrick QB: Koepp accounted for TDs himself with four of those coming through the air in a 6-of-9 161-yard effort in a 72-0 shellacking over Kootenai.

Zeke Martinez, Meridian QB: The younger brother of Malakai Martinez, who injured his throwing shoulder last week, had about as good of a debut for a freshman with 10-of-14, 180-yard, three-TD effort in a 41-0 shutout of Centennial.

Deagan Martinho, Eagle RB: After Ethan Mikita went down with a torn ACL last week, Martinho picked up the mantle to the tune of 142 yards and two TDs on just 10 carries in a 42-7 win over Kuna.

Treyton Miller, Butte County RB: Miller racked up 274 yards and three TDs on 31 carries in a 60-26 win over Lighthouse Christian.

Jrew Plocher, Watersprings QB: Plocher put up 314 yards of total offense with 219 rushing yards and 95 passing in a 58-20 loss to Castleford.

Kalab Ricard, Deary QB: Richard scored in three different ways with three passing, one rushing and a punt return TD in a 38-18 win over Lakeside.

Bryler Shurtliff, West Side WR: Shurtliff recorded three catches for 61 yards, including a 30-yard TD catch, and had two interceptions on defense in a 27-0 blanking of Snake River.

Carter Woodland, Notus RB: Woodland racked up an eye-popping statline of 335 yards and five TDs on 21 carries in a 54-12 win over Council.

Gabe Zavala, Salmon River QB: Zavala did it all with a touchdown pass, three rushing scores and a 40-yard interception return for a TD in 60-0 rout of Meadows Valley.

Wade Zenner, Timberline QB: Zenner totaled almost 400 yards of offense by going 20-of-25 for 309 yards and a pair of TDs, while adding another 69 yards and a score on the ground in a 48-15 win over Ridgevue Thursday.