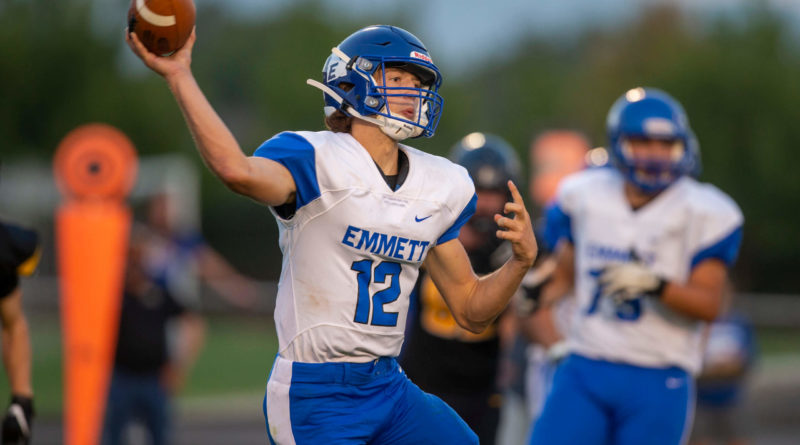 EMMETT – Back in the comfortable role of underdog, ninth-ranked Emmett dominated on both sides of the ball Friday night en route to a historic performance against No. 1 Bishop Kelly.

Senior quarterback Caden Young accounted for all three of the game’s touchdowns in a 21-0 4A Southern Idaho Conference victory. It was the Huskies’ first-ever win over a top-ranked team.

“I don’t really know what it is,”Young said of the Huskies’ recent trend of upsetting state powers. Emmett, which was coming off a surprising loss at 3A Weiser, won its first SIC title a season ago and made a Cinderella run to the Class 4A finals.

“I know we didn’t play good last week, so we had to prove ourselves this week. We knew we were going to be playing the best of the best tonight, and if we wanted to win we would have to give it our all.”

Emmett (2-1) received the opening kickoff and needed just six plays to march 70 yards, going up 7-0 on a 16-yard touchdown pass from Young to Caseyn Pearson.

Following a Bishop Kelly (1-2) three-and-out, Young out-ran the defense for a 51-yard score on the Huskies’ next drive.

Another Young touchdown run – this time for 33 yards – made it 21-0 early in the second quarter.

“That was so big,” Young said of the fast start. “Our guys were feeling it and playing hard. That’s what we needed.”

Bishop Kelly moved the ball all night on the slippery grass field but could never break the Huskies’ stout defense. Emmett intercepted three passes and stuffed a third-quarter fake punt.

“They had a really good game plan,” said Knights senior tailback Seth Knothe, who finished with 80 hard-earned yards on 17 carries. “We started to get a little momentum there, but we just made some costly mistakes. We’re going to work hard in practice the next couple weeks and get ourselves together.”

Young threw for 63 yards and carried it 27 times for 205 yards as Emmett picked up its second consecutive win over the Knights. Senior running back Jeffery Lockett added 78 yards on 20 carries.

During his post-game speech, Emmett coach Rich Hargitt praised the Huskies’ physicality on offense and defense.

“We knew it was going to be physical and we would have to play them for all four quarters,” Young said. “It didn’t matter that we were up 21-0 in the first half – they easily could’ve come back and won that. So we had to execute and we had to play well for four quarters, and we knew that coming in.”