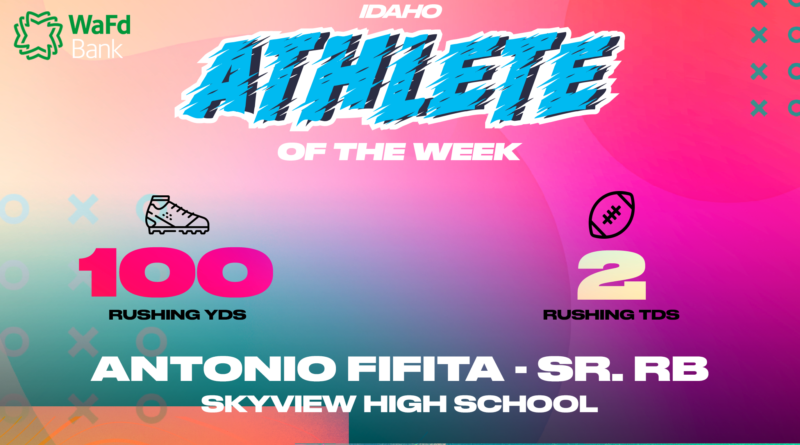 Congratulations to Skyview running back Antonio Fifita for being voted SBLive’s WaFd Bank Idaho High School Athlete of the Week for Aug. 23-29!

The senior barreled his way to 100 yards and a pair of touchdowns in a dominating 41-6 victory over crosstown rival Columbia.

Tiger Adolpho, Rigby QB: Adolpho only missed on five targets in 22-of-27 outing for 287 yards and three touchdowns in a 41-6 victory over Sky View (UT).

Brody Beck, Aberdeen QB: Beck primarily used his legs to the tune of 190 yards and three touchdowns in a 38-15 victory over American Falls.

Rylan Binford, Homedale RB: Binford chalked up 217 yards on the ground. He ran for 179 yards and three scores to go with three receptions for 38 yards and a TD in a 36-24 win over Caldwell.

Landon Cheney, Nampa Christian QB: Cheney went 8-of-16 for 312 yards and three touchdowns in a 40-12 win over Wendell.

Max Clark, Capital QB: Clark completed 26-of-41 passes for 257 yards and three scores in his first game back since breaking his collarbone last season in a 35-21 win over Nampa.

Gerrit Cox, Sandpoint RB: Cox rumbled for 156 total yards and 5 TDs. He ran for 110 yards and four scores, with another three catches for 46 yards and a TD in a 35-7 win over Post Falls.

Quintez Evans, Mountain View RB: Evans galloped for 131 yards and a TD on 22 carries in a 14-13 come-from-behind win over Meridian.

Taylor Freeman, Rigby WR: Senior picked up where he left off last season by catching 10 passes for 137 yards and a score in the team’s win over Sky View.

DJ Green, McCall-Donnelly RB: Green did it both on the ground and through with four total touchdowns. He ran for 114 yards and two scores, while hauling in two TD catches in a 41-0 rout over Orofino.

Tao Johnson, Thunder Ridge QB: Johnson put up 315 all-purpose yards. He went 17-of-19 for 245 yards and a touchdown through the air, while adding another 70 yards and a score on the ground in a 26-25 win over Blackfoot.

Zach Johnson, Lake City WR: Johnson pulled in eight catches for 108 yards and a score in a 14-3 win over Lakeland.

Seth Knothe, Bishop Kelly RB: Knothe had an eye-popping 307 yards and all five of his teams touchdowns in a 35-33 loss to Eagle.

Taylor Marcum, Timberline RB: Marcum racked up 94 yards on the ground for a pair of TDs, while also returning an 80-yard kickoff for a score in a 48-29 win over Borah.

Carter Woodland, Notus RB: Woodland made the most of his 11 carries with 210 yards and four touchdowns in a 54-12 shellacking over Tri-Valley.