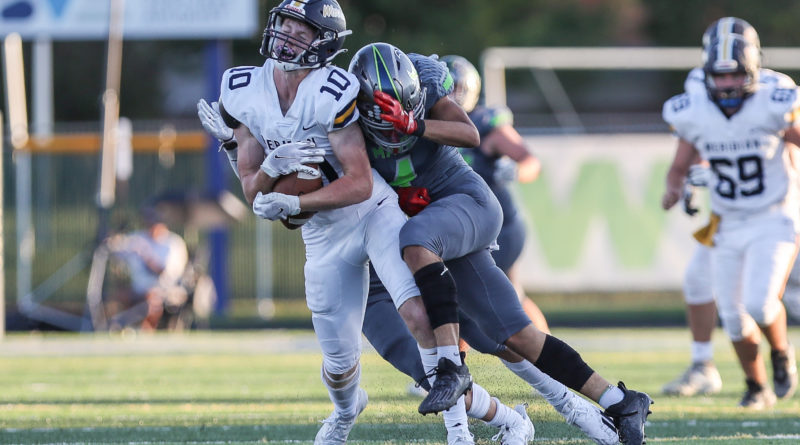 MERIDIAN – There’s been talk this offseason of the Meridian High School football team being the vaunted 5A Southern Idaho Conference’s newest powerhouse. And that very well still could be the case.

But Mountain View showed why it is a perennial contender – and has been for almost a decade now.

The Mavericks edged the Warriors for a 14-13 come-from-behind win Friday night at their newly-upgraded Idaho Central Credit Union Stadium that came with a new video scoreboard, soundboard and artificial field turf.

“We don’t care about the chatter – preseason rankings are preseason rankings,” Mountain View senior defensive lineman Jackson Beck said. “We’re the type of team that’s going to go out there and we’re gonna prove it. We’re not gonna try to do too much smack talk. But we’re just gonna go and prove it and do what we can do to win the game. So for us to send a message like that, I think it’s really good for our team and really good for our confidence going into the next week against Rocky (Mountain).”

Senior Quintez Evans ran for 131 yards and a touchdown on 22 carries for the Mavericks (1-0 5A SIC, 1-0 overall), who had to overcome a 13-0 halftime deficit. They fell into the hole due to a pair of long Meridian scoring drives, all because their defense couldn’t get off the field.

The Warriors (0-1, 0-1)’ first possession of the game saw them go 80 yards on 19 plays in seven minutes, 17 seconds – capped by a 1-yard run by senior quarterback Malakai Martinez. They then went on a drive that consumed more than half of the second quarter, and a Martinez to Kross Antonnachhi 3-yard scoring connection ended a 65-yard, 16-play drive that spanned 6:53 to put Meridian up 13-0 with 10 seconds remaining in the half.

“At one point in the first half I said, ‘Guys, our defense has been on the field for a long time,’” Mountain View coach Judd Benedick said. “They were starting to get gassed.”

Meridian, which sent Mountain View to the worst start in program history at 0-3 after snapping a 12-year losing streak last season, appeared well on the way of beating its crosstown rival again. The Warriors got the ball to start the second half and marched to Mavericks’ 15-yard line following a Mountain View pass interference call.

But a Mountain View sack, no-gain stuff and two pass incompletions resulted in a Meridian turnover on downs – and put the Mavericks back in business.

“As soon as the defense got that stop, I knew we were scoring,” said Evans. “We told our defense, ‘You guys keep getting stops, we got to score.’”

Mountain View methodically marched right down the field in 12 plays, 10 of which were runs, including its first score of the game on a 2-yard run by Evans with 3:28 to go in the third.

The Mavericks then forced the Warriors into a quick four-and-out. Five plays later, they were in the end zone again, this time on a 24-yard run by senior Dallas Slocum with 16 seconds remaining in the third quarter.

Mountain View rushed for 117 yards in the second half after being held to just 80 yards of total offense in the first.

Kicker Mason Labra, who shanked a 26-yard field goal on the Mavericks’ first drive of the game, redeemed himself with the ensuing extra point to give them the lead for good at 14-13.

However, the Mavericks did have to survive a late game-winning bid by the Warriors.

Without Martinez, who confirmed to SBLive Idaho after the game that he had hurt his right throwing arm in the fourth quarter, Meridian drove down to the Mountain View 16-yard line with backup quarterback Brady Lindley. It set up a potential go-ahead 33-yard field goal by Eli Arsenault with 56 seconds to go.

Arsenault’s kick had the distance, but sailed wide left to preserve the victory for the Mavericks.

“It was super exciting just to have fans again,” Benedick said. “I’ll be honest, we lined up for the national anthem, it was finished, and all of a sudden the crowd’s going nuts and one of my coaches on the headset says, ‘I forgot what that sounded like.’ … The community and the school, the fans, the kids, everybody showed up and just made it a really fun atmosphere on a Friday night. Lots of bad stuff going on in the world, but that was fun.”

Martinez went 17-of-27 for 157 yards and a touchdown. Quentin Riley hauled in nine of those passes for 100 yards, while Antonnachhi eclipsed the century mark on the ground with 109 yards and a TD for the Warriors, who hosts Centennial in their home opener next week.