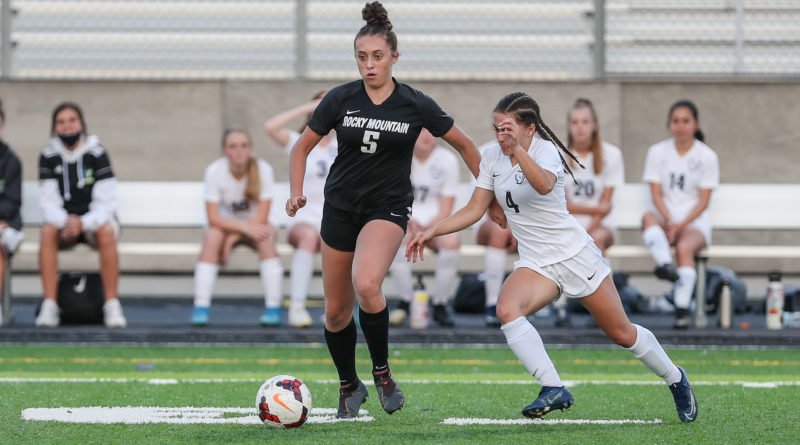 Kelsey Oyler is a natural to the outside world.

The 2021 Rocky Mountain High School grad is a two-time Gatorade Player of the Year for Idaho girls soccer.

She’s also a three-time state champion, a two-time 5A Southern Idaho Conference Player of the Year and an All-American with a career stat line of 66 goals and 69 assists – a program record.

The midfielder/forward is set to play for Gonzaga in the fall.

But the journey to all that acclaim was far from easy.

“It’s funny, people see kids like her and think, ‘They’ve just always been good and it’s always been easy for them,’” said Boise Timbers/Thorns Director of Coaching and Player Development Eric Simmonsen. “People don’t realize all the work, energy, commitment, effort and learning that she puts in. People really don’t see that side of her.”

Oyler had a lot to live up to too.

Her uncle Chad Oyler played at BYU, while older sister Kaylee Oyler was a five-time track and field state champion at Rocky Mountain who went on to compete for Montana State University.

Kelsey Oyler quickly carried on the family name, though. Less than four years after beginning her career at 4 with her twin brother Keegan Oyler, an Oregon State University signee, she was playing up with the older kids.

“When the refs checked everyone in and went through the names, I had to hide behind my parents’ chairs until the game started and then I could run onto the field,” Kelsey Oyler said while laughing.

The trick didn’t go on for long.

Oyler legally played up against girls 1-2 years older in club soccer for FC Nova, now known as the Boise Thorns. Despite typically giving up six inches and 20 pounds, she held her own for more than four years.

“She always made up for it with grit and tenacity,” Simmonsen said. “She was always a competitor. She very much took on the technical side, ball striking and using both feet to her advantage. She also had to figure out how to make space and avoid pressure. She had to learn all of those things at a very young age to help make the game a little easier for her.”

But after a while, it began to have detrimental effects on both her play and confidence. Players and coaches adapted to her style. It got to the point where opposing players swarmed her and she immediately went down at contact.

So Oyler made the difficult decision of going back down to her own age group in the seventh grade.

However, Oyler’s size still continued to plague her.

It led to her developing Osgood-Schlatter disease in both knees in the sixth grade. According to John Hopkins Medicine, it’s a condition affecting children experiencing growth spurts that causes pain and swelling below the knee joint.

She got custom inserts for her shoes and tried all kinds of different therapies, including shock therapy, but they only masked the problem.

Most kids grow out of it in one to two years.

It took Oyler five years. She still has bumps on the bottom of her kneecaps to this day.

“I actually ended up having a limp when I ran for a while because I was so used to it,” Oyler said. “When it finally ended, I had to purposely do more training with my footwork just to break the habit.”

It remarkably didn’t slow her down, though.

She still made the Rocky Mountain varsity team as a freshman, all 4-foot-10 of her. Longtime coach Donal Kaehler, who just completed his 13th season, did have some reservations.

“I thought she was what we needed. But she was very small and scrawny,” Kaehler said. “So when she finally arrived at Rocky, we took a look at her and said ‘Hmm, is she really going to survive or not?’”

Oyler did a lot more than that.

As an alternate, it took her just three games to score the first of 66 career goals in a game against Mountain View on Aug. 21, 2017. She made a run on the left side to get a one-on-one against the keeper. Oyler won that matchup by kicking it across her body to the far post.

She then started from districts on and the Grizzlies took third at state that season.

That offseason was a turning point for Oyler.

Her club team FC Nova went to the ECNL (Elite Clubs National League) playoffs, advanced to the semis of the Far West Regionals and won the North American Cup Championship – a tournament featuring the top 18-25 teams in the nation.

She attended the ECNL National Training Camp at the University of Portland, committed to Gonzaga University and started working with OFFTHEFIELD – an athletic training facility in Meridian, which trains several college and pro athletes like former NFL lineman Mike Iupati.

Oh, and she shot up to 5-foot-7 after doctors said she would never get any taller than 5-1.

“She got more confidence during that summer. She wanted to impress us coming into her sophomore year,” Kaehler said. “I think she was a little intimidated when she was a freshman. But when she came back as a sophomore, she was not intimidated by anyone. That confidence goes a long way.”

She started every game that season, was an All-SIC first-team selection and helped the Grizzlies to an unexpected state championship.

They trailed Boise 3-0 with 15 minutes remaining in the 2018 state title game. The Brave had beaten them twice that season by a combined score of 6-1. But Rocky Mountain miraculously pulled off a 3-3, 6-5 penalty kick shootout win with Oyler scoring the second goal in regulation before scoring the third goal in PKs.

“No one expected it at all. I don’t think any of us did either,” Oyler said. “It’s still to this day my favorite memory and the best high school game I’ve ever been a part of.

“They could make a movie about that game.”

She followed that up by leading the Grizzlies to a second consecutive state title on another penalty kick shootout win over Boise. Oyler then claimed SIC, 5A State and All-Class State Player of the Year awards. But it was the Gatorade Idaho Player of the Year award later in the spring that really put things in perspective for her. She joined the likes of childhood idols and school legends Brooke Heidemann and Raimee Sherle in winning the state’s top award.

Heidenmann has served as one of her club coaches for the past few years, while Sherle is a family friend after playing with her older sister Kaylee.

“When I was just starting out, I went to their games and watched them play, and to me,  they were like superheroes,” Oyler said. “So the fact that people even put me in the same category with them is crazy. Going into my freshman year, their names were all over the school. So I never would have expected to be right up there with them.”

And this past season, Oyler pulled off feats that neither one of them ever accomplished.

She broke Sherle’s all-time school assist record (62) with a dish to Larissa Wegner in a 12-0 rout over Madison during the opening round of the 5A state tourney on Oct. 22, 2020. Oyler then helped Rocky Mountain become the first 5A team, boys or girls, to win three consecutive state titles. This one came in regulation via a 2-1 win over Boise.

Numerous accolades and awards came to her in the coming weeks and months.

Oyler repeated as both the SIC and Gatorade Idaho Players of the Year. She became just the third player in Idaho history to win the Gatorade award in consecutive  years. Oyler put her name next to Weiser’s Lauren Bouvia (2016-17) and Centennial’s Sofia Huerta (10-11), who is currently playing for the OL Reign in the National Women’s Soccer League and is a former United States national team member.

Oyler was one of only 45 players to be selected and play in the High School All-American Game in St. Louis, Missouri on May 29. Oyler, along with Kuna’s Alexis Haws, a Boise State signee, were on the West team, which fell 4-1.

“When I look back on this I’m gonna have no regrets,” Oyler said. “I know that I did everything I could to leave my stamp on Rocky. Rocky’s been in my family for so long. So the fact that I’m getting to leave it in such a good way, is just amazing to me. Rocky will always mean so much to me.”

But Oyler is not done yet.

After playing in her final club game in the semis of the Far West Regionals for the Boise Thorns at Boise’s Simplot Sports Complex just a few weeks ago, Oyler headed north to her new home in Spokane, Washington. It’s a place already familiar to Oyler.

She spent the entire spring there after graduating early in December. Oyler had originally planned to play for head coach Chris Watkins and the Bulldogs this winter and spring, but because of the coronavirus pandemic, the NCAA made a rule that no early grads could play soccer this past season.

Oyler still attended classes, practice and was on the bench for all 11 of Gonzaga’s games.

“It was a really good start to know what is going to be expected in the fall season,” Oyler said. “Instead of trying to figure out how the team plays, how the coaches coach and how to interact with the girls while you’re trying to start college and then play a full-on season, now I have an idea of what all that is about going into the fall. So I kind of have a leg up on the whole college soccer experience and the next chapter of my life.”

A chapter that was earned, not given.

“Girls like Kelsey make coaching fun and worthwhile,” Kaehler said. “You watch a skinny little freshman come in and you watch her develop. You hope you have some responsibility for that development, but you know you were very small in that. And you just watch year after year as she gets better, gets more confident, gets stronger, and becomes just a better person overall. That’s what happened with Kelsey.”