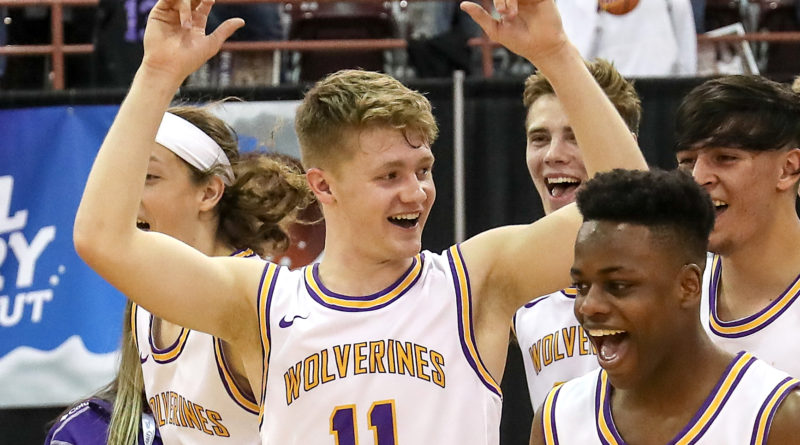 The unincorporated area has a population of around 400 and is frequented by passersby on their way to popular Idaho vacation destinations Lowman and Stanley. Paul Revere Dick, the founder of the popular 1960s and 70s rock group, Paul Revere and the Raiders, also hails from there.

But for the last four years, it has belonged to Covy Kelly. And it’s easy to see why. The local boys basketball star gave people in Garden Valley a lot to talk about during his record-breaking run.

“In a previous life, I was a fighter pilot in the Air Force and I was around four-star generals and astronauts and high-achieving individuals,” Garden Valley boys basketball coach Joel LaFleur said. “But I’ll put his work ethic up against anybody I’ve ever been around. He’s a special kid.”

Even his name is “special” – one that was purely accidental.

His father Cory Kelly was signing his name for something when the clerk mistakenly read it back “Covy.”

“He writes his r’s like v’s,” Covy Kelly said while laughing.

But bad handwriting and all, his first child’s name was born.

“It’s definitely a unique name,” Kelly said. “To this day, I’ve never met anyone with the same name as me.”

Kelly’s name is far from the only distinctive thing about him, though.

He made quite the impression early on.

When Kelly was 6, his mother, Heather Kelly, was the Garden Valley High School girls basketball coach. So Covy Kelly often tagged along. He tried to beat the players at sprinting and shooting drills. And to his credit, Kelly did get the better of a few of them a time or two.

“They would always tell me how good I was for being so young,” Kelly said.

That wasn’t by accident.

The new Garden Valley School opened around the time Covy was in fourth grade. So after the boys basketball games were done, Covy shot.

“The Athletic Director of our school at the time would turn off the lights to try and get me to want to go home,” Kelly said. “At first, he would dim the lights. So I was like, ‘I’ll just keep shooting until he actually shuts them all the way off.’”

It wasn’t long after that Kelly didn’t have to wait his turn anymore.

He was named the Freshman of the Year and a first-team all-league selection in the 1A Division II Long Pin. But he still continued the late-night shooting drills.

“I remember practice getting over at 7:30 (p.m.) and I check my phone and it’s 9:30 and I’m still rebounding for him,” LaFleur said. “There was something kind of therapeutic about (standing) around rebounding for a kid shooting jump shots like that.”

By the following year, Kelly was both the talk of the town and the state.

Kelly was both the 1A DII State and Long Pin Players of the Year his sophomore season. But it was his performance in the state championship game that really got everyone’s attention. He broke Dallas Cowboy linebacker Leighton Vander Esch’s state scoring record by dropping 38 points.

The only thing Kelly focused on though, was the 83-74 loss to Lighthouse Christian.

“One of the Idaho sports reporters came up to me after the game and they were trying to talk to me and I was super short with them,” Kelly said.

But the magnitude of the moment finally hit him when Vander Esch, a former Salmon River and Boise State standout, personally reached out. The two have remained in close contact ever since.

“I always ask him for advice because he’s living out my dreams,” Kelly said. “He came from the same district as I did, so that really motivates me to keep going.”

Kelly’s junior year saw him repeat as the league MVP. It was highlighted by him breaking the school’s scoring record with 54 points in a 100-75 win over Cascade on January 25, 2020. But despite those efforts on a team that returned seven players from that title game run, the Wolverines were shown an early exit from state. They went two-and-out and lost those games by a combined 43 points.

“We kind of got complacent, myself included,” Kelly said. “We kind of thought we’d just walk right back to the championship because we did it the year before and we were returning all of our guys pretty much. We didn’t work as hard as we probably could have.”

Kelly made sure that wasn’t ever going to happen again, even with the added coronavirus restrictions to deal with.

He created a makeshift weight room in his very own backyard. It included two benches, one for dumbbells, and the other for benching with hamstring curl and quad extensions. There was also a squat machine with an attachment for lat pulldowns. And by the end of last summer, the entire team was there.

“Those losses made an impression on him,” LaFleur said. “Covy puts the work in. But the thing with Covy I always try to get through to him is, it’s not necessarily going to be enough for you to just do it. You have got to hold others accountable. You have to get them in the gym. You have to get them to get better, so you don’t have to pull the whole load at certain times, and that’s exactly what he did.”

Kelly also got some help in the form of his childhood best friend. Josh Gillespie came back home for his senior season after starting for 5A Mountain View the past few seasons. His return proved pivotal in more ways than one.

Kelly ended up breaking his left ankle in football during a 42-36 win over Horseshoe Bend on Oct. 16, 2020. He remarkably still played on it three weeks later in a 46-28 first-round playoff loss against Carey.

The injury left him hampered through much of his senior season.

“Josh pretty much took on the role of leading our team, making sure everybody was working hard,” Kelly said. “I was still there encouraging, but I wasn’t there competing in practice. He’s a huge reason for our success this year.”

Yet, Kelly still had his moments. He led a 25-point comeback on the road against 1A Division I powerhouse Lapwai, which won its 11th state title this past season, by tipping in the game-winner with five seconds left. Kelly also nailed a 23-footer at the buzzer in a win over 2A Soda Springs.

He miraculously only missed one game all year, and that was during the second game of the regular season.

“During practice, I’d always see him out of breath and just looking miserable, but yet he still kept pushing through,” Gillespie said. “So I’m sitting there like, ‘I got it easy, just practicing.’ So he definitely pushed me to have a good mindset. It’s like, ‘This dude is playing on a bum ankle, what excuse do I have?’ It was definitely a trickle down effect that he had on the entire team.”

The team went 21-1 on its way to league and district titles. And by the time the state tourney rolled around, Kelly was 100-percent healthy.

He combined for 45 points, 14 rebounds and 8 assists in wins over Carey and Rockland. But Kelly saved his best for when it mattered most.

He went 15-for-24 in the state title game, including tying the 1A Division II state record for 3-pointers made in a single game (7) to break his own scoring record with 45 points. But more importantly, he delivered the first state title in program history in an 88-73 win over Dietrich.

Kelly was the Longpin MVP for the third year in a row, sharing the honors with Gillespie, and named the 1A Division II State Player of the Year for a second time. Kelly then waded through more than 10 offers for basketball and football, which included College of Idaho, Linfield University and George Fox University. He ultimately chose to join Gillespie at Walla Walla Community College for basketball.

Kelly also had a prolific career in football. He earned 1A Division II Long Pin Player of the Year and multiple all-state selections in the sport just to name a few.

“Who knows what will come up,” Kelly said. “Maybe I’ll decide I’ll try to walk on for football. Doors open and close all the time. We’ll see what happens. But for now, it’s been my childhood dream of mine ever since I picked up a basketball to play college (ball).”

“There’s a lot of small-town guys who can play, they just need to be given opportunities,” Kelly said. “I like that I’m going to be able to make it from Garden Valley. Hopefully the people who look at my story look at it like, ‘Hey, if he did it, I can do it too.’”