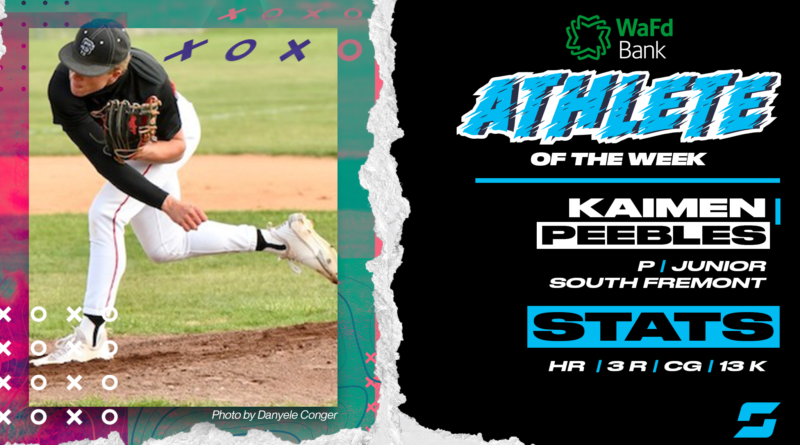 Congratulations to South Fremont junior Kaimen Peebles for being voted SBLive’s WaFd Bank Idaho High School Baseball Player of the Week for May 3-9!

The junior had a monster game in Soth Fremont’s 10-2 win over Sugar-Salem. He crushed a home run and drove in three runs at the plate and pitched a complete-game three-hitter on the mound with 13 strikeouts.

Peebles ran away with this week’s honor, receiving 96.59% of the total vote.

CJ Chastain, Hillcrest: Chastain threw a complete-game one-hitter to lift Hillcrest to a 5-0 win over Skyline in the 4A District 6 baseball tournament.

Grady Combs, Malad: Combs had a huge game on the mound and at the plate in Malad’s 13-1 win over Bear Lake. Combs belted four hits and pitched a five-inning complete game on the hill.

Scott Pemberton, Lakeland: Pemberton had two hits, two RBIs and scored the go-ahead run in the sixth inning to help lead Lakeland to a come-from-behind 15-10 victory over Timberlake.

Nate Rose, Idaho Falls: Rose went 3-for-3 with a double and three RBIs to help lead Idaho Falls to a 15-0 win over Thunder Ridge.

Martin Serrano, Pocatello: Serrano went 4-for-4 with a double, triple and four RBIs to lead Pocatello to a 14-2 win over Preston.

RJ Woods, Bonneville: Woods roped a key two-run single and finished with three RBIs to lead Bonneville to a 10-9 win over Blackfoot.