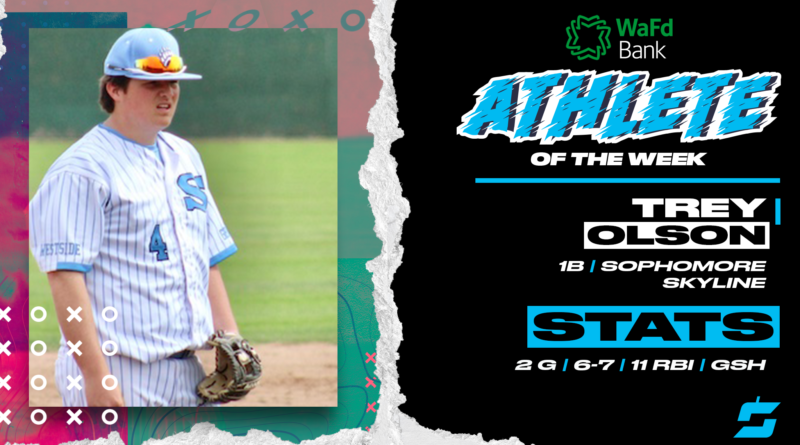 Congratulations to Skyline sophomore Trey Olson for being voted SBLive’s WaFd Bank Idaho High School Baseball Player of the Week for April 26-May 2!

Olson drove in 11 runs – including a grand slam – to lift Skyline to a doubleheader sweep of Shelley. Olson went 3-for-4 with seven RBIs in the first game and 3-for-3 with four RBIs in the nightcap.

Olson received 24.17% of the vote, beating out Idaho Falls’ Jaxon Sorensen, who finished with 19.06%. Thunder Ridge’s Kaysen Isom finished third with 18.99% and Highland’s Austin Hansen was fourth with 17.63%. There were over 68,000 votes tallied this week!

Landen Drake, Madison: Drake had two hits and four RBIs and got the start on the mound to lead Madison to an 18-3 win over Hillcrest.

Jaxon Grimmett, Blackfoot: Grimmett led Blackfoot to a 4-2 win over Bonneville with six strong innings on the mound – including 10 strikeouts – and a key RBI at the plate.

Austin Hansen, Highland: Hansen went 3-for-4 with five RBIs to lead Highland to a 17-6 win over Idaho Falls.

Hunter Killian, Pocatello: Killian led Pocatello to a district-clinching doubleheader sweep of Preston. He picked up the win on the mound in the opener, throwing seven innings and allowing just five hits and one run. In the nightcap he drilled a walk-off double in the bottom of the seventh to lift Pocatello to a 3-2 win.

Landon Merzlock, Skyline: Merzlock threw a no-hitter, striking out 16 in a 5-0 win over Shelley.

Dayton Robison, Bonneville: Robison went 2-for-3 with two RBIs – including a walk-off RBI double – to lift Bonneville to a 6-5 win over Century.

Jaxon Sorensen, Idaho Falls: Sorensen went 3-for-3 at the plate with two RBIs and picked up the win on the mound with five solid innings to lead Idaho Falls to a 13-3 win over Highland.