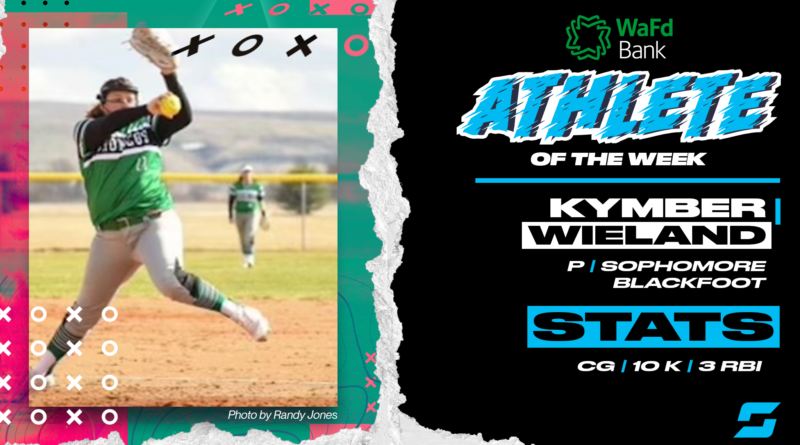 Congratulations to Blackfoot sophomore Kymber Wieland for being voted SBLive’s WaFd Bank Idaho High School Softball Player of the Week for April 26-May 2!

The sophomore led Blackfoot to a doubleheader sweep of Preston with her arm and bat. She pitched a five-inning complete game in the opener, striking out 10, then drove in three runs in the nightcap.

Weiland received 46.42% of the vote, beating out Marsh Valley’s Libbie Larsen, who finished with 42.1%. South Fremont’s Brynn Hammond finished third with 6.78% and Highland’s Marissa Mauger was fourth with 4.18%. There were over 60,000 votes tallied this week!

Olivia Crapo, Sugar-Salem: Crapo went 3-for-3 with two RBIs to lead Sugar-Salem to a 16-1 win over Teton.

Brynn Hammond, South Fremont: Hammond went 3-for-4 with three RBIs to help lead South Fremont to a 22-12 win over Sugar-Salem.

Hailey Humpherys, Bear Lake: Humpherys threw a five-inning no-hitter and went 3-for-4 with a home run and three RBIs to lead Bear Lake to an 11-0 win over Soda Springs.

Libbie Larsen, Marsh Valley: Larsen threw a five-inning one-hitter with eight strikeouts to lift Marsh Valley to a 12-0 win over American Falls. She also added a double at the plate.

Marissa Mauger, Highland: Mauger crushed two home runs – a three-run shot and a two-run blast – to lift Highland to a 7-3 win over Rigby.

Kailann Scoresby, Thunder Ridge: Scoresby pitched a complete-game three-hitter, allowing just one run and striking out 10 to lift Thunder Ridge to a 7-1 win over Idaho Falls.

Bryn Weeks, Madison: Weeks went 4-for-4 with four RBIs to lead Madison to an 18-2 win over Skyline.

Taci Watkins, St. Maries: Watkins threw a one-hitter in the opener and went 7-for-9 at the plate over both games to lead St. Maries to a doubleheader sweep of Grangeville.