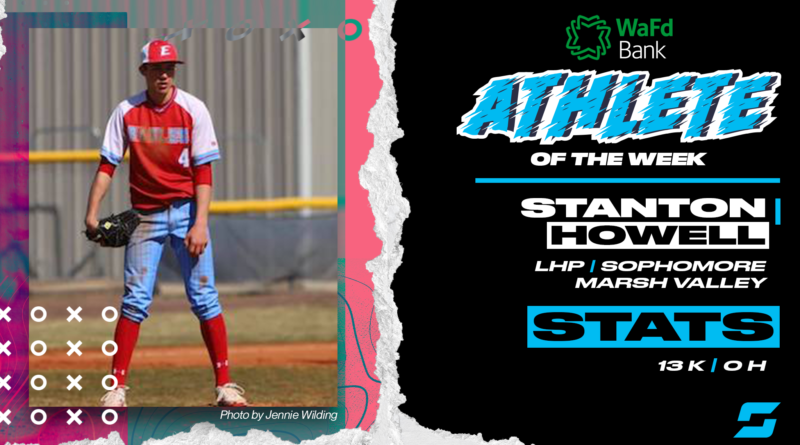 The sophomore pitched a no-hitter against Sugar-Salem, striking out 13 in a 3-0 victory.

Howell received 55.37% of the vote, beating out South Fremont’s Karter Yancey, who finished with 25.65%. Thunder Ridge’s Kolby Landon finished third with 18.07% and Malad’s Tanner Olsen was fourth with 0.15%. There were over 30,000 votes tallied this week!

Nick Hernandez, Glenns Ferry: Hernandez went 4-for-4 with five RBIs and picked up the win on the mound to lead Glenns Ferry to an 18-8 win over Wilder.

Dean Johnson, Prairie: Johnson roped four hits – including a homer – to help lead Prairie to a doubleheader sweep of Potlatch. Johnson also picked up the win in Game 1 with a complete game on the mound.

Logan Lockwood, Filer: Lockwood went 5-for-5 with a homer and five RBIs in Game 1, and picked up the win on the mound in Game 2 to lead Filer to a doubleheader sweep of Gooding.

Caden McCurdy, Century: McCurdy picked up the win on the mound – striking out six and allowing no earned runs – and added a triple at the plate to lead Century to a 3-1 win over Pocatello.

Luke Moon, Twin Falls: Moon helped Twin Falls to a doubleheader sweep of Preston with a key double in Game 1 and a victory on the mound in Game 2.

Tanner Olsen, Malad: Olsen went 3-for-4 with a home run, double and three RBIs to lead Malad to an 8-0 win over Bear Lake.

George Price, Skyline: Price pitched a complete-game shutout and went 2-for-4 at the plate to lead Skyline to a 3-0 win over Highland.

Karter Yancey, South Fremont: Yancey picked up the win on the mound, striking out 10 over six innings, and drove in two runs at the plate to lead South Fremont to a 5-4 win over Sugar-Salem.

Kolby Landon, Thunder Ridge: Landon went 5-for-5 with two RBIs to lead Thunder Ridge to a 20-10 win over Hillcrest.