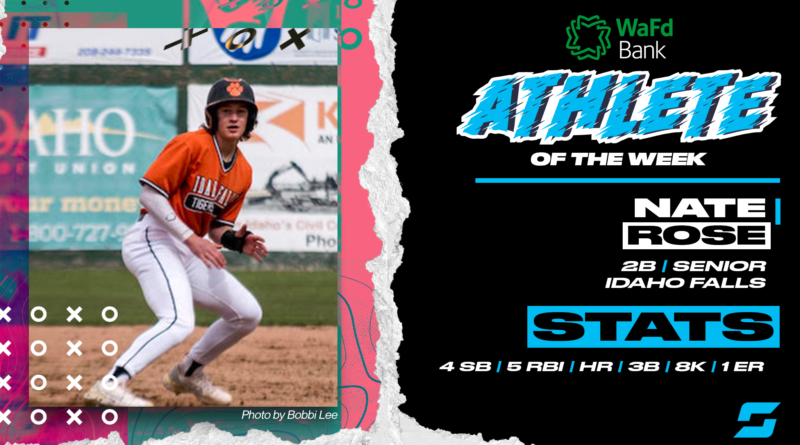 The senior had a great week against Madison including 4 steals, 5 RBIs, HR, triple, and received the pitching win with 8 Ks and gave up one earned run.

Rose received 47.55% of the vote, beating out Idaho Falls’ Jaxon Sorenson, who finished with 33.93%. Highland’s Jaxon Christensen finished third with 10.39% and North Fremont’s Hank Richardson was fourth with 7.44%. There were over 22,000 votes tallied this week!

Barrett Abendroth, Moscow: Abendroth went 3-for-4 to lead Moscow to a 6-5 win over Coeur d’Alene.

Jaxon Christensen, Highland: Christensen spun a four-hitter over five innings, striking out 10 in an 11-0 win over Rigby.

Jack Johnson, Genesee: Johnson roped three hits – including a home run – to lead Genesee to a doubleheader sweep of Potlatch.

Trey Olson, Skyline: Olson went 4-for-6 to help lead Skyline to an 18-16 win over Blackfoot.

Hank Richardson, North Fremont: Richardson led North Fremont to a doubleheader sweep of Rockland with his arm and his bat. Richardson picked up the win on the mound in a 9-0 shutout in Game 1 and blasted a homer in a 10-5 victory in Game 2.

Kenny Wells, Timberlake: Wells went 6-for-8 with four RBIs to lead Timberlake to a doubleheader sweep off Priest River.

Ben Zarate, Hillcrest: Zarate threw a complete-game two-hitter with 12 strikeouts to lead Hillcrest to a 9-1 win over Shelley.