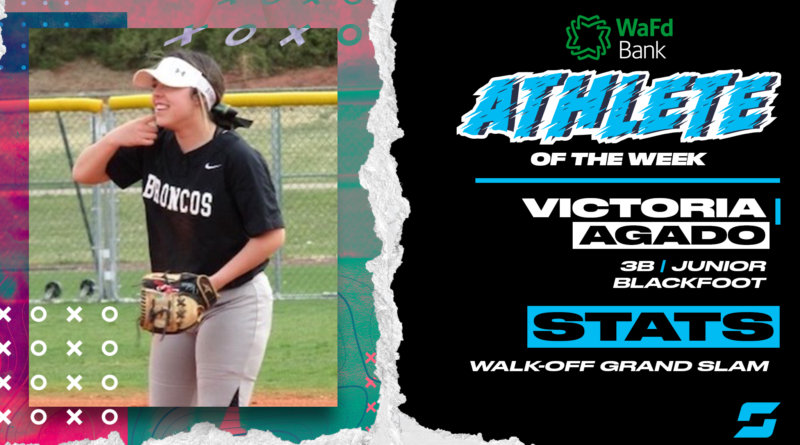 The junior hit a walk-off grand slam in the bottom of the ninth inning to lift Blackfoot to a 12-9 win over Thunder Ridge.

Agado ran away with this week’s honor, receiving 84.57% of the total vote.

Kahlea Dumas, Post Falls: Dumas went 2-for-3 with a home run and two runs scored to lead Post Falls to an 11-0 win over Sandpoint.

Aramy Glaser, Century: Glaser spun a gem on the mound, allowing just three hits and striking out nine in a six-inning13-0 win over Burley.

Kiwi Nelson, Bear Lake: Nelson went 6-for-7 with three doubles to lead Bear Lake to a doubleheader sweep of Declo and Mackay-Challis.

Acacia Pecor, Timberlake: Pecor pitched a five-inning shutout with nine strikeouts to lead Timberlake to a 24-0 win over Priest River.

Grace Sheppard, Rigby: Sheppard went 3-for-3 with three RBIs to lead Rigby to a 16-1 win over Bonneville.

Taci Watkins, St. Maries: Watkins threw a complete-game no-hitter with 17 strikeouts to lead St. Maries to a 3-0 win over Grangeville.