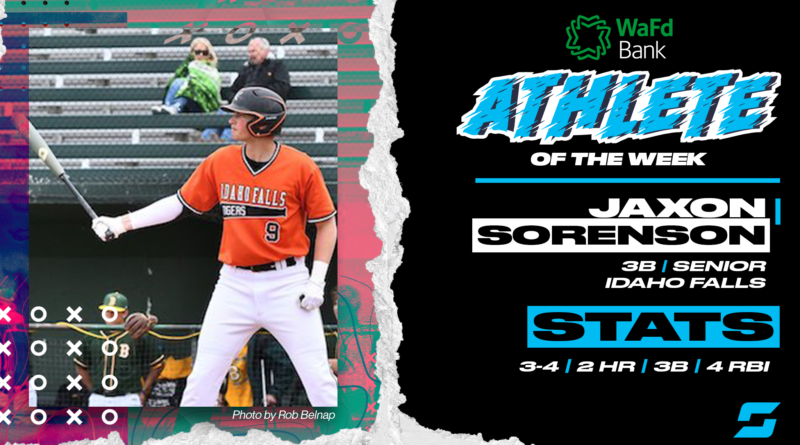 Sorenson went 3-for-4 with two home runs, a triple and four RBIs to lead Idaho Falls to a 16-2 win over Thunder Ridge.

Sorenson received 55.13% of the vote, beating out Highland’s Easton Eddie, who finished with 39.17%. Shelley’s Stockton Poulsen finished third with 3.46% and Post Falls’ Luke Davis was fourth with 1.08%. There were over 47,000 votes tallied this week!

Lewis Anderson, Columbia: Anderson went 2-for-3 with a double and four RBIs to lead Columbia to an 11-5 win over Nampa.

Bridger Erickson, South Fremont: Erickson pitched five innings of one-hit baseball and went 3-for-4 at the plate with an RBI to lead South Fremont to a 15-0 win over Bear Lake.

Nate Goodwin, Snake River: Goodwin was dominant on the mound, throwing 5 2/3 inning and striking out nine, and efficient at the plate – 2-for-2 with two walks and two RBI – in Snake River’s 11-1 win over Firth.

Ethan Miller, Post Falls: Miller picked up a win on the mound in Game 1 and went 2-for-3 with three RBIs in Game 2 as Post Falls split a doubleheader with Lewiston.

Stockton Poulsen, Shelley: Poulsen went 2-for-4 with two RBIs and scored the game-winning run with two outs in the bottom of the seventh inning on a passed ball to lift Shelley to a 10-9 win over Rigby.

Joel Simmons, Rigby: Simmons threw a five-inning no-hitter and went 2-for-3 at the plate to lead Rigby to a 15-0 win over Shelley.

Timmy Williams, Emmett: Williams was dominant over six innings of work, striking out 9 to lead Emmett to a 3-1 win over Ridgevue.