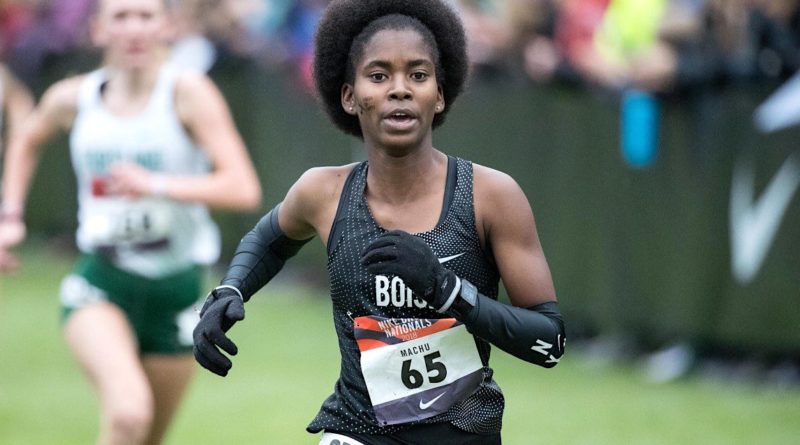 The walls of Rosina Machu’s room are covered with race bibs.

The Boise High School girls track and field star has at least 50 of them plastered into every nook and cranny.

That’s probably not the most uncommon thing for a runner. But it’s definitely not something the senior ever envisioned doing.

Machu went from growing up on the war-torn streets in the refugee camp of Shimbela, Ethiopia where she almost died of Malaria at 2, to becoming a three-time Idaho state champion and a seven-time state placer for the Brave.

“It’s such a special story,” Boise cross country coach Aaron Olswanger said. “It’s amazing she’s gone through so much and she is the person she is today. That really tells me a lot about who she is as a person and putting past challenges behind her and just really focusing on the future.”

Machu started competing in the fifth grade. But she was running long before that. Not from hide-and-seek or from playing tag on the playground like most kids, but from gunfire.

She spent much of her childhood engulfed in the aftermath of the Eritrean-Ethiopian War. According to the BBC, the death toll of the two-year border war ranged from the tens of thousands to as many as 100,000. Although the war ended in 2000, skirmishes ravaged the region for years.

“I remember seeing soldiers on the streets with AK-47s,” Machu said. “If I saw that now, it would probably scare the crap out of me. But back then when I was younger, it was just a common thing and I didn’t really know what it meant.”

The inside of her home didn’t serve Machu much comfort either.

She lived with her younger sister, mother and father in a small mud house with only a thin straw roof to protect them from the elements. Everyone slept in one room on two beds made out of goatskin with four rickety wooden polls serving as the frames.

With her mother expecting another child in 2007, the Machus finally escaped the turmoil. They moved to Pennsylvania before following a family friend from Shimbela nearly 2,300 miles east to Idaho where Machu’s unlikely career began.

But it took a few years.

Even with more freedom and opportunity, Machu still “hated” sports.

“I was never an athletic kid growing up. My dad was a huge soccer fan. He’d take me to soccer tournaments and try to get me into the sport, but I just hated it so much,” Machu said. “I never wanted to do any sports.”

Until she was forced to do so in the third grade.

As part of her P.E. class, Machu had to run the mile. She was first in her class with a time of eight minutes, fifteen seconds. Three years later, she broke University of San Francisco sophomore Eve Jensen’s city record by one second at 5:48.

“People were like, ‘You broke Eve Jensen’s record,’ and I’m like, ‘Who is Eve Jensen?’” Machu said while laughing.

Machu only lost two individual races in the seventh and eighth grades at North Boise Middle School. But the newfound success still didn’t change her mind.

“I really don’t know what kept me doing it,” Machu said. “I think I just did it because my coaches were like, ‘You’re really good. You should keep doing it.’”

Her perspective changed during her freshman year of high school. It’s when she officially met Jensen, and really burst onto the scene.

It started in cross country with six top-10 finishes overall, including third at state. She also reached the podium in track. Machu was part of Boise’s sixth-place 4×400-meter relay team.

Machu then helped Boise win its first cross country state championship in seven years by taking fifth in 2018. She also obtained her favorite bib to date that season at the Nike Desert Twilight XC Festival in Casa Grande, Arizona. Machu sported bib No. 471 while placing 11th with a time of 17:48.1 – it’s still the fastest time she’s ever run. Upon crossing the finish line, Machu handed out cups of water to all the other competitors.

“I think Rosina has really helped encourage a positive team culture during her time at Boise High by setting an example of being welcoming and including everyone,” junior Jamie Hamlin said. “Rosina is one of the happiest, most upbeat people I know. I think she is a successful runner because she is not only dedicated and hardworking, but she also has fun and loves her sport.”

Machu took up the mantle her junior year in cross country with the departure of Jensen to USF. The Brave didn’t miss a beat with Machu leading them to back-to-back state titles for the first time in 12 years with a sixth-place outing.

“That’s part of the joy of coaching, honestly, is to see these athletes really start to love running and love the process and showing up to practice every day and just putting in the work,” Olswanger said. “As soon as your fitness gets up and you start to buy in mentally, it’s a whole new ball game for a lot of kids. And Rosina was just one of them.”

Like thousands of other kids across the country, the start of the COVID-19 pandemic robbed Machu of basically her entire junior year in track. She competed in just one meet before the season was suspended and then ultimately canceled.

But she didn’t let it deter her.

Machu, who not that long ago wouldn’t train or run outside of practices and meets, found herself doing just that nearly every single day last summer. With social distancing firmly in place, Machu used the fitness app Strava to make sure she was ready to go for her last hurrah in cross country in the fall.

She was ready – and then some.

Machu began the season by taking third at the Ann Morrison Classic on Sept. 25. She never placed lower than fifth the rest of the season, which included helping Boise become the No. 1 team in the nation by MileSplit.

She ended her prolific cross country career in style with a runner-up finish at state. And by doing so, she joined the likes of Jensen and University of Washington alumni Emily Hamlin as Brave runners with four consecutive top-10 finishes at state. It was all part of Boise going 1, 2, 3, 5 and 7 for the first three-peat in program history.

It also got the attention of several colleges.

Machu had interest from the University of San Francisco, University of Idaho and the College of Idaho. But it was Gonzaga who she chose to sign with this past November. And when she arrives on campus in a few short months, Machu will become the first person in her family to attend college.

“I think Rosina was probably the most influential runner Boise High has seen in a long time,” Boise boys sophomore runner Shiva Rajbhandari said. “She came into the game with a lot of natural talent, but where others simply relied on their natural capabilities, she trained hard to be better, and that has put her at the top of the top.”

But Machu isn’t done yet.

She still has a little more than a month left in her already storied career with the Brave. And Machu is looking to do one of the only things she hasn’t done yet – win a track and field team state title. Boise hasn’t done that in six years.

If so, she’ll have to make room on that wall for one final race bib – another emblem for just how far she’s come.

“I’ve never really thought about it before. Just thinking about it now, it’s just a really crazy, incredible journey I’ve had,” Machu said. “I didn’t know where this would all take me, but I’m so glad it took me here. I wouldn’t change a thing.”