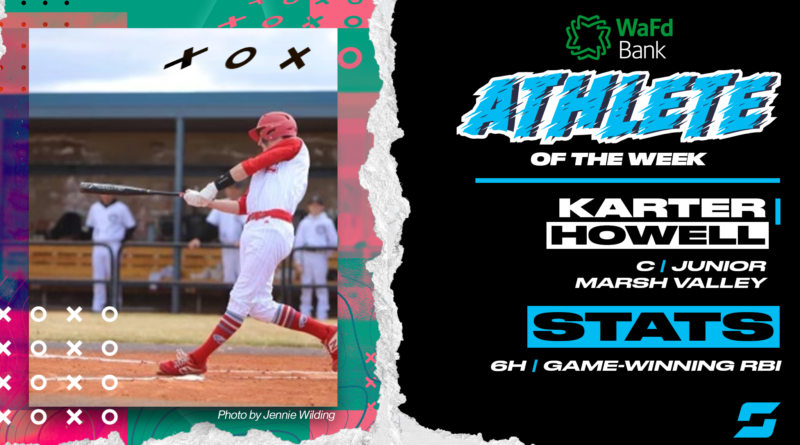 Howell had two hits to help lead Marsh Valley to a 2-1 win over South Fremont, then added four more hits – plus the game-winning RBI on a sacrifice fly – in a doubleheader sweep of Century.

Howell received 53.95% of the vote, beating out Marsh Valley’s James Bodily, who finished with 45.37%. Blackfoot’s Stryker Wood finished third with 0.29% and Highland’s Luke Davis was fourth with 0.12%. There were over 51,000 votes tallied this week!

James Bodily, Marsh Valley: Bodily spun an eight-inning gem, allowing just two hits and one run while striking out 16 to lead Marsh Valley to a 2-1 win over South Fremont.

Luke Davis, Highland: Davis went 3-for-4 with a double and two RBIs to lead Highland to a 17-6 win over Bonneville.

Ethan DiGiacomo, Columbia: DiGiacomo threw a complete-game no-hitter to lead Columbia to a 7-0 win over Vallivue.

Easton Stoddard, South Fremont: Stoddard went 3-for-3 with three RBIs to lead South Fremont to a 7-5 win over Rigby.

Stryker Wood, Blackfoot: Wood went 4-for-4 with three doubles and a triple to lead Blackfoot to a 6-4 win over Thunder Ridge.