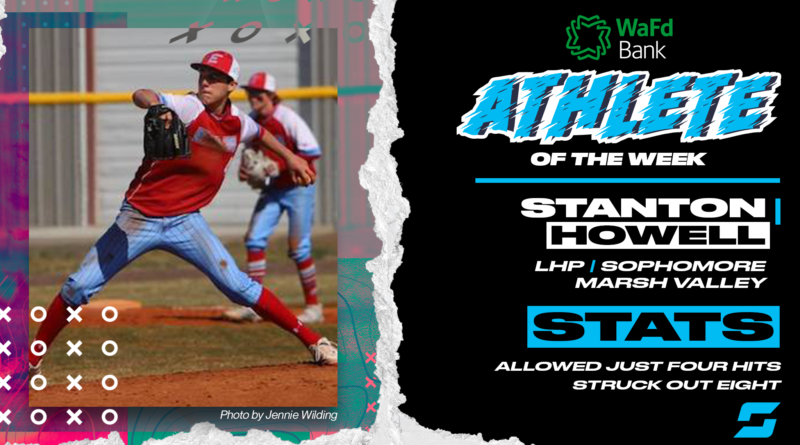 Howell led Marsh Valley to a 5-3 win over Ridgevue with six strong innings on the mound. Howell allowed just four hits and struck out eight.

Howell ran away with this week’s honor, receiving 68.18% of the total vote.

Peyton Briggs, Malad: In his first career start, Briggs threw a five-inning perfect game in a 10-0 win over Layton Christian.

Cody Newhart, Sandpoint: Newhart picked up the win on the mound and went 4-for-6 at the plate with four RBI to lead Sandpoint to a 20-4 win over Moscow. Newhart roped three doubles and a triple.

Lance Pike, Eagle: Pike threw four no-hit innings and went 2-for-3 with two RBI at the plate to lead Eagle to a 10-0 win over Madison.

CD Sharples, Post Falls: Sharples went 2-for-3 with a three-run home run to lead Post Falls to a 5-1 win over Burley at the ICCU Spring Break Classic.

Logan Taggart, Skyline: Taggert picked up a win over Caldwell, throwing 6 2/3 innings and allowing just four hits and two earned runs. He also struck out nine in the 8-4 win.

Brayden Turcott, Orofino: Turcott threw a complete-game two-hitter to lead Orofino to a 4-0 win over Priest River. He struck out 12 in his seven innings of work.

Zach Walsh, Middleton: Walsh went 2-for-4 with three RBI to lead Middleton to a 6-5, 10-inning win over Blackfoot.