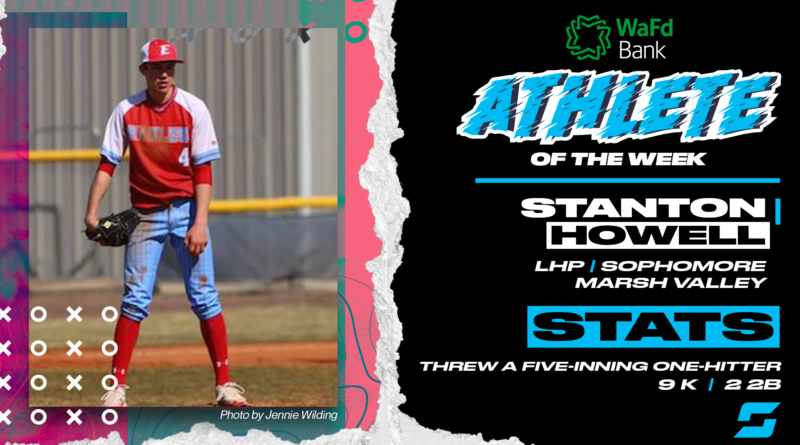 The sophomore threw a five-inning one-hitter – including nine strikeouts – in a 17-1 win over Teton. He also roped two doubles.

Howell received 54.5% of the vote, beating out Post Falls’ Jerad Taylor who finished second with 30.89%. Post Falls’ Tyson Rutherford finished third with 9.28% and Preston’s Chayse Oxborrow finished fourth with 3%. There were over 47,000 votes tallied this week!

Emilio Bengoechea, Rocky Mountain: Bengoechea homered and doubled to lead an offensive onslaught in a 15-0 win over Highland.

Karson Chugg, Preston: Chugg went 4-for-6 with a triple, double and four RBI in Preston’s 24-12 win over Burley.

Chayse Oxborrow, Preston: Oxborrow threw a five-inning one-hitter and added a double at the plate in Preston’s 7-3 win over Burley in game one of a doubleheader. He added a home run in the nightcap, which Preston won 24-12.

Tyson Rutherford, Post Falls: Rutherford threw a five-inning perfect game, striking out 11 in a 22-0 win over Lakeland. He added two hits and an RBI at the plate.

Landon Sullivan, Pocatello: Sullivan threw six innings of shutout baseball, allowing just one hit and striking out nine in a 7-0 win over Bonneville.

Jerad Taylor, Post Falls: Taylor blasted a three-run homer and added another hit in a 13-5 win over Lakeland.