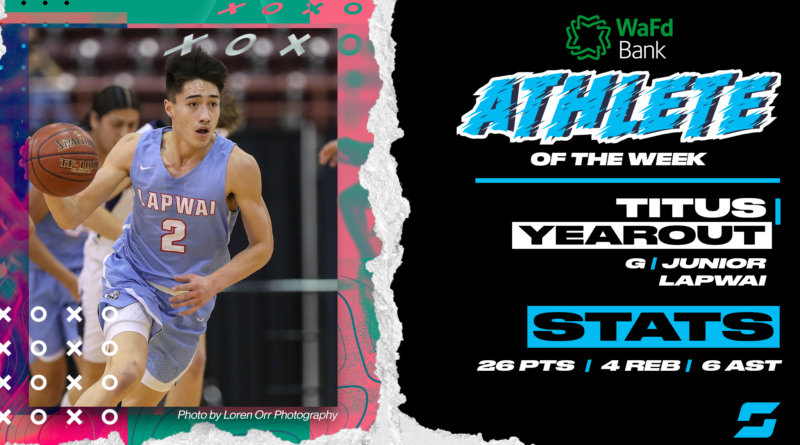 Yearout went off for a game-high 26 points on 11-of-15 shooting, with six assists and four rebounds in a 1A Div. I semifinal victory over Grace.

Covy Kelly, Garden Valley: Kelly exploded for 45 points, six rebounds and five assists to lead Garden Valley to an 88-73 win over Dietrich in the 1A D-II state title game.

Kase Wynott, Lapwai: Wynott had 23 points, five rebounds and three assists in Lapwai’s 82-60 win over Riverstone in the 1A D-I title game.

Nick Liebich, Riverstone: Liebich tallied 23 points and 13 rebounds in Riverston’s loss to Lapwai in the 1A D-I state title game.

Rhys Dill, Dietrich: Dill racked up 19 points and 16 rebounds in Dietrich’s 88-73 loss to Garden Valley in the 1A D-II state title game.

McKay Anderson, Meridian: Anderson racked up 19 of his game-high 23 points in the first half of Meridian’s 68-54 win over Lake City in the 5A state title game. He also finished with six rebounds, leading the Warriors to their first state title since 1992.

Tyler Medaris, Middleton: Medaris had 12 points and six rebounds to lead Middleton to a 47-45 win over Preston in the 4A state championship, giving them their first title since 1965.

Cody Hansen, Marsh Valley: Hansen had 14 points and six rebounds to lead Marsh Valley to a 58-51 win over McCall-Donnelly in the 3A state title game. It was their first state title since 1988.

D.J. Green, McCall-Donnelly: Green scored a game-high 21 points and pulled down six rebounds in McCall-Donnelly’s 58-51 loss to Marsh Valley in the 3A state title game.

Brody Rowbury, Meridian: Rowbury was dominant in the paint throughout the 5A state tournament, including an 18-point, 9-rebound performance in Meridian’s quarterfinal victory over Mountain View.

Tristan Gentry, St. Maries: Gentry drained the game-winning free throws with 56.5 seconds left to lift St. Maries to a 51-50 win over Ambrose in the 2A state title game. Gentry finished with 16 points and 11 rebounds.

Johnny Sugarman, Ambrose: Sugarman scored a game-high 20 points in Ambrose’s 51-50 loss to St. Maries in the 2A state title game.

Kross Taylor, Lapwai: Tayler had 22 points and five rebounds in Lapwai’s victory over Riverstone in the 1A D-I state title game.

Jayson Hall, Lakeside: The forward went off in the 1A Div. I medal-round victory over Grace with a game-high 32 points on 14-of-26 shooting with nine rebounds and five steals.

Taden King, Madison: The point guard poured in a game-high 30 points in a 5A state medal game victory over Boise. He had 21 points the day before in a semifinal loss to Meridian.

Brady Power, Dietrich: The forward did his best to keep up with Covy Kelly and company in the 1A Div. III title game with a team-high 26 points, including three 3-pointers, in a loss to Garden Valley.

Ben Blythe, Ambrose: Tallied 19 points (four 3-pointers), four rebounds and four steals in a 2A title-game loss to St. Marie’s, and 21 points in a state semifinal win over Wendell.